Everyone wants to catch that fish of a lifetime and big snapper feature in most angler’s target species. I have been fortunate to learn a lot from fisherman in Australia and New Zealand and now I want you all to share the techniques I have learnt.

First of all like all fishing you meed to be aware of how the fish live. snapper like most fish generally live at or near the bottom. They need structure to hide in whether it is reefs or weed beds. Like many fish, the young stay close to home so they can quickly retreat back into the comfort and safety of somewhere secure from everything that see them as a square meal! Meanwhile Mum and Dad go hunting and wander further afield. For this reason big snapper sit higher up in the water column. One thing for sure though is they always keep an eye on home.

Like most species of animals on our planet there is a feeding pecking order and snapper are no different. We have learnt this by the ferocity in which big snapper hit. 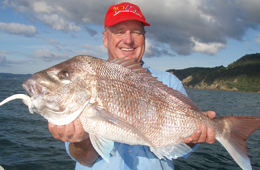 Snapper like a long thin bait shape so it is best to use a stick bait lure when fishing the bottom. Scent is most important, not for the big snapper swimming higher up in the water column, but for attracting all of the little “pannie” sized snapper on the bottom. Bozos new Kruncha Lures have been designed to catch snapper and as such are scented with pure squid oil. Snapper love squid so it makes sense to “match the hatch”. I will go more into the technique but the method in our fishing is we only fish the bottom and don’t worry about directly targeting the big snapper higher up off the bottom. Stay in touch with the bottom and what happens is the little pannies soon are attracted to the lure by the scent.

The big snapper swimming higher up are always alert for a feed and always look down to where home is in case they are threatened by a predator. They see the pannies gathering around and as they are the first to eat they swim in at full speed and grab the lure.

Big snapper generally hit at full speed and there’s good evidence to suggest that scent has a minor or non-existent role in their attack. If you catch pannies as soon as you drop your baits, move on to your next structure if you want to catch big snapper as it’s unlikely there’s one there. We generally get the big fish on the first or second drop.

The technique we have learnt really makes it interesting. We have found the less you do is usually the better as snapper are a bit like bream and get spooked easily. Remember you want to attract the pannies by the scent and not the action. The less action the lure has, the more they will be attracted – less to frighten them. They are babies and still timid eaters. If the bottom is a reef you will need a strong leader of perhaps 30lbs.

Main line should be braid and it is a very good idea to use multi coloured braid so you know exactly how deep your lure is. Colour changes every ten metres so just look at the sounder, if it says 40 metres let out 40 metres of braid. Most important is you want to continuously stay as close to the bottom as possible. It’s preferable to drift and do not anchor with soft plastics.

The movement past the pannies means there is some urgency to do something. Main line can be anything from 8lb to 30 lb but I generally use around 14lb Braid.

Try and fish as light as you can but what I use in almost all situations is a 5/8 ounce jighead such as the Berkley Saltwater series or Bozos coloured jigheads with reflective eyes. Eyes are an important trigger and make the lure look even more realistic.  It is important to keep you line between vertical and 45 degrees so what we do is use the boat motor to slow the drift down. As the line moves out of this vertical to 45 degrees angle hit reverse to slow the drift down until the line is in the right position again.

Every now and then feed out a bit more line just to make sure you are on the bottom. The rod tip must be pointing straight down the line or to the water. The technique is we just tap the rod butt about six times and then wait about another six seconds. Every minute gently lift the rod tip up high and then tap it the same way right the way down until the rod tip is back pointing at the water.

What this technique does is the tapping on the butt will send a shudder down the line. This is why the rod tip must be pointing to the water. This action represents a dying bait fish – easy target for the pannies . All you then have to do is hang on as the big snapper will just hit the lure extremely hard. It is best if the bottom is reef to have your drag as tight as the line-weight will allow.

Big snapper tend to embark on a long straight run once hooked and a firm drag will have them planing up off the bottom before they know what has happened. Once they stop the run you just turn their head and get on with the job of bringing them in. If you have the drag too light the snapper will take you straight into their home territory and you’re likely to get busted off as the braid rubs against the reef. At best it will be a very hard fight to get them up off the bottom. This is by no means the only technique we have found effective but this method is extremely reliable.

We have also found that lures with a Curly tail such as Bozos Smelt Galaxia in rigged 5” version make sensational drift baits. This can be done at exactly the same time as you use the bottom method mentioned earlier. 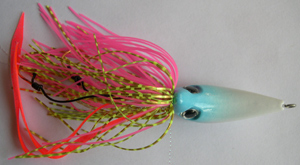 With this method you just cast up into the drift as far as you can – flip the bail arm back closed and put the rod in the rod holder. That is it. What happens is these lures only have about 7 grams of weight so the lure swims very naturally to the bottom. What is a must with this method is you need to have a lure with a Curley tail. The reason is they will keep swimming and swim at a very slow speed with good action. Once again the big snapper are swim at varying depths through the water column and you will pick them up with doing nothing.

Big fish are aggressive and the will hook themselves. What is so good is you can fish these two methods at the same time as the drift rod is just sitting in the rod holder. You just need to watch for the rod doubling over on itself as the monsters attack. Another method of fishing the higher water column is the new squid lead jigs such as Bozo Banana Squid.

These lure once again represent a small squid and the method is do nothing. Let the lure to the bottom in the same method as the bottom fishing method then just put the rod in the rod holder. These lures with their squid shape and fancy spinner bait type skirts have a lot of flash that really attracts fish. The banana shape is especially effective as it swims in an irregular swim action through its uneven shape as well as the movement of the boat.

All in all these methods will definitely help you catch more fish and hopefully the trophy fish you’ve been dreaming about.