Most soft baits are fished using jig heads, which come in a variety of sizes, weights and colours. The best ones feature strong, chemically sharpened hooks. For general fishing targeting snapper and other common table species, hooks sizes between 3/0 and 5/0 are most popular, but larger soft baits requite larger jigheads with bigger hooks. Colour is nice, but plain ‘lead’-coloured jigheads work just fine. Nitro jigheads come in a range of hook sizes and weight so cover just about any situation you're likely to encounter, Soft baits can be worked in different ways and various styles suit differing techniques. Shads can be retrieved almost like a spinner or metal lure, or else worked in short retrieves or lifts, followed by pauses where the lure ‘swims’ back towards the bottom. Grubs are generally worked with small movements of the rod tip and a slow retrieve; worms can be worked back very slowly, hugging the bottom, their extremely mobile bodies imparting all the action the lure needs.

Various other body styles each have their own most effective retrieve style. As a rule, the stiffer the bait, the more it relies on the angler for movement. Baits with extremely mobile bodies or tails will work seductively with almost no input from the angler. Jerk shads are amongst the most versatile and popular styles. I like them because they come in several sizes and they can be worked in a number of ways. The most common is a jerky ‘lift and drop’ retrieve that works well with virtually every soft bait type. But compared to, say, a grub, a jerk shad retrieve is more positive with larger movements of the rod and exaggerated pauses and drops. 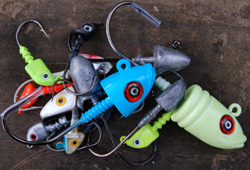 Jerk shads flutter and dart and their narrow tails move up and down, and from side to side, but compared to a worm or a curly-tail grub, they’re relatively immobile, so rely on jerky movements of the rod tip for their appeal. As well as the standard lift and drop retrieve, jerk shads can be worked in a series of hard jerks, with pauses between each one, skittered unweighted across the surface, retrieved at speed from almost any depth, ‘twitched’ in place, or trickled very slowly back to the angler. Jerk shads can be fished at any depth, from just under the surface to right on the bottom, depending on the amount of weight used and the speed of the retrieve. Berkley Gulp make a great range of jerk shads and are readily available at your tackle stores. 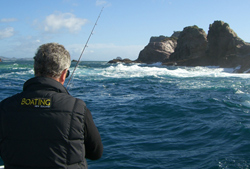 The key to most soft bait fishing is to cast ahead of the boat. While it’s possible to fish effectively from an anchored boat, especially in conjunction with berley, most soft bait fishing is conducted from a drifting boat.
In order to get the lure into the strike zone and in front of fish not already spooked by the boat passing overhead, cast well away from the boat in the direction of the drift. There is much less water drag on the lure and line if you cast ahead of the boat; the bait sinks quicker and in a more natural manner and you can get a way with lighter jig heads, which means a more realistic lure action and more positive takes. 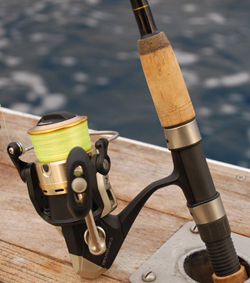 Superfine braided gel-spun polyethylene lines (GSP) l(e.g:  Berkley fireline) are not only low stretch and extremely strong, their fine diameter means minimal water drag, equalling better lure presentation, less weight and a more natural lure action.
The use of a sea anchor or drogue makes all the difference, slowing the speed of the boat’s drift and allowing soft baits more time near the bottom in the strike zone.

There is often not a whole lot of retrieving when fishing from a slowly drifting boat. That’s because you want the lure to stay close to the bottom. But the lure should make some progress, otherwise it’s simply bouncing on the spot. The speed of the retrieve is a balance between boat speed and water depth. But in every situation you must ensure you stay in touch with your lure so that you can react to a bite.

In deep water the lure may have only just got down into the strike zone as the boat passes over it, even though the bail has been closed for some time. It’s uncanny how many bites come when the line is vertical in the water column.
Of course, a soft bait works its magic throughout its descent, also attracting fish in mid-water; snapper and other species will often swim up to intercept a soft bait, so bites can come at any time.

The cast and retrieve described elsewhere on this page is typical for a jerk shad, but paddle-tailed baits – swimmers or shads – can be fished in much the same way. These baits also work well when steadily retrieved like a metal lure, or you can adopt the steadier lift and drop retrieve that works particularly well for curly-tailed grubs. The essentials are the same for every soft plastic. 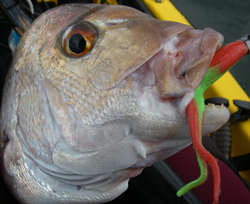 Sometimes a bite on a soft plastic is so violent it almost rips the rod out of your hands. If the fish is large and hungry enough, it will engulf the soft plastic, holding on to it long enough to ensure a positive hook-up. Very often the first inkling that a fish is interested in your lure is when the rod wrenches down.
But this is not always the case, especially since a lot of bites come when the lure is free-falling between twitches or lifts, or after the initial cast. These bites on a slack line can be difficult to detect and harder to turn into hook-ups. On some days they seem to mostly result in misses.

The hardest bites of all to convert into hook-ups are the ones that occur when the reel’s bail arm is disengaged. If you’re quick enough, it’s sometimes possible to jam your hand over the spool and strike before manually engaging the bail arm. But this is fraught with danger, especially if the fish is large. Superbraid is hard on fingers as well as gear: getting a loop of line around a finger when the other end is connected to a large, hard-fighting fish is no joke. You stand to lose skin and blood – at the very least. 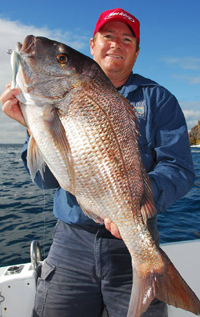 This is much less of an issue if you are using an overhead reel. Good quality baitcasters are excellent choices for this style of fishing, though less able to effectively fish lightly weighted lures.
Many bites are detected through the line as a slight bump or a ‘tick’ rather than a pull. Some bites are only felt as you lift the rod. These often register simply as weight, but may include distinct nods and tugs, not unlike a bite on natural bait. Strike at any kind of bump or contact you may feel through the line.

As soon as you start fishing softbaits seriously, you’ll realise just how important it is not to let your attention wander. Staring off into the distance or admiring the scenery will result in missed strikes.
Strikes may come at any time after the lure has splashed down. Soft plastics are at their most attractive to fish as they are dropping, either after the cast, or after the angler has raised or jerked the rod to impart movement to lure. With every lift or jerk, the lure darts forward and up in the water column, ‘swimming’ down again as the rod tip is dropped in preparation for another lift. That’s when a fish is most likely to take hold. 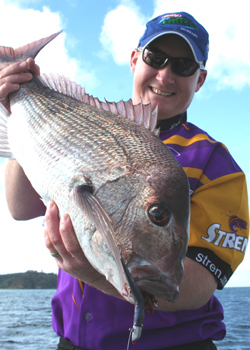 These strikes pose a problem for the angler. They come when there is no direct contact between the angler and the lure. Even a little slack line can give a fish enough time to mouth the bait and eject it again before the angler can set the hook. Sometimes the angler barely notices the bait has been taken.
Although you should strive to keep the amount of slack line to a minimum, you need to allow some slack line for the soft bait to work properly i.e. drop towards the bottom unhindered, since that’s when most strikes come.
The answer is to allow a little slack but watch your line like a hawk. At the slightest hesitation or movement in the line, lift the rod high to set the hook.

Brightly coloured lines are easier to see than dull-coloured or dark lines, especially in low light conditions or when there is a lot of glare on the water. It’s also much easier to track the progress of a distant lure when it’s connected to brightly coloured superbraid.

A typical jerk shad retrieve goes something like this:
• Cast the weighted lure a suitable distance ahead of the drifting boat
• Allow the lure to sink, controlling the line with your index finger lightly on the lip of the spool (spinning reel) or feathering the spool with your thumb (overhead reel)
• Engage the bail arm/reel gears when you think the lure might be approaching the bottom and give the lure a couple of twitches – many bites occur at this point.
• If you feel the lure touch down, or more usually, when you think you are close to the bottom, begin a twitching, jerking retrieve. This can consist of a couple of hard jerks, a long-ish pause so that the lure can flutter back towards the bottom, then some smaller twitches, winding a turn or two of line onto the reel between each one.
• Between lifts, jerks or series of twitches, allow  the lure time to sink. Drop your rod tip to create a bit of slack line so the lure can sink unhindered, but not too much, or you’ll miss bites. Strike at any movement in the line.
• Continue the retrieve all the way back to the boat, only winding in when the lure is directly below you. Many strikes occur right under the boat as the lure lifts off the bottom.
• Cast again, covering fresh ground.