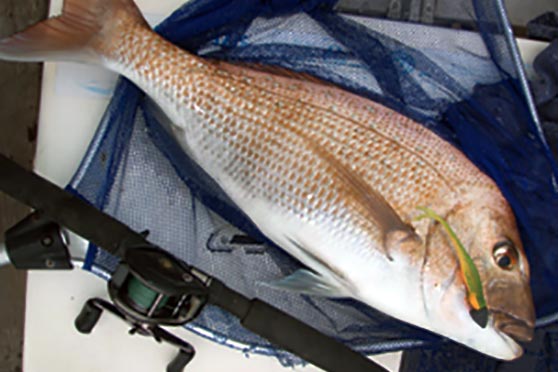 In the last year or so I have noticed quite a few keen soft bait anglers adopting high-quality overhead tackle to present soft baits to hungry snapper.

The reels of choice are either low-profile baitcasting models or else small conventional overhead reels, usually with level-wind mechanisms, such as the Swedish Abu 5600. These small reels balance the lightweight, high-modulus graphite rods so important to soft baiting success. With the outstanding fishing we enjoyed last summer, overhead rigs came into their own targeting schooling snapper in moderately deep water. 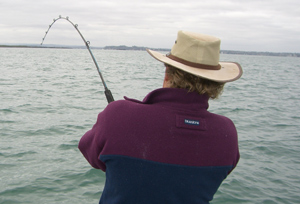 Overheads offer a viable alternative to spinning reels, with some advantages when it comes to maintaining contact with the bait. Responding to a bite is only a thumb-press away and the angler can control the bait’s descent throughout the drop by feathering the reel’s spool with the thumb. Having said that, I’m a great fan of allowing the bait to fall through the water as unhindered as possible, which is not an overhead reel’s strongest suit, but there are times when it pays to ‘swim’ the bait down by slowing its descent. Anyway, the relatively slower drop speeds typical of overheads can be mitigated somewhat by using slightly more weight, as outlined below. It’s certainly easier to react to a bite with an overhead reel and hook-ups tend to be more positive.

The other advantages relate to the way the reels are made. The better ones like the new Abu Revo Inshore feature strong, forged metal bodies, machined aluminium spools and good-quality, well-shielded bearings. They’re an inherently stronger design than spinning reels where the spool is supported at one end only.
Overhead drag systems tend to be smooth and powerful. In fact, even moderately priced overhead reels usually possess drag systems sufficiently robust to handle superbraid lines, at least in the short term, provided the rest of the reel’s construction is up to the task.
Uneven or sloppy tolerances between the reel spool and cage, cheap plastic spools and die-cast alloy gears are recipes for overhead disaster when you’re hooking powerful fish in deep water on superbraid line. Spend the money on good quality engineering for fishing satisfaction.
Gel-spun polyethylene fused ‘superlines’ such as Berkley’s Fireline are the line of choice when using spinning reels. Fireline works just fine on an overhead reel, but you will get even better casting performance and handling from a limp woven line like Stren superbraid. The sink rate maybe a little slower, but the castability is second to none.
In the past, I’ve tended to relegate my overhead soft bait rigs to fishing in deep water, or for species other than snapper. They work well with alternative rigs such as Captain’s Elevator rig, championed by Pure Fishing and the Berkley team, freshwater-style dropshot rigs with the hook tied close the main line above a sinker and various rigs featuring fixed or sliding sinkers and suitable hooks. Berkley’s range of extra-strong hooks with integrated weights/gripping collars is brilliant fished on an Elevator rig. 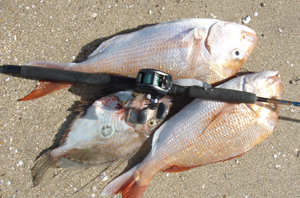 Lately I’ve been using overheads rigged with conventional jig heads and enjoying good success. Most of this fishing has been in deeper water, where it’s necessary to employ heavier jig heads to reach the strike zone, regardless of the tackle you’re using, but it’s worked OK on occasions in the channels and shallower areas as well.
To fish soft baits from an overhead reel, it’s mandatory to fish slightly heavier heads, because no matter how smooth the reel might be, it still relies on the weight of the jig/bait to pull line off the spool. No ‘free-spool’ is truly ‘free’.
Compared to a spinning reel, there’s considerably more rolling resistance, and this affects the speed of the drop and the lure’s action as it descends. There’s much less ‘flutter’ or ‘shimmy’ when you’re using an overhead, since the nose of the jig head is always connected to a taught line. If the jig head is too light, the lure sinks too slowly with almost no action.
As a rule of thumb, if half an ounce (16g) is sufficient to reach the strike zone using spinning gear (all other variables, such as line diameter and bait size being equal), you’ll need at least 5/8 of an ounce (18g) to fish the overhead.

In fact, I’d go up in weight still further, selecting a 3/4-ounce (22g) jig head to ensure my bait drops as naturally as possible.
Although good quality overhead reels cast extremely smoothly, it’s been my experience that casting ahead of the drifting boat in classic soft bait fashion works less well using overhead rigs than it does with spin gear. I put this down to the way the lure/bait drops.
Of course, there are exceptions. If the fish are really on the chew and rising in the water column to intercept falling baits, the gear you use makes little difference.
In general, though, you seem to do just as well with an overhead dropping the soft bait to the bottom below the boat and working it with the rod, dropping back to the bottom as the boat drifts away. Even though you’re fishing behind the boat (‘dragging’), the technique works well and the ability to thumb the spool ensures a better hook-up rate than is achievable when fishing a spin rod in the same way.
Lure/bait patterns make a difference when fishing an overhead. I particularly like soft baits with mobile tails, because they have plenty of action, even when the bait is ‘swimming’ to the bottom attached to a tight line pulling off an overhead reel.
Although I enjoy using a lightweight baitcasting reel for the sort of soft bait fishing described above — and there are many good-quality models to choose from these days, most specifically designed to fish with superbraid lines —for heavy-duty fishing I prefer conventional overhead reels.
Fishing soft baits for heavyweight species other than snapper is still in its infancy in New Zealand, but many large, powerful fish readily eat properly presented soft baits. Kingfish are a typical example, but in order to boat them consistently, it’s necessary to beef up your soft bait tackle.
Big snapper in deep water also demand up-scaled tackle, not just to control them once hooked, but to handle the heavier weights needed to get the baits down into the strike zone.
A beefed up soft bait outfit consisting of a lightweight graphite rod and a small, well-engineered overhead reel spooled with 10kg line is an extremely versatile rig ideal for deepwater snapper and other species.
If kingfish and/or hapuku are the main targets, it pays to go heavier again and use rods and reels capable of fishing 15, 24 or even 37kg braid. Many of the rods and reels developed for high-speed jigging are suitable for large soft baits, although I prefer a bit more length than is usual for new-generation jig rods, since length makes it easier to work the soft bait at depth.
As with all soft bait tackle, weight is a factor — soft bait fishing is active, so the gear should be easy on your body. A high-speed reel is an advantage and drag systems must be able to exert sufficient pressure to fish the line to its potential.
Heavy tackle soft bait fishing using big baits and weighty rigs is highly effective. Species taken include hapuku, bass, trumpeter, gemfish, kingfish, various tunas and many more. In some situations no weight is required, other than enough to cast the bait. Kingies love large, mobile soft baits retrieved at speed across or just below the water’s surface, as do members of the tuna family.
Speed is often the key to kingfish in deep water, too. Drop the bait to the bottom and crank it back towards the surface just as you would with a metal jig. Other bottom species are more likely to bite baits worked more sedately near the bottom.

For my money, overhead reels are the way to go when really powerful fish over 15kg are the target, or where split seconds make the difference between hooking and missing a fish.