Setting up for Squidding

Experienced squid/egi angler, Michael Walkley explains the basics of eging: how to do it, what gear you need and where to go in search of these tasty critters.

Unbeknown to most keen anglers, the waters of New Zealand’s coastlines load up with large populations of broad squid throughout the cooler months. These squid tend to inhabit the shallow reef structures that surround our coastlines. The favoured locations are amongst rocky foreshores and weed beds. However, this choice of habitat differs from their deep-water cousins, arrow squid, who tend to be prevalent in the offshore regions and deeper canyons.

Broad squid are identified by a large oval-shaped fin that extends through the extremities of their mantle. Broad squid are a small- to medium-sized squid generally averaging up to and around 30cm, which gives them a superficial similarity to cuttlefish.

During the early spawning season, which occurs around May, they exhibit elaborate mating displays. The paralarvae are a miniature replica of their adult counterparts. As a result, even at this stage they already show the capability to change body colouration immediately. The young squid are also highly active within the food chain, predominantly feeding upon larvae of species such as fish and crustaceans. Broad squid have the fastest recorded growth rates of any large marine invertebrate. As a result, they can achieve a weight of 600g within only four months of hatching. Unfortunately, this growth rate is short-lived – their maximum recorded lifespan is 315 days.

The diet of adult broad squid comprises mainly of crustaceans and small fish. They are found in the temperate and tropical waters of the Pacific and Indian Oceans. In New Zealand, with our slightly cooler waters, I believe a second spawn occurs around August-October, which is when the adults tend to be very protective of their nests. Their aggressive nature around this time makes them easier for the angler to target, particularly in the shallows. With the interest in targeting these amazing creatures expanding in NZ, we have had a huge influx of quality gear hitting our shores specifically designed to help tackle this quarry. From extremely fast action carbon rods to dedicated egi leaders designed to give your lure the best possible action in the water, we’re starting to see it all.

Here’s my take on getting set up to start eging.

These two elements are the most important things to consider when setting up for squid fishing, followed closely by jig selection. The rod and reel will ideally be balanced and light. When the fishing is tough, having a proper egi rod is paramount to feeling the subtle strikes of a squid coming up and nudging your lure. You have a split-second opportunity to strike before they drop the jig. During the early season, they are usually a bit more tentative, so the extra sensitivity is particularly important. Later in the season they generally steam-roll the lure, so having the perfect setup is not as necessary but will still improve your catch-rate. When selecting a reel, go for one that is balanced with your rod – usually a 1000 or 2000 size. A balanced setup will allow you to keep in contact with your lure and pick up any subtle movements. You should also look for a reel with a short retrieve speed so you can keep your jig within the strike zone for longer. Having good quality gear goes a long way to making your eging experience a positive one, especially at the beginning of the season.

An ideal egi line will be thin in diameter, very subtle and give as much feeling and contact with the lure as possible. In terms of leader, the lighter the better. Most people run six- to ten-pound fluorocarbon, and sometimes up to 15 in very snaggy conditions. Fluorocarbon is generally better than monofilament as it’s almost invisible underwater. With squid having such excellent vision, you need all the help you can get.

With such fine guides on delicate egi rods, you ideally want a very slimline knot. My preference is the FG knot, however, I find a back-to-back uni (especially on such fine diameter line) works well too. To join the jig to the leader, I opt for an improved clinch knot. ‘Quick clips’ are a grey area for me – they add weight to an already very delicately balanced set up, so personally I try to avoid them. I will happily re-tie my knots every time I change my jig, knowing that it’s just the one connection direct to the jig (not two via an additional clip).

There are a massive variety of brands, colours and sizes. Squid jigs are not identified by their weight like conventional jigs, but rather by their length, measured in inches. There are three main egi styles, with many subcategories; however, the sink rates are determined by shallow/basic/deep:

• Shallow: falls one metre in eight to ten seconds

• Basic: falls one metre in five to six seconds

• Deep: falls one metre in three to four seconds. 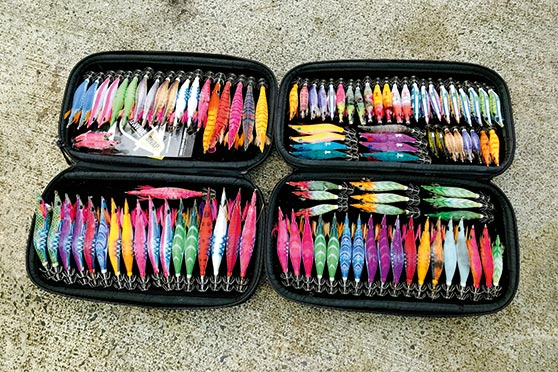 Having a variety of jigs on hand will give you plenty of choice when you arrive at your grounds. While you don't need as many as this, try to cover a range of colours, underfoils and sizes with your collection.

Egi lures usually comprise of multiple layers of cloth/foil and resin wrapped over the plastic structure of the jig itself. There is typically a cloth outer layer, a foil under layer and/or a UV-reflecting resin coating.

As a general rule, I don’t believe that the outer layer is as significant in enticing a bite as the under-foil layer is. Silver and gold under-foils do best in high light scenarios; reds, pinks and glow-in-the-dark instances, with outer cloth in mid greens, blues and natural colours work well during the day; and pinks, oranges and bright contrasting colours work best at night.

The clarity of the water will also need to be factored into choosing your jig colour. If fishing in dirty water, you’ll want a strong silhouette, but in clear water go for more natural, almost transparent colours. If you get confused, think to yourself: “If I was underwater, which lure would I see better?” Keep in mind squid don’t so much see in colour but do see hue and light refraction, so consider this when choosing your jig. 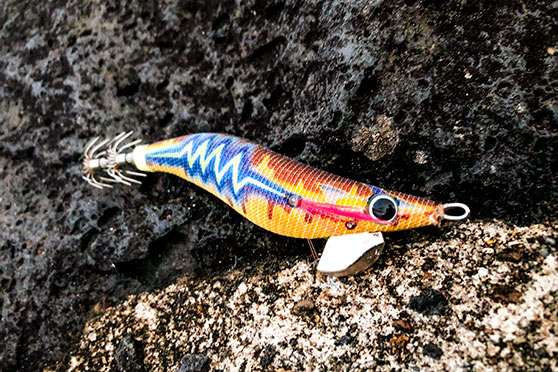 Squid jigs come in a range of sizes and colours.

Next we move onto how to target these impressive predators…

There are a few ways people target squid. One common method is float fishing, which involves casting a lure out under a float and letting it bob around over a weed bed. It seems easy, however, you still need to employ good line management.

When fishing off wharves or jetties, one option is to tie a ledger rig with a sinker on the bottom and run a jig off each arm. This can be worked in a jigging motion, just off the bottom. The squid will often hit the jig on the drop.

The alternative method, and my preference, is to egi. Think of it like soft-baiting; cast the lure out and allow it to sink to the preferred depth before working it with an erratic twitching motion and allowing it to sink again. Generally, the squid will hit the jig as it descends slowly and the take will often be when your lure is about a foot off the bottom. You can gauge this by knowing your depths and counting the seconds, based on the sink rates of the jigs. Keeping a loose drag here is important for two reasons: first, so that if a squid hits your lure, you won’t pull it from its grasp, and second, so that you don’t lose your jig if you get snagged on the bottom.

Squid tend to use current as a highway to move about from one area to another, however, when feeding, they often work low-current areas and back eddies. When selecting an area to fish, look for somewhere with structure and some current, even if only gentle.

Squid will use the current breaks to crawl up the banks and into foul terrain, hunting on the high tides and retreating with the low. Look for rocky terrain with a lot of weed or shallow sea grass.

The other option is to fish from structures such as wharfs and jetties, which allow a break in the current. Areas of low foul from two to five metres are perfect for shallow and standard (basic) lure types, while deeper 10-15m structures are best fished with deep-sinking lures – just stay focused when counting your lure’s sink rate.

Certain areas fish better on different tides. I have certain spots I only fish on the outgoing and others on the incoming. The main thing is to see where the bait (food source) is at during these stages of the tide and choose the tide with the least amount of flow. On a low tide, hit the rocky areas you are interested in fishing and check the tide pools for prey species. Prawns/small fish etc are what these squid are coming in to feed on and it’s worth taking note of these areas on interest.

Fishing in illuminated areas has its benefits, especially when baitfish are in the area. A well-lit wharf of structure can be a key to great success.

Lights can either work in your favour or ruin your night. You’ll often see squid change colour from dark red/brown when on the hunt and flash to ghost white when they pass through a lit-up area. They also pulsate these colours when other squid are around to show dominance, and which one is going to target the fish/lure.

The squid aren’t so much attracted to your light or the streetlights in the area, but instead are attracted to the baitfish that congregate near light. If you’re using a light such as a headlamp, keep it on a low setting to avoid spooking the squid. I often see newbies directly shine their lights onto a squid, only to see it swim away into the darkness again. Much like a human going from darkness to a light shone directly in their eyes, it isn’t something they appreciate.

It’s standard to squid-fish in the hours of darkness, particularly in the early season when the squid are smaller. Their vulnerability leads them to seek refuge amongst the weed beds until light levels drop enough for them to come out and hunt. This one fell prey to a well-worked jig in the dead of night.

As the squid grow and become better predators, squid fishing during the day becomes more of an option, with day-time boat fishers getting their share of the action too. 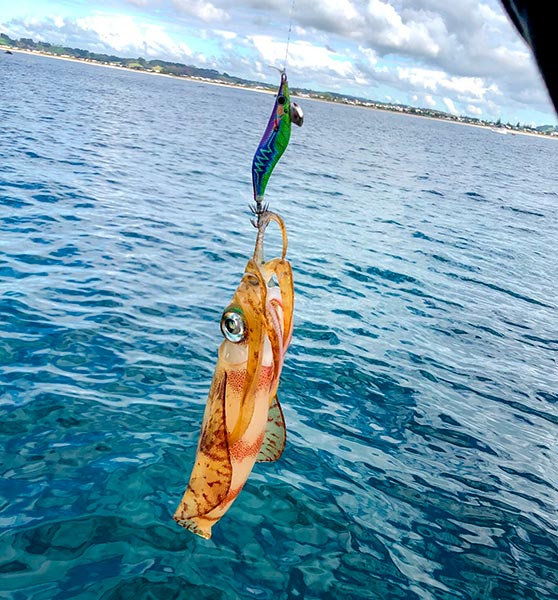 Later in the season, day-time squid fishing becomes more of an option.

Much like other fishing methods, dawn and dusk are the golden hours and actively fishing these times can make for spectacular results.

The traditional squid season begins with the onset of the cooler months. However, over the years I’ve continued to target them during our warmer months in water up to 19 degrees, and haven’t yet experienced a decline in the numbers or quality of squid being caught. This leads me to believe that broad squid go through multiple spawning stages. The early spawns are around May/June and there is also evidence of spawning in September/October. We may have a year-long fishery for these amazing creatures just waiting to be tapped into. 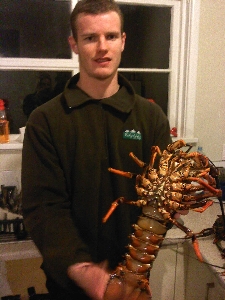