Setting Up a 450 Extreme for Fishing Most of Tony Orton’s fishing career has seen him running boats from 25ft right up 82 feet long. What they all have had in common is they used lots of fuel and took time to rig for a day’s fishing. He has always wanted a small fishing boat and in the past has had a 6-metre centre console, but it still gave him that big boat feeling. One day that all changed…

One a recent trip to Whakatane to visit Extreme Boats, they showed me a new model – a 4.5m fishing boat that could be powered by a 40-50hp engine with a tiller steer and side console option. As soon as I saw it, I knew this is what I had been looking for.

We sat down and went over the design. The team were very passionate about it as it was an affordable vessel and was set up with lure fishing in mind. There’s a casting platform, heaps of rod racks and a massive amount of cockpit space for its length. The new 450 Extreme only weighs around 600kg so can easily be towed by a small family car. Before I left that day, I had already placed my order for this new inshore fishing machine (without telling the family).

The next job was to spec out our new fishing boat, so we made a list of all the adventures we wanted to do, to help us make the right decisions when laying it out. The list included family cruises and fishing in our local estuary, inshore fishing, trout fishing in the central North Island lakes, Far North coastal fishing, and a possible road trip to the South Island to fish the lakes and, when weather allows, some coastal fishing for tasty blue cod.

With all the travelling we had planned for this boat, the first thing we wanted to do was upgrade the trailer. We wanted a trailer that would tow and launch well and stand the rigours of the many kilometers we would do with it. The GFab alloy trailer was the perfect choice that would ensure hassle free towing and less maintenance than a steel trailer – and it looks bloody good as well!

We predominantly fish with lures, be it soft-baiting, jigging, Engetsu-style fishing, topwater and even fly fishing. With all that in mind, the first thing we chose to put on the boat was a MinnKota trolling motor to assist in all these different angling aspects. The MinnKota is a game changer, slowing down drifts, holding us in one spot and allowing us to set a course at very slow speeds. It has changed my fishing forever. To power the MinnKota we opted for a lithium battery to save on weight and space. It will also last longer, charge faster and hold its charge better than a conventional battery.

Having a great sounder and chart-plotter is paramount for helping find and catch fish. As it’s predominantly an inshore boat and we’ll be fishing under 80 metres, Garmin recommended we go with the ECHOMAP 95SV (9-inch screen) with the GT56UHD transducer giving us a chirp sounder with 350 watts of power and ClearVu and SideVu at 500 watts. The sounder has been fantastic for picking up snapper and trout in 15-55m and gives us a super clear picture even when running. We opted for the Echomap screen as it is both touch screen as well as push-button controlled, the latter making it super easy to navigate if you have wet hands. 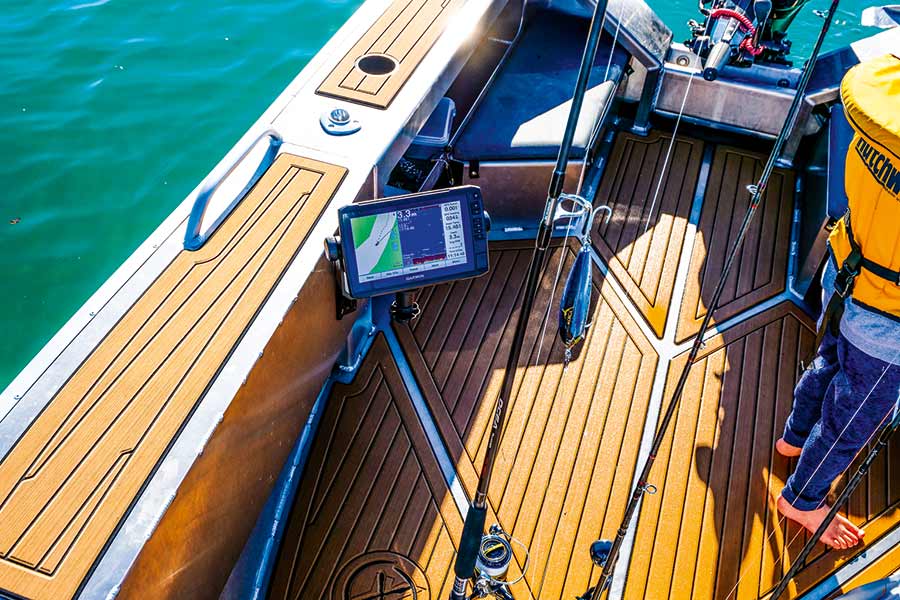 The sounder can rotate and be viewed from wherever you're fishing.

We mounted the screen on the starboard side forward of the helm seat so it’s easy to use and see when driving. Ram Mounts have a great mounting system that enables us to pivot the screen so it can either be facing aft or forward. This has worked out to be a great idea, especially if you are up on the bow casting and driving the vessel with the MinnKota remote. The screen also clips out of a mounting case, which is a great security feature. It’s easy to get on and off and all the wiring stays connected to the mounting system.

As it’s a small boat, space is important. The 450 Extreme has large side pockets which are great for safety gear, tackle box, ropes and knives etc. It was nice to cut all my tackle down to just one waterproof tackle box that fits nicely into the side pockets. Now I only take what I am going to use that day. One tackle box with everything we need. It's so nice not taking half a tackle store with you.

We opted to fit a couple of cup holders in the gunnels. Obviously they are great for holding drink bottles, but they also make great lure holders. The Kai Cooler insulated kill bag has been a great space saver as it can be stored under the casting platform, and it’s also great for putting bigger fish in and doubling as a dry bag. 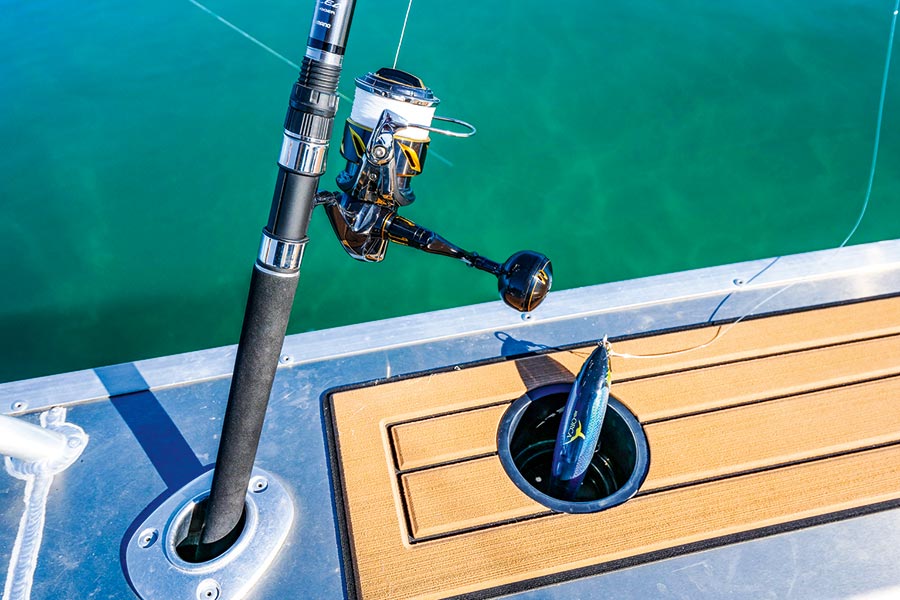 The cup holder - a great place to store lures as well as hold drink containers.

We spent a lot of time looking for the perfect power option and felt the Mercury 50hp tiller steer ticked all the boxes for us.

It has a good balance of power to weight ratio; the engine is not too heavy, which is very important for a light boat; and it’s got heaps of torque to get the boat out of the hole quickly. We run the boat with a 25-litre tote tank that sits under a seat across from the helm seat.

The Mercury tiller steer system is a game changer. The longer tiller enables me to comfortably shift my weight forward and all the controls you need are at your fingertips. This includes ignition, gear shifter, throttle, tilt, tensioner to firm up or loosen the steering and even a trolling function to reduce the speed of the boat at trolling speed (great for livebaiting or trolling for trout). The tiller can be setup with different angles and heights to suit the skipper. I did one mission a few weeks back around our coastline that included lots of exploring and moving spots, all for a miserly six litres of fuel!

To cover all our fishing options, we needed lots of rod storage. In total, we have 10 rod holders on the boat. There are two on the bow and four on the gunnels on the aft part of the boat. We also have a custom-made rod rack mounted in the middle of the boat just behind the IceyTek cooler bin. The four-holder rod rack does two things: it stores rods when we are motoring or trying to get them out the way and it secures the cooler bin and stops it tipping and moving aft. It has been made at a height that keeps the IceyTek cooler very stable whether you’re lying, standing or fishing on it. Care for your catch

I really love IceyTek cooler bins. Not only are they hard wearing, but they also keep ice frozen for days and they pretty much have a size in their range for every application. When setting up the casting platform, it was easy to get a bin from the range that was the right height so the top of the casting platform and cooler bin were even.

We ended up putting a 56-litre bin on the boat and the team at Sea-Dek put a matching deck grip on the top of the bin with a measuring device routed into the grip. Depending on what we are fishing for and how many fish we decide to keep, we also have a 70 litre Kai Kooler insulated kill bag. This gives us options to either just have ice, food and drinks in the cooler bin and fish in the kill bag, or just use the Icey-Tek for fish.

We have only had this boat now for a few months and it’s been one of the most rewarding and fun boats we have ever owned.

My two-year-old daughter and I have had our first fishing adventure together in it and she caught her first snapper. My six-year-old son is learning to drive the boat and with the tiller steer, he is learning the basics and feels more confident doing this in a small boat. The tiller steer gives him a better ‘feel’ for how trim and steering affects a boat.

We have towed it to the Rotorua Lakes for a trout mission (we’ll talk about that one next month!), and we have been on family trips up our local estuary. This boat will give our kids some of their greatest childhood memories; it’s affordable to run, quick and easy to use and the clean-up at the end of the day is minimal. Having a small boat has opened new areas to explore and being so light and easy to launch, you can beat the crowds at the boat ramp.

Because it so simple, the desire is there to use it more and more. To sum it up: small boat fishing rocks!