“Ray-riders” – not a fishy biker gang, but a special group of kingfish, known for their ‘ray-riding’ around harbours, particularly Tauranga Harbour. Gian Booysen looks at the science behind the fascinating relationship between stingrays and “ray-riding” kingfish.

Who would have thought the noblest of fish may well have a lot in common with the tapeworm? In recent years a relationship between the yellowtail kingfish and the stingray has been observed in the shallow waters of New Zealand. Catching a kingfish, for many saltwater fly-fishers, is the pinnacle of fishing and what is better to aid the angler than a large black undulating target?

So why do pelagic predators such as kingfish accompany stingrays? Globally, certain bony fishes like kingfish and trevally, are observed travelling with sharks and rays (cartilaginous fish). The bony fish travel alongside, on top of and even briefly below the sharks and rays, and feed, or appear to feed, in close proximity. So the relationship in New Zealand between our short-tail stingray, and yellowtail kingfish is not exceptional. But how does the stingray assist an already top predator like a kingfish? 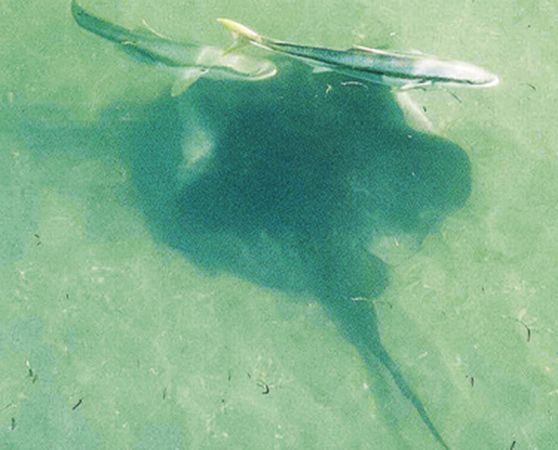 A phenomenal drone shot of two ray-riding kingfish. In this instance, both kingfish are swimming precisely in tune with the stingray.

One of the main characteristics that cartilaginous fish boast and bony fish lack, is the possession of electroreceptors. Electroreceptors are composed of a series of minute, canal-like, pore openings, situated around the mouth of sharks and rays. Each pore is comprised of a gelatinous fluid leading to a rounded structure, called an ampullae which originally referred to a Roman flask. Ampullae have a concentration of synaptic nerves and the complete structure is called the Ampullae of Lorenzini which allow sharks and rays to detect the week electrical fields put out by living creatures ­– even when they are buried under the sand.

All organisms produce these weak electric fields, called bioelectrical fields. Electric fields are more noticeable in a saltwater environment as the salts in the water make it more strongly conductive.

Bioelectric fields are produced by muscle contractions, respiration, osmoregulation, and even brain activity. For example, if you were to run from, say, a lion, a signal is sent from your brain to relevant cells by means of an electrical current. This current is a series of electric explosions along your neurons, known as an action potential, accomplished by the manipulation of ions. Taking into consideration we are thought to have around 100 billion neurons within the human body, there is no shortage of electricity. Professor Theagarten Lingham-Soliar states that “In behavioural experiments with sharks and rays, sensitivity to changes of 0.01 microvolt per centimetre (one microvolt = 1/1,000,000 of a volt) along the body surface has been found for the ampullae of Lorenzini.”

Of course, baitfish also emit these weak bioelectric fields. Many are agile, rapid in movement and display shoaling behaviour to combat predators. Consequently, it is difficult for predators, such as kingfish, to catch them. Unless the pack of predators work together, energy expenditure for one fish is too high and often not worthwhile.

The New Zealand sand flounder is different. Its morphology is not like that of agile baitfish, it does no schooling to evade predators, nor is it built to outrun them. Rather, it solely relies on camouflage. By blending in with surroundings and scuttering up sand to conceal itself beneath, it hides its presence and thus appears to be perfectly adapted to live in an environment patrolled by vision-reliant predators.

If that sounds too good to be true, it is. The well-adapted flounder, a species who evolutionarily has done well to combat visual hunters, is readily disclosed to another species, the short-tail stingray, which possesses the above-mentioned Ampullae of Lorenzini. With these electrical receptors, it scours the bottom in search of flounders, crustaceans and other potential prey who unwittingly emit a bioelectric field. Once compromised, the prey may attempt to flee from below the stingray, only to be exposed to the accompanying kingfish. It is no longer camouflaged on the bottom, nor hidden beneath the sand, and due to its shape stands no chance to out-dash the accompanying predatory fish. A kingfish, by moving at a slow pace alongside the scouring stingray and allowing it to uncover its next potential meal, expends far less energy than when actively hunting baitfish. Accordingly, this forms an ideal way of gathering food. 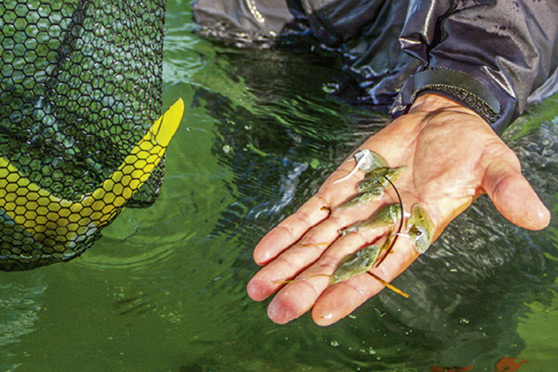 A kingfish in the net giving an insight into what it has been feasting on. The hand of Alex Waller, from company Trippinontrout, holding numerous juvenile flounder.

A symbiosis in which one organism (called the parasite) benefits at the expense of another organism, usually of a different species (called the host), is a parasitic relationship. Consequently, the kingfish capitalizing on the feeding behaviour of the stingray for its own benefit (in a similar fashion to that of a tapeworm) is parasitic if this is done at the expense of the stingray. However, it is more likely to be weak parasitism as the stingrays appear not to attempt to get rid of the kingfish, suggesting they are not prejudiced and still receiving an adequate amount of food.

It is further possible that the composition of their diets may not completely overlap, the stingray perhaps eating a higher concentration of crabs and the kingfish eating more flounder. The stingray’s diet, therefore, could be largely unaltered by the presence of the kingfish. This suggests that the relationship could be classed as one of commensalism in which one species gains and the other is neither hurt nor disadvantaged.In my view, it is more likely that the relationship between kingfish and stingray is one of weak parasitism. I consider it likely that the kingfish do eat some of the organisms that would have been eaten by the stingray, were it not for the behaviour of the kingfish.

However, to get a better indication of the nature of the relationship, more evidence is needed. For example, an analysis of the gut contents of stingray and kingfish would need to be contrasted. A comparison of the stomach contents of various stingray – including ‘rays which have fed with the presence of kingfish as well as those who have not – in the same geographical area would also need to be made. This would give a better indication of how similar the kingfish’s diet is to that of a stingray, and if it is to a point where the stingray may be disadvantaged.

It is to be noted that this type of symbiotic relationship between kingfish and stingrays is not unique, and similar relationships are observed throughout the world. Some common examples are trevally, permit, cobia and bonefish all swimming with rays. In New Zealand specifically, trevally and kahawai have been seen accompanying stingrays. Interestingly, kingfish are also observed with bronze whalers.

For the fisherman, this relationship has unintended benefits. Stingrays are often large and dark in colour, inadvertently forming a target that can be seen from a great distance. Furthermore, in comparison to predatory fish, stingrays are slow travelling, allowing fishermen to pursue the ray and remain with it for a prolonged amount of time. Moreover, stingrays congregate in our shallow environments, estuaries and harbours, giving anglers an opportunity to catch large, ocean-going fish within shallow (often very shallow) environments. 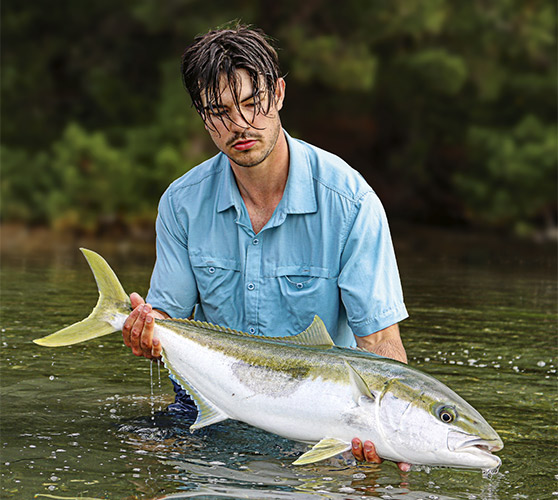 The writer with a memorable ray riding kingfish, caught on a fly rod, in surreal surroundings.

The purpose of this article was to give insight into a wonderful phenomenon observed in New Zealand. It serves to show that patterns, relationships and obscure events on the water can be explained. Moreover, I hope this article inspired you to investigate your own fishing conundrums. The reward for understanding why a fish has been caught far exceeds that of catching it by chance. 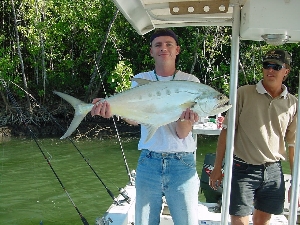