My standard way of rigging lures these days is based on the development work done by well-known Australian lure maker Peter Pakula. His concept of using a small stainless yachting shackle to connect the leader to the hooks revolutionised lure rigging.

The advantages of incorporating the shackle are that the hook or hooks can be detached for cleaning, sharpening and storage, and that you only need enough hook rigs for the lures that you have in the water (plus a couple of spares) – a great cost saving when a single 12/0 stainless big-game hook may cost $20.

Detaching the hooks when not in use also reduces tangles in the lure bag, and many of the dangers associated with razor-sharp hooks.

While it may be aimed at billfish, this rig works equally well on other game species, including tuna, mako sharks, kingfish, and a wide range of tropical sport and gamefish like wahoo and mahimahi.

I have caught a number of striped marlin in New Zealand and Mexico using hooks as small as 6/0 (which wouldn’t look out of place fishing for snapper), and while they do set easily and their lighter weight doesn’t sand-bag the action of smaller lures, there are reasons that I still prefer the now-traditional stainless-steel in-line J-hooks for fishing with larger skirted game lures.

For example, if you intend to release the fish, playing it until the point of exhaustion won’t do much for its survival odds. Or if you get an early shot at the leader when light-tackle or tournament fishing, you should take the opportunity. With a green fish on his hands, the wireman will have the most fun it is possible to have standing up, but to handle a hot fish, a strong hook and leader are necessary.

Research from the USA has indicated that plated hooks such as those with cadmium, tin and other heavy-metal finishes are implicated in the blood poisoning of fish that may be left with a hook in them. Because of the limited amount of free oxygen in sea water the ‘rusting out’ process may take a very long time indeed, perhaps even longer than the life-span of a striped marlin.

Stainless steel, on the other hand, is inert and living flesh has little problem with it, which is why stainless screws, plates etc. are used in the reconstruction of broken bones in humans. Consequently, along with the other advantages of stainless mentioned earlier, and the fact that fish that strike trolled lures are nearly always mouth-hooked, I am quite happy using stainless hooks on marlin lures.

The two most popular patterns are the Mustad 7691S (which has a slightly incurved point) and the Mustad 7732S (which has a point running parallel to the shank). I believe that the incurved 7691S is superior, as the point penetration angle is better when the hook is pulled directly from the eye. This is especially true of a swinging hook, but not so important with a stiff rig. However, I have seen the parallel point perform well when a stiff rig is used. Take your pick.

As far as hook size goes, the standard rule of thumb is that the gape of the hook should fit over the lure head, but be aware that the bigger and heavier your hook is, the more it tends to smother the action of your lure, so don’t overdo it. In practice, hooks for smaller marlin lures are usually about 8/0-9/0, medium lures about 10/0, while big, blue marlin-sized lures may need 12/0 hooks.

It is important to set up the lure so the hook point faces up when it is trolled, allowing the best chance of a hook-up in the soft upper surface of the fish’s mouth or in its jaw. This can be achieved in different ways:

One hook or two?

You can use one or two hooks on a lure. When chasing Kiwi stripies, the crew I fished with for some years tried both systems for long periods and in the medium to long term there was no significant difference in catch rate between using one or two hooks. Getting the hook back out of the fish for release was certainly easier and safer with a single hook, and of course, one hook is lighter that two, so the lure swims better. It is cheaper to rig that way as well.

• A length of stainless-steel welding rod

Step 1: Crimp the cable around the eye of the hook. Try to get this tight so that the hook will only move in the loop under pressure. 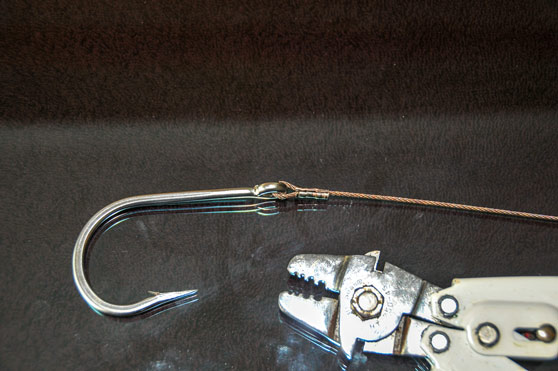 Step 2: Measure out the cable so that the hook rig complies with IGFA regulations and the hook point is equal with the end of the skirts. This way the skirts will not tangle around the hook. Allow for the length of the shackle, then cut the cable. 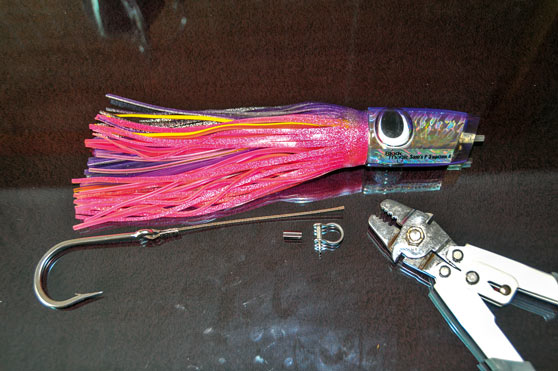 Step 3:  Make the loop in the end of the cable and crimp an eye where the shackle will be attached. 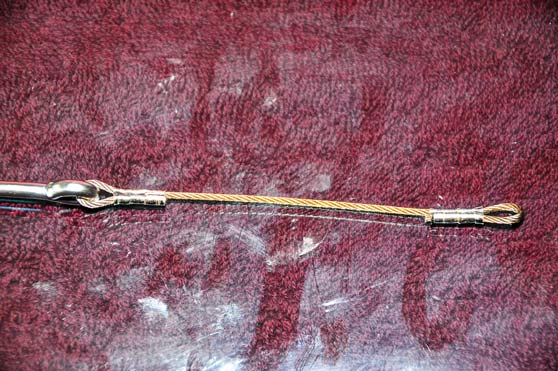 Step 4: Lay a length of stainless welding rod alongside the cable to the outside ends of the crimps and cut to length. This will add stiffness to the rig and prevent the cable flexing, fatiguing and eventually breaking (although you may need to bend the stainless rod straight again after catching a fish).

Cut a length of heat-shrink plastic to cover the bottom sleeve and hook eye, the cable and stainless rod. (This piece of heat shrink may need to be a larger diameter to the piece in step 7 to accommodate all of these components). 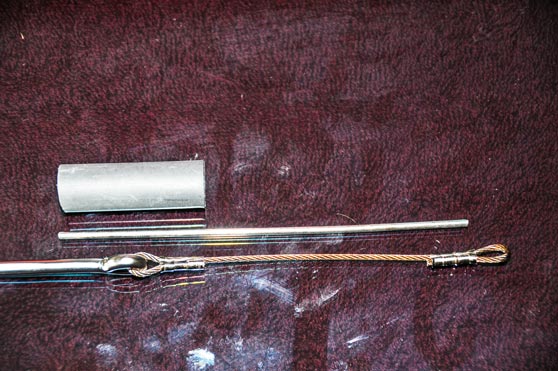 Step 5: Use a heat source like a stove element, cigarette lighter or candle, to shrink the plastic into place. Be sure the hook and wire link are set in a straight line as the shrunken plastic is what will make this into a stiff rig. 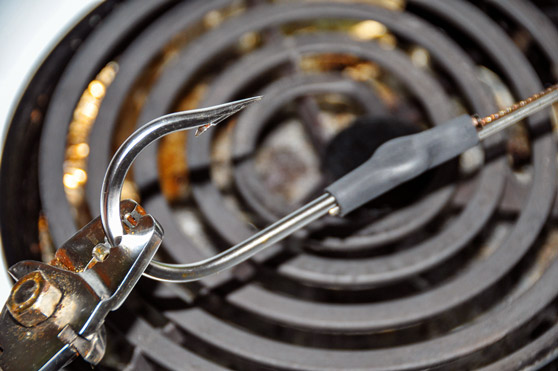 Step 6: Cut a second length of narrower heat shrink tube and slip it over the cable/rod section so it overlaps the first section of heat shrink at the bottom and the second sleeve at the top, leaving the eye where the shackle will be attached, exposed. 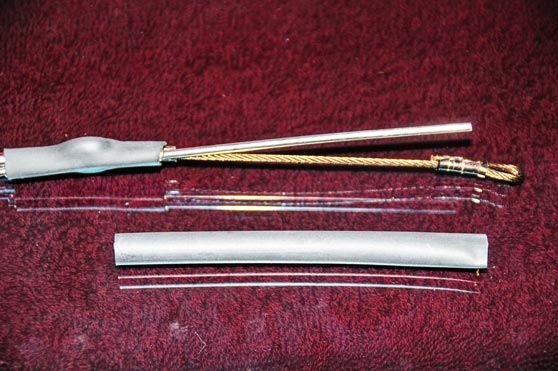 Step 7: Apply heat to shrink it down. 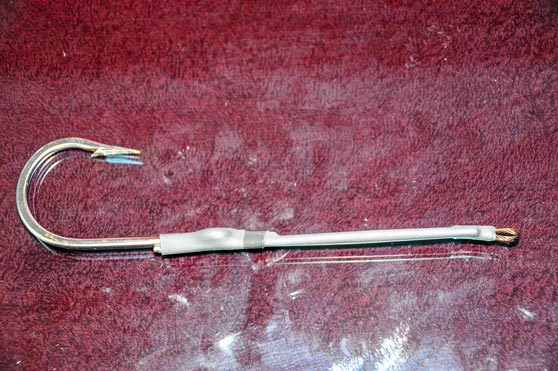 Step 8: The hook rig may now be attached to the lure/leader with the small stainless yatching shackle.

The heat-shrink plastic serves multiple purposes. It guards against wire sprags, acts as a forensic indicator to help you determine what species of fish a ‘mystery strike’ may be, holds the stainless rod in place, and tidies up the rig. Do not use aluminium crimps, as they will corrode from the inside, in reaction with the wire.

Some people use mono for the hook link, but I prefer wire as it can save the lure or hooks from loss to makos. The wire also allows me a safety margin with wahoo, Spanish mackerel, barracuda etc. when I fish in the tropics. This is dead simple, as most of the work is in the hook rig. Choose your leader material – 400lb mono (around 2 or 2.2mm diameter) used to be the standard for marlin, although some argue that they get better results with 300 or even 200lb leaders, especially on smaller lures. Thinner leaders are less visible and allow the lure to move in a more natural manner, contributing to a higher strike rate.

Although I have caught marlin on conventional tackle with leaders as light as 27kg, I have also seen a lot of damage done to even heavy leaders by billfish. I like a safety margin!

I have tried fluorocarbon leaders on lures as it is less visible to fish but find it a stiff material which tends to kill a lure’s action. I reckon the boat’s wake mostly hides the leader, anyway. The story is different wit live baits).

Before rigging, check the IGFA regulations for leader length and combinations with double line. There have been plenty of records and big money tournament prizes refused when the leader–double line combination has been over length. And don't forget to allow for the hook and shackle assembly; this is considered part of the leader assembly, too.

• Remember that these measurements are taken to the outside of any knots or snap/swivels, and also include the hook assemblies. The trailing hook must be at least partly inside the lure skirts, even if it is just the hook eye.

There are three places to guard against chafing and consequent leader wear.

The first is leader end loop where the snap and swivel are used to attach the leader to the mainline. Without protection for the end loop, the metal snap will wear away at the leader. Once a groove is started, which holds the snap in one place, wear proceeds more rapidly.

A second wear point is at the other end of the leader, where the hook rig is shackled on. if the lure is reasonably active, wear at this point can be rapid.

There are a number of ways to protect the leader at these two points, including a stainless thimble, a ring-and-grommet, or a sleeve of plastic tubing.

A third wear point is where the leader emerges from the front of the head. Most lure manufacturers these days use a plastic tube through the middle of the lure head, which stops any chafe, but some lures still incorporate brass sleeves, or have heads made of metal, especially jet heads. These types of lures require further protection for the leader, such as plastic tube sleeves. 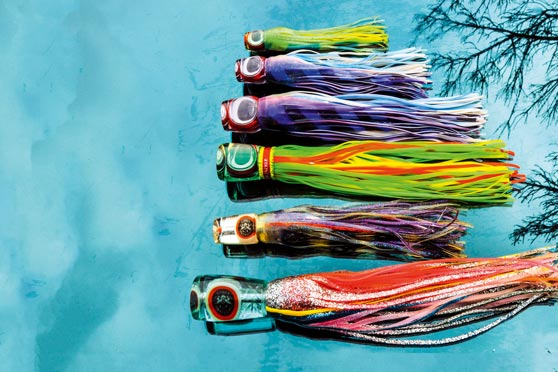 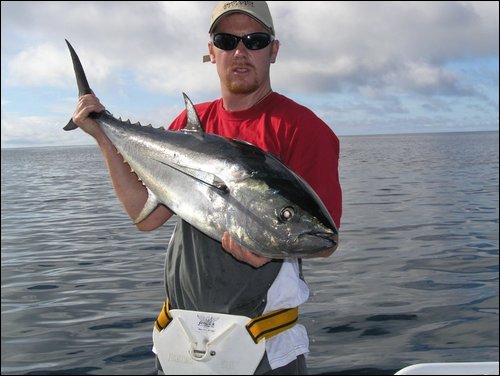