It’s now autumn and game is at its peak. Red stags are bulked up with muscle while trout are coloured up and fat. In the case of trout, it’s a good time to take one or two well-conditioned fish for the pot, though not the biggest ones whose genes we want out there for the years ahead.

One good spot to target a fat rainbow is the Upper Manorburn Dam, located in the Central Otago high country behind Omakau and Poolburn. It has long been known as a place where fish numbers are good, fish size averages a little over a kilo and any legal fishing technique brings success.

The following is the Otago Fish and Game description of the waterway:

“This irrigation storage reservoir of 700ha has a shoreline of 14km. It has evolved as a rainbow fishery, the first of these being released in 1917. This water opens on November 1 each season and closes on May 31. There is a boat launching site at the dam wall. Also, an area on a gravel beach half a kilometre up from the wall is often used in southerly winds. This dam is in two sections. The lower basin is deep water with some shallow areas in McGovern’s Bay. This continues through the Narrows to the Greenland Reservoir that is quite shallow. There is only one access point to this water, at the end of the Moa Creek road that leaves the Ida Valley road at the now retired Poolburn Hotel.”

March and early April is a good time to go to Manorburn because there is little chance of catching a slabby fish, and a real chance of catching the best of the fish living in the dam. If you are really lucky you may fluke a day that coincides with a late cicada flight.

The track in to the Manorburn is rough after rain and, on my most recent trip, that was the situation three of us encountered as Geoff towed his boat in to the dam. It was a slow trip avoiding ruts and gouges but we launched the Stabicraft without too much trouble.

We had been worried that the dam might be too low to get into the top basin but our fears were unfounded and a short boat ride at speed saw us at our destination.

The most successful fishing method here over the decades has always been bait fishing, but lately we have done very well trolling, so that was our preferred option this trip. We had fly rods on board as well, but sadly the few rises we saw petered away soon after our arrival and there was no cicada activity. When the cicadas are going the fishing is, in a word, awesome.

Geoff has struck this phenomenon a couple of times. On one trip when he was without his fly rod he resorted to picking floating cicada off the water, inserting a small hook and flicking them back out. He caught four trout in no time as the fish were very unsophisticated and slashed anything twitching on the surface.

We used two trolling rigs. On one side of the transom we had a lead line harling rod with a 13-gram brownish Cobra on the end, while on the other side we ran a rod with a top line attached to a bibbed gold Rapala.

Don had a hook-up on the Rapala before I even got the Cobra in the water, and it gave a short, spirited fight before it was landed. It was quickly despatched and popped in the ice-filled chilly bin. Don was on a roll and landed two more in quick succession before one was caught on the leadline.

The Manorburn is one of the most popular fishing locations in Central Otago, but the top basin is really only accessible by boat. There are a couple of farm tracks snaking in to the area, but the reality is that snow or rain could trap anglers at any time. A few huts are dotted around the shoreline and the opening of the Manorburn each season is circled on the calendars of many of the locals.

We trolled around the top basin’s shoreline all morning and by the time we stopped for lunch had added to the early bag in a steady fashion. Don had four, Geoff had two and I had three. All were in great condition, so only four had been released. The largest two trout each weighed about 1.3kg. 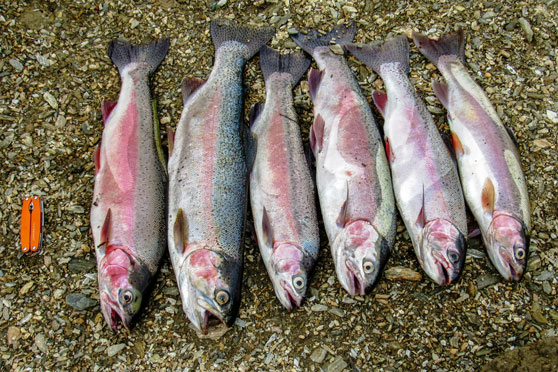 We pulled in to a sheltered bay and went our separate ways along the shoreline after lunch. Geoff and Don took their fly rods hoping the fish might start rising while I took my spinning rod.

Lure colours such as red, copper and pink have been popular on this waterway but I have also found that white can bring a bit of attention. On one notable morning I landed a limit of rainbows on a dressed white Panther Martin spinner and I have stuck with it when fishing here ever since that ‘out of the box’ day. I have not experienced a limit since, but I usually land at least one.

The fish were not exactly starving this session and my tally after an hour was two good strikes but no fish. Finally, fishing at the edge of an inlet, I was whacked hard just out from the shore and a big rainbow, by Manorburn standards, took to the air. He put up a great fight, but his enthusiastic strike was his undoing as he was well hooked. I finally eased him ashore and he was to prove the last and tenth fish caught on the trip. He weighed 1.6kg and is the largest trout I have caught on a lure from Manorburn. 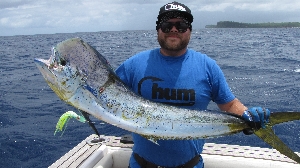