As spring merges into summer, I am becoming restless, checking gear, trolling the Work-Up and SST websites and badgering old hands for any clues about the new season’s prospects.

All this puts a bit of jazz into my 82-year-old body, despite some well-meaning advice from friends and family that it might be time to give this long-range kayak fishing game away. The good thing is, I don’t feel my age and don’t wish to start talking myself into premature psychological redundancy.

Mind you, going after pelagics in a small kayak miles from shore in the temperamental Tasman Sea is always risky, but luckily I have grown up in an age where common sense was still highly valued and the sport of extreme thrill seeking had not been born. Since I do not want to end my life prematurely, I regard safety as my first preparatory topic. 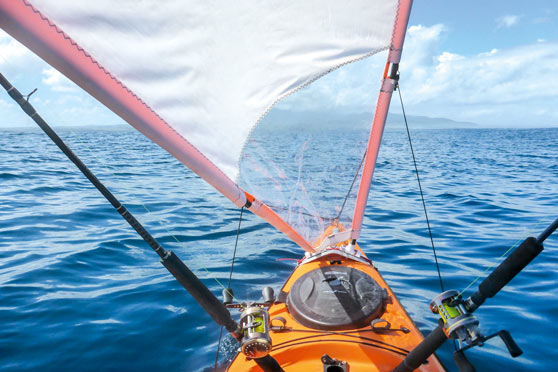 Risk is relative and can mean different things to different people. Only a few days ago my old tuna hunting mate, Brent Sharp, sent me photos of his solo kayak rounding of treacherous Cape Reinga on his way to paddle around the North Island.

Safety comes first when going out wide. You need to have confidence in your fitness, kayak, paddle, lifejacket, VHF radio, PFD, PLB, your re-entry procedure and your ability to operate all your equipment in your sleep.

Make sure your PLB and VHF radio is attached to your lifejacket and not stored in the kayak because two of the most common fears of kayak fishers are sharks and becoming separated from the kayak in a capsize.

Statistics show that shark danger mostly resides in your mind, but losing your kayak in strong winds after a capsize remains an ever-present danger. You can prevent this calamity by using a lanyard so you remain connected to your kayak.

Apart from dependable equipment, my other reliable backstop is the Coastguard, the true guardian angels that surprisingly few kayakers factor into their safety plans. It only takes one radio call and you have established a virtual lifeline to the shore.

To round off my safety prep for a long offshore trip, I check the various marine forecasts on Swell Map, National Marine Weather, Buoy Weather and New Plymouth Harbour Sea Conditions reports. However, regardless of how benign the forecasts might look, when I finally get to the water, if I don’t like what I see, I don’t go out.

A great deal about finding pelagic game fish has already been worked out by the big boat marlin guys, and luckily most of what they have learned also applies to kayak fishing targets like skipjack and albacore tuna. These fish are part of the vast food pyramid that supports apex predators like marlin, sharks and larger tuna. In a nutshell, find the food fish and you will find the big game fish. 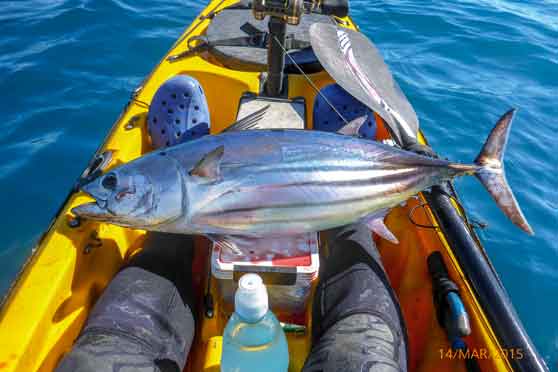 Even though on-board technology has made this a lot easier, there is still a lot of barren water out there. You can narrow the odds by studying online SST charts which show water temperature, interesting temperature breaks and nutritious concentrations of chlorophyll, around which a food pyramid quickly develops. Some of these features are within reach of kayak fishers and with the help of onboard GPS technology are well worth exploring.

While this knowledge reduces the search area considerably, some species of seabirds can pinpoint fish activity. Petrels, terns, shearwaters and gannets hunt the same baitfish as game fish do and from their elevated vantage point are always on the lookout for what is happening under the surface. 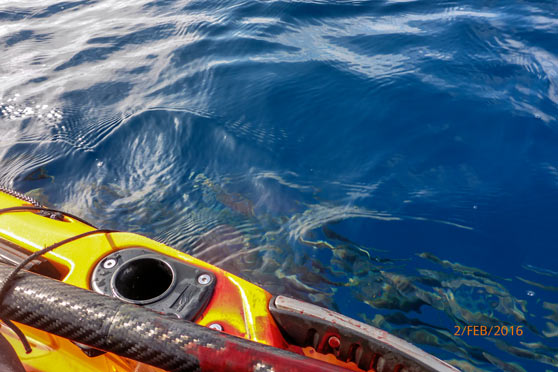 If you do not know already, learn how to identify these indicator seabirds – not only what they look like, but also how they hunt for food. With this knowledge you can start focusing on them as a valuable guide.

For instance, the game fish season coincides with the tern chick rearing season, keeping both parents hard at work to find work-ups out wide. You can get your first directional clue (sometimes even before you have left the port) from the angle the terns are flying out and the others are coming back in with a saury in their beaks.

Out on the water, birds circling, diving or just piling in on a distant spot are all signs of a game fish feeding frenzy. Lots of birds sitting on the water are always worth a closer look too. They might just be resting and digesting their catch, but more often they are waiting for the tuna, and dolphins to round up another bait ball. 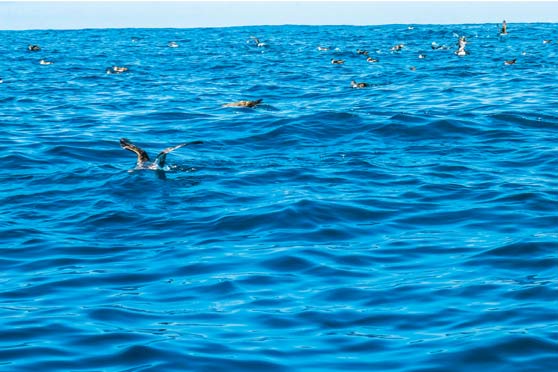 Most of the time they are also hunting for food. A good fishfinder/chart-plotter is a great help as it can alert you to sudden water temperature and colour changes. These indicate temperature breaks and current lanes – both recognised fish holding features.

There is a heap of relevant information on YouTube that will give you a much better grounding than I could cover in a short article. Chasing pelagics is like any hunting: the more you learn about your target’s behaviour and the better you tailor your hunting style to suit, the more ‘luck’ you will have. 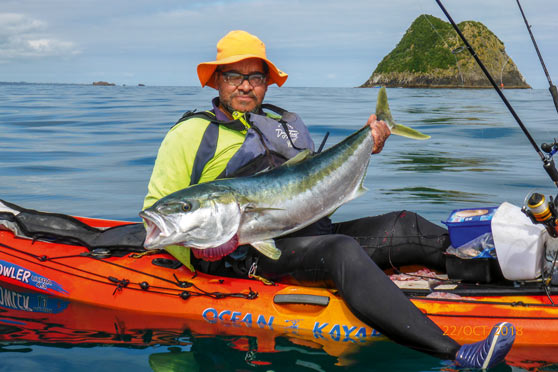 We all know how easy it is to get stuck in a fishing rut, especially when you have found a method, a lure or a location that has regularly produced the goods. If this is happening to you, experimentation and adaptation are well-proven antidotes.

Even though my mates and I have gone after tuna for close to fifteen years, we still learn new things every time we go out wide. At first it was just trolling and experimenting with lures. Then, a few years later when we noticed an annual kingfish run turning up at the same time as the tuna, Martin started catching them on jigs between trolling runs.

Last year, Rodney began trolling rigged pilchards inside his homemade Seawitch rig and scored kingfish and tuna when our trolled Rapala-style lures remained untouched. I am sure this coming season will see more rigged dead bait trolling and experimentation. As they say: “There is a new idea under every wave.” 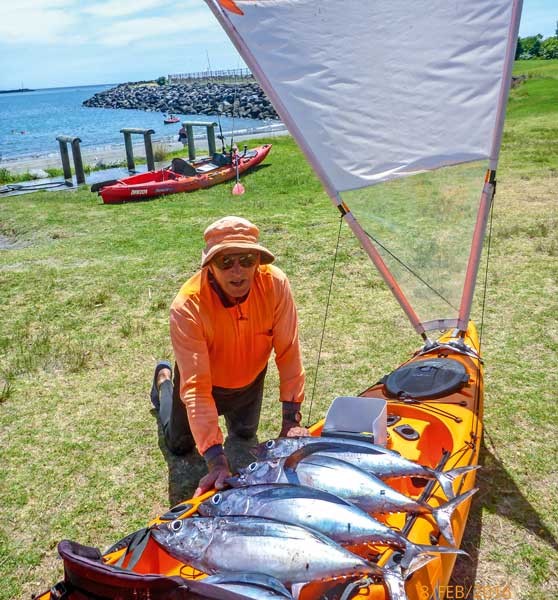 From my perspective, tuna and kayaks are a match made in heaven. There are several areas around the North Island where marlin are within kayak range, but fishing for them from such tiny craft has been too risky. Now that the first marlin has been caught from a kayak in New Zealand, the spell has been broken and the bar has been raised. I already know of several top fishers who are trying hard to emulate this tremendous feat. Needless to say, their preparations need to be at an even higher level. 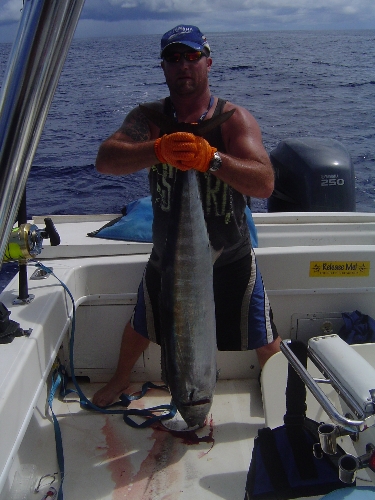