Few sports are more dependent on the weather than fishing. Strong winds and big swells don’t just mean a bad day on the water – they can also put the crew in very real danger. Ethan Neville got in touch with an expert to ask some of his lingering questions about marine forecasts.

Weather is one of the great mysteries of human history. What else has such a regular and profound impact on human existence, yet remains so far out of our control?

At first, weather was firmly in the realm of the gods. Our job was simply to keep them happy, and certain kinds of rituals often did the trick. The powers of observation came next – yes, “red sky at night, sailor’s delight; red sky in the morning, sailor’s warning” is somewhat accurate. Now we can make use of powerful computer models, satellites and radars to predict the weather – but that hasn’t solved all our problems, particularly when it comes to marine forecasts which are subject to a range of localised factors.

As fishermen, it is our business to understand what the weather is doing before a trip, so I’ve spent a considerable amount of time trying to get my ahead around how best to read wind forecasts and swell maps. However, I still occasionally find myself leaning back on the helm seat, watching the mess of white water, sharp swells and my mate James’ breakfast flowing out behind the boat, and wondering what the hell happened to the forecast 5-10 knot westerlies. With no answers readily found, I got in touch with Lewis Ferris from MetService and asked him some of my lingering questions about weather prediction.

My first question was simply around wind in general – how is it that this invisible force can be forecast?

“In a very basic sense wind wants to flow from high pressure to low pressure,” Lewis explains. “This is easily witnessed when you blow up a balloon and subsequently let it go. This is known as the pressure gradient force and describes many local wind flows around New Zealand.”

While atmospheric pressure is vital to creating wind, the Coriolis Force – which I definitely won’t explain in detail – also comes into play.

“You may be wondering why the wind circulates clockwise around a low pressure system rather than directly at the low centre? This is due to the Coriolis Force which means winds approximately follow the isobars.” 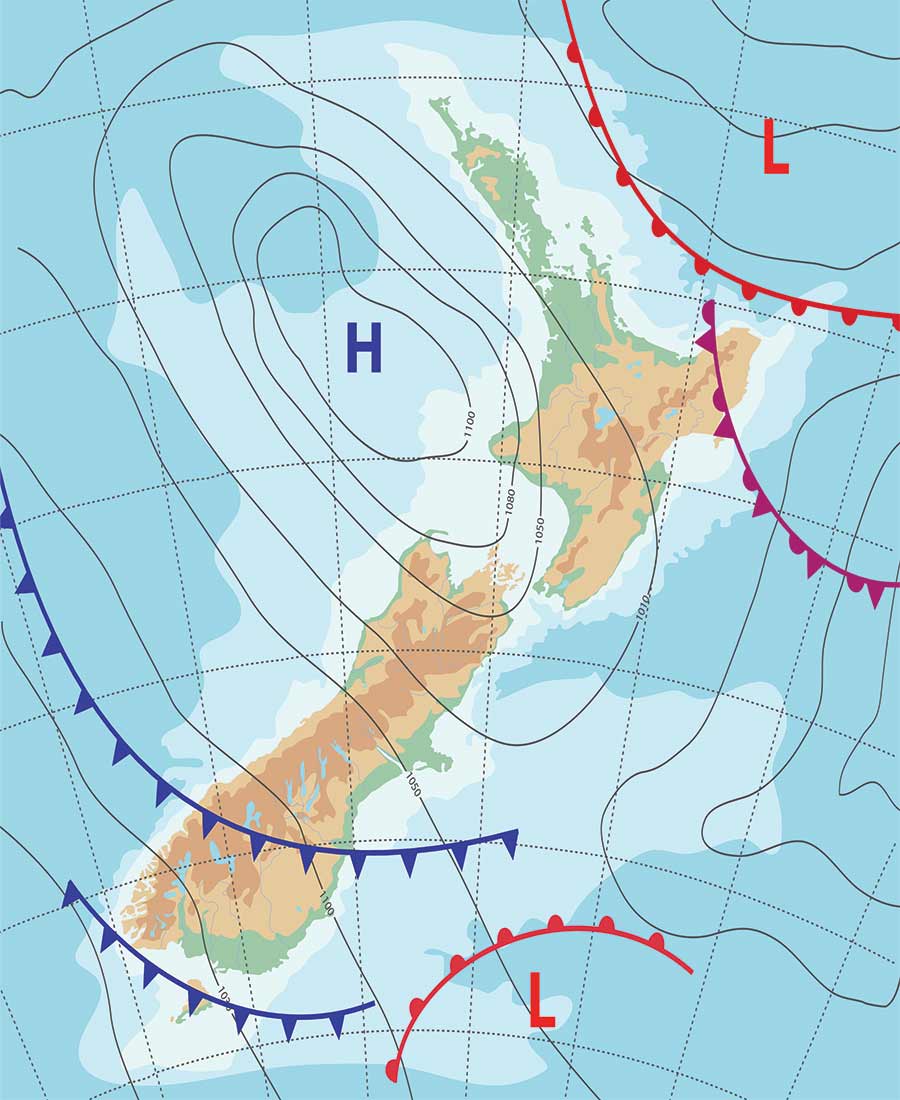 Isobar maps indicate areas of high and low pressure, as well as how intense these systems may be.

If meteorologists can understand these factors, then wind can be modelled with some degree of accuracy. What makes things particularly complicated, however, is the interaction between the winds pressure systems create, and the local topography they interact with.

“Aotearoa has a rather complex topography with far too many localised winds to list here,” Lewis notes, “but a notable one is the Cook Strait funnel where the northerly will accelerate as it is squeezed through the strait. Castlepoint is also known to get a vicious downslope westerly wind which can be notably stronger offshore than at the beach.”

After gaining some understanding of how wind is created, my next point of interest was the many models that popular websites like Predict Wind and Windy use to make their forecasts. Are some models better than others? Or should different models be used in different contexts?

“A number of large weather agencies across the world produce what we call ‘global models’,” Lewis informs me. “These models calculate how the weather is forecast to evolve over time for the entire globe.

“Model to model they will be different for numerous reasons beyond the scope of this article but two big considerations are model resolution and physics.”

The model resolution, Lewis continues, “describes how often the calculations are done spatially and temporally,” while model physics gets into the “nitty gritty of how the model tries to represent the real world. This is anything from deciding what is covering the land (sand, concrete, grassland, etc) to how rainfall is calculated.”

To run the numbers on all of this data, these models make use of the biggest supercomputers in the world, Lewis tells me. The almost silly amount of variables, however, means each model will produce slightly different results.

“In most cases, the best model to follow is that one that is describing ‘now’ as accurately as possible, and not the one that gives you the conditions you want.

“Finding the right model may seem like a daunting task, so this is an excellent reason for using the text forecasts on metservice.com that our meteorologists write. From our standpoint, we can address which model is performing the best and write forecasts that balance the most likely outcome with the one that is having the most impact.”

Now I was getting my head around the basics, I wanted to go straight to the heart of the matter. How accurate, then, are the wind forecasts these models produce?

“Accuracy of forecasts is a hot topic which becomes complex very quickly. If you need to know wind speed to within five knots and direction within 45°, then this is fairly possible on days one and two, but that type of precision becomes less and less possible at longer timeframes. You also have to take into account local effects which are going to account for bigger discrepancies than the precision stated.

“Think to yourself about why forecast precision might deteriorate at longer timeframes,” Lewis continues. “The most important factor is that we cannot measure the atmosphere completely and therefore can’t calculate how it will evolve perfectly. Small errors in the beginning are likely to increase over time (the butterfly effect).”

“How do we combat that?” he asks rhetorically.

“If you were to use a single wind model then you could write an extremely precise forecast, but precision doesn’t equal accuracy. 12.5kt is more precise than 20kt but if the wind was actually 17kt then the 20kt forecast is more accurate. By looking at multiple models and taking an average of them all (weighting them appropriately depending on their perceived accuracy) we create a less precise forecast which will tend to be more accurate than a single model approach when considering longer time frames.”

This made a lot of sense. If you’re still with me, it appears best practice is to check a range of models to generally understand how the wind is behaving, but then make your final decision based on the most local forecast you can find (which typically will be MetService in NZ).

Besides wind, I had a few more concerns about marine forecasts, so didn’t waste this opportunity to fire through a few more questions. The first was about swell and chop – how are these created and how much weight should boaties give to swell forecasts?

“Both swell and chop (sea state) are generated by winds flowing across the surface of the water but swell is considered to have a wave period longer than eight seconds (that is the time elapsed between subsequent peaks at a stationary point). Chop is locally generated waves that exist when the wind is blowing – swell can be generated many kilometres away and persist when there is no wind.

“Longer boats aren’t very affected by the short period chop but will have more issue in long period swell and vice versa.”

We’ve all heard about ‘wind against tide’ (if wind and tide are in opposing directions, then the conditions will undoubtedly be worse), but one thing boaties often forget about is ‘wind against swell’. While ‘chop’ is the product of wind, swell can roll in the opposite direction.

“When the swell and wind are in different directions, you have a ‘confused sea state’ which makes it difficult to tell where the waves are coming from. Big swell and strong winds in any direction make for very dangerous conditions as the interaction of the two different wavelengths creates an ‘interference pattern’ where each subsequent wave may be additive (big) or subtractive (small).”

In short, yes, swell size definitely should be taken into consideration, and us boaties should always check what direction the swell is running.

My final question was about sea breezes. Most fishermen have been caught out by these summer winds at some point, and I was keen to understand how they work.

“Sea breezes are onshore winds which occur when the land becomes significantly warmer than the sea surface temperature,” Lewis explains. “These are most prevalent in the warmer months when the sun is high in the sky and there’s a lack of cloud cover.

“The hot air at the surface rises which creates an area of low pressure, which is then filled by the cooler air over the water. The flow-on effects set up a circulation which can get quite breezy when there’s a large difference between the land/sea temperature; 10-15kt is standard but 20kt isn’t out of the question.

“The perfect recipe is a cloudless summertime afternoon with no broadscale, synoptic wind – these conditions are most likely to arise when we have a big high-pressure system parked over us.”

Putting it into Practice

To sum up, there are a few easy steps boaties can take to prepare for a day on the water.

Leading up to the trip, regularly check a variety of wind and swell forecasts to get a good general idea of the conditions (e.g. MetService, Windy, Predict Wind, SwellMap). Within two to three days out, make a call as to whether it’s safe to head out.

The day prior to the trip, give most of your attention to local forecasts as they can compare the various global models with real-time observations when making their predictions.

The interaction between wind, swell and tide massively influences boating conditions. If any two of these are in opposing directions, particularly wind against tide, then know that even light winds could produce potentially dangerous conditions.

There’s always a degree of error with forecasts, so make your final call when you’re at the launch destination. If there’s an okay forecast but waves are breaking over the ramp, it may pay to give it a miss.

In summer, be prepared for sea breezes in the afternoon, even if they’re not forecast.

There is more to be said about bar crossings and specific places where currents are particularly strong, so if you’re travelling to a new area, make sure to speak to someone at the tackle store for some local knowledge.