We raised and played a lot of blues in those early days fishing the tropical South Pacific, but our success was well below expectations. We had to concede the simple fact that blues are the Lamborghini of the marlin world and that meant we needed to adapt, not just our choice of lures, but also the terminal tackle and how we set our lure spread.

Every boat has its own dynamics, which relate to its hull design, whether it’s running a single engine or twins, and in particular, a unique set of stern pressure waves. The latter are the starting point when placing your lures for maximum effectiveness.

V or W lure spreads are the norm, so you just need to work out what suits your boat.

On Blue Marlin Magic we deploy a W-Pattern but often, especially when solo fishing or when the sea conditions are rough, we only run three lures. It makes very little difference in our ability to raise fish, so there is no magic number of lures that guarantees success. Having also fished in smaller trailer boats, I would rather run three lures and sacrifice a fourth or fifth option for a teaser or dredge. It reduces cockpit chaos and is more efficient when clearing gear on hook-up, especially if you only have two people on board or are fishing solo.

From many years of observation, blue marlin attack a lure spread from depth and at a high impact speed. In many cases you never see the approach, just a big hole in the water.

In the waters surrounding Vava’u the initial blue approach prior to the strike has a predictable outcome. The blues most often slide into the spread from depth and strike the inside of the pattern (either the port or starboard lures) and then race out into clear water. You can take advantage of this behavioural trait by slightly offsetting your upright hook by up to 10 degrees facing into the centre of the spread.

You improve your chances of the hook point embedding itself on the initial strike and a subsequent, clean mouth hook-up.

So what lures attract the most bites from blues?

Before I address this, you really need to get a handle on your trolling speed, as this has a lot to do with the choice of lure. Your ideal speed will be a factor of your boat’s hull design, engine power, running cost considerations and sea conditions, so from day to day you can be are faced with making different lure choices.

Average trolling speeds range from 6.5 knots up to 9 knots and for blue marlin we troll at around 8.3 knots for two reasons:

1. We want the lures working hard – the splashier the better – not tumbling but throwing a lot of water with maximum action.

2. Initial strike to hook-up rates are higher – a factor of the speed of the chase which usually induces an aggressive bite.

Within any lure spread, not all lures work the same in every position, so again, it’s time on the water to work out where different lure-head designs work best and what positions produce the most bites. Put this intelligence together with average fish-size information. 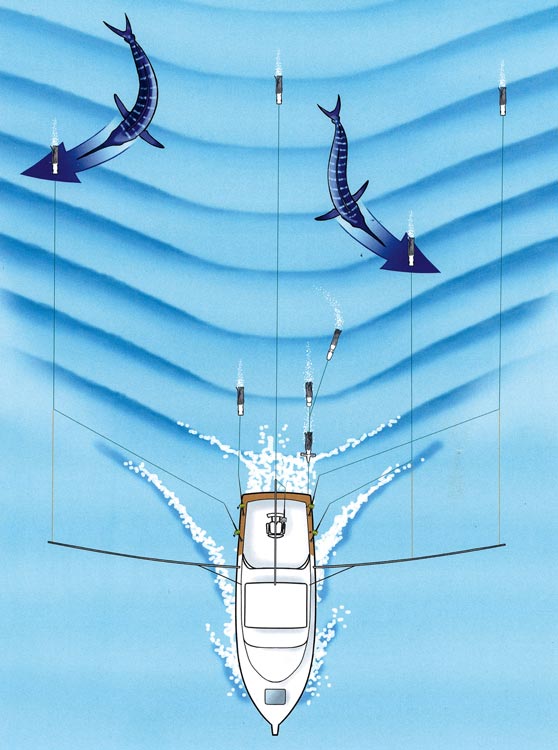 With reference to a boat’s set of stern waves, you have the option of setting the spread anywhere from short to long and that often depends on the sea conditions and what you are targeting.

With balmy, flat-calm waters, we often run a longer length spread and troll a bit faster to get a splashier action. With a run of smaller fish in the 70-90kg range, where only the shotgun is getting nailed, a longer spread can induce additional bites on the ‘riggers.

With very rough seas we often shorten the spread length for better lure control. If yellowfin are about, we run our shotgun out an additional wave.

Once you have a handle on the spread dynamics, you can specifically place lures in the right position and on the right line-class tackle. These stats are invaluable, and they also tell you a lot about blue marlin behaviour.

On the shotgun/centre ‘rigger position we use, on average, a smaller lure (9-inch), most often a lure design that has a long tubeor bullet-shaped head, slightly concave, or one with a slight angle face. Meridian Demon, Bonze Merlin or Angel, RG Smoking Bodgy and Moldcraft Wide Range are typical examples.

These lures need to be splashy but have the ability to hold well in the water in different sea conditions. The shotgun often performs another valuable service in the spread. When a blue strikes the inner pattern but doesn’t hook-up, it often takes the shotgun, especially if you make a dramatic turn.

The shotgun position accounts for 31% of all our blues, but they are the smallest average size.

In the two long-‘rigger positions I most typically run angle-faced designs – anything from 12 to 15-inch. Typical lures would be Bonze Scorpion, ‘Here for the Party’ or Ballistic; Black Bart 1656, Bart Hawaiian Breakfast, Bart Kona Classic tube; Moldcraft Bobby Brown Senior; Red Gill RG2, RG4, RG8; and a flat-face such as Fathom Pepal Grande.

This group of lures has the ability to create a lot of surface splash and action and holds very well in varied sea conditions. Most typically we run a single 10/0 or 11/0 hook, and with the exception of Bobby Brown, my preference is super-stiff single-hook rigs.

The port long ‘rigger position accounts for 28% and starboard 24% and the fish are typically in the 120kg-200kg size. 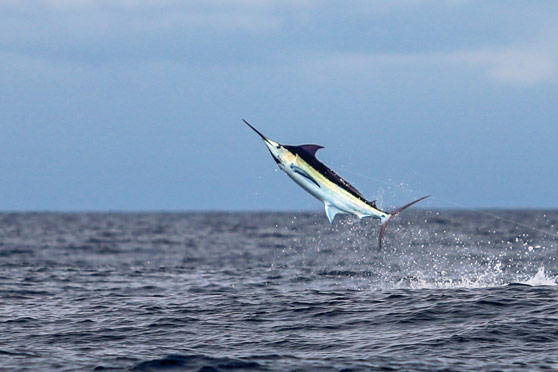 Our port long-flat lure is usually a cup-face head design such as Bonze Hercules or Illander; Bart Prowler; RG 8 Special; or Fathom Pepal Grande. This position accounts for 13% of blues and records the second heaviest average size we catch.

Our short corner accounts for 10% of blues and lures run there include Bart Braziliano; Meridian XOS Spectre; Bonze Spellbound; Grimmel and Marlin Magic Ruckus, and Red Gill 8 Nathan Special. They are typically bigger lures, featuring very active smoke trails and we run minimum 11/0 up to 14/0 single-hook rigs and always run them on 60kg tackle.

This position accounts for the heaviest average fish we catch, typically between 200kg to 350kg-plus.

It is interesting to note that the port side lures account for 7% more fish than the starboard side – and we run a teaser off the port transom, clear evidence, confirmed over many years, that the teaser creates an additional bite zone favouring the port-side spread.

You may have worked out what lures work best in which positions within the spread, but part of the process also means determining where in the wave face individual lures hold best.

Some lures hold well just below the crest, others are better smack in the middle while others work best right at the bottom of the wave. Much depends on trolling speed, head design and sea conditions.

We have run a few very radical lures over the years – lures that race around like a mad, wounded bull. They certainly raise a lot of fish, but getting a successful hook-up is very much hit and miss. It goes to show just how important it is to have a well-balanced lure and the fine-tuning aspect can make all the difference in converting strikes to hook-ups and caught fish.

With the stamina and speed of blues, they can tear out hooks with ease, so our goal has always been to find a rig that secures a vast majority of clean mouth hook-ups. Currently we are averaging around 85% of our hook-ups being mouthhooked marlin, and that simply means converting more strikes to caught fish.

Super-stiff single-hook rigs work for us and are our first choice when targeting blues. Stiff rigs also work well for striped marlin, as they can take a lure from behind as well as displaying the same blue marlin behaviour of a sideways sweep and bite.

For striped marlin we use 9/0 to 10/0 single-hook stiff-rigs and the hook-up rate is 80%-plus – pretty much the same stats as for blue marlin (see photo on previous page).

I am a firm believer that the head design is more important than the skirt colour per se, but like most fisherman, our goal is to get both right at the same time. When there are lots of skipjack tuna around, black-over-purple or purple combinations simply get more action.

With yellowfin around, or big schools of mahimahi, fruit salad combinations do equally well. And when billfish are feeding on squid, black-over-orange, red or brown attract the most attention.

Fine-tuning lure performance takes time and skirt length is part of the equation. With a new lure that we haven’t run before, we avoid the temptation to trim the skirt in the first instance. We rig the lure and give it a good run to test its overall balance. The choice of hook-rig and hook size has a big impact on lure performance and often a simple hook-size change or a skirt trim does the trick.

In blue country, a balanced, boat-specific lure spread has a much better chance of raising and catching fish. There is no ‘only one way’ of doing it, nor is there a magic number of lures to pull. It all comes down to preparation, observation, trial and error – and mastering the craft of lure fishing. 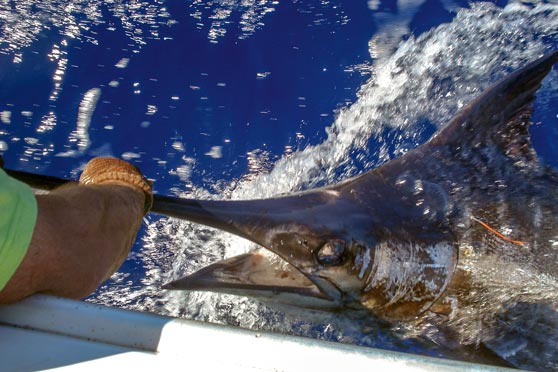 Blues are tough adversaries, with incredible stamina and speed. They will test the best of gear, the angler and the crew – game on! 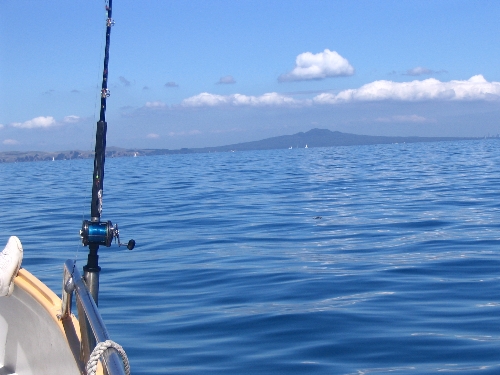