Netting or gaffing your catch (Part 3)

A large, strong, fixed-head gaff fitted with decent grips and/or possibly a spade-type handle in strong, willing and experienced hands can land some very big fish (that’s how some very big salt-fly IGFA records are landed), but when tackling very large, active game fish sometimes even this combination is not enough. It’s time to get the flying gaff out – a gaff that plants the hook and then separates, leaving the fish connected to the hook and a length of strong rope that in turn is attached to a very sturdy part of the boat. 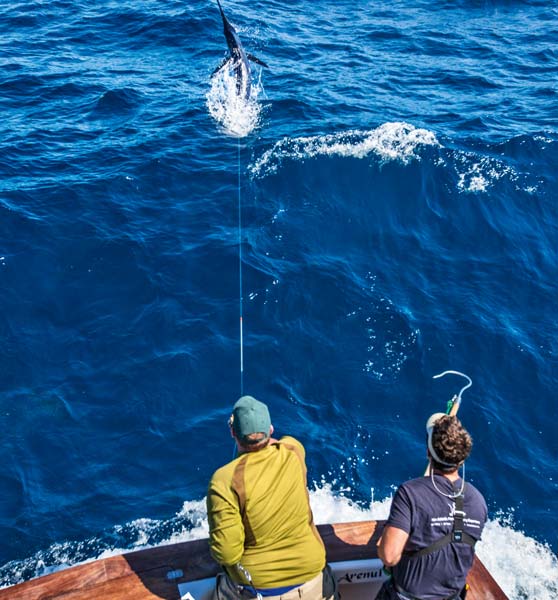 What makes a good flying gaff?

Gaff-hook size and shape: The size of the fish determines gaff-hook size selection, which is why well-equipped sport-fishing boats tend to have at least two sizes available to suit the circumstances. For example, a fish that’s too small for the gaff-hook selected makes gaffing very difficult, a lack of body mass sometimes causing the heavy-duty hook point to either skid off or to set poorly.

On the other hand, a gaff hook that’s too small won’t grab enough flesh and may allow strong fish to rip off – and there’s always a danger of the hook straightening out. Some gaffs come with two or three different sized hooks for quick and easy change-outs.

The shape of the gaff-hook is always a debatable topic, but I like a slightly – and I stress slightly – outward-angling hook that is easy to plant and grabs a decent bite of meat.

Most gaff hooks are made from stainless steel, due to its corrosion resistance and strength properties (especially when forged), with the heaviest-duty models often fitted with extra reinforcing around the hook bend. A triangular hook point is popular, because it’s easy to sharpen.

Some hooks also have a barb to better hold fish, but they can be harder to set – a fold-down/flip-up barb provides the best of both worlds. 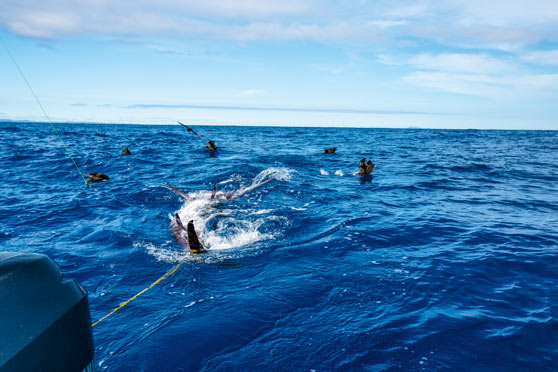 Flying-gaff pole and fittings: IGFA regulations stipulate that gaffs must not exceed 2.44 metres in overall length, but overly long gaff poles can be hard to wield effectively anyway. Most gaff poles are made from aluminium or fibreglass and around two metres in length, offering a combination of lightness and strength. And if the pole floats, so much the better, as crazy things happen in the heat of battle!

The gaff’s hook-release mechanism is important. It should prevent the hook ‘falling off’ at the worst possible time but release cleanly when required to. A wide range of clever ideas address this issue with varying degrees of success.

The gaff pole is often fitted with a comfy grip or two, along with a simple means by which the gaff rope is temporarily held in place – typically by adhesive tape or a thick rubber band (or both) and the gaffer’s hand. When the hook is placed in the fish, the fish’s weight and momentum cause the rope and hook to separate from the pole.

Rope: Typically a soft but strong 5/8" diameter nylon rope spliced directly to the hook eye. IGFA regulations allow a maximum combined total rope and hook length of 7.625m (25 feet), although in practical terms, the rope need only be as long as the farthest distance a crew member can reach with the gaff from its point of attachment. 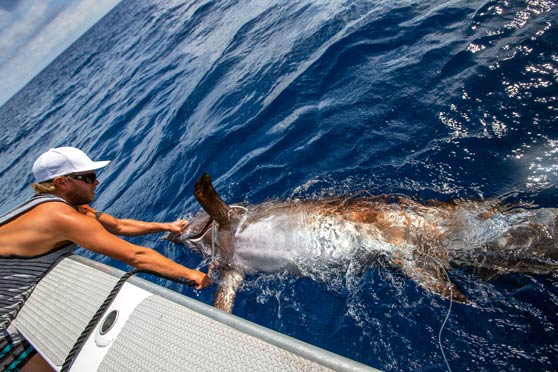 Planning well is an essential part of fishing. Gary Kemsley takes us through his planning prcoess, considering wind, water clarity and rigs,... more >

Caring for your Catch and Filleting Snapper April 2020

Mark Kitteridge discusses how to best care for and process your catch, and provides a step by step guide on how to fillet snapper.... more > First time ever fishing and got the big one - Kawhia