Mechancal jigging from a kayak

This stealth ability certainly allows lures to be presented in a more natural way, making it easier to achieve the deception that results in a strike from a fish.

One lure-type that has proven to be an extremely effective option is the jig. My personal addiction to them started back in 2007. The long, heavier versions used to target yellowtail kingfish were starting to make an impact with anglers. At the time little was known about them in the world of kayak fishing, apart from a few who used them to speed-jig, but it was the technique of mechanical jigging that was proving to be the most effective.

Mechanical jigging was written off as being much too difficult to achieve from a kayak because of the dynamics of working the jigs, especially from a seated position. Initial reactions from anglers who had experience with mechanical jigging left me feeling disillusioned.

In those early times we were limited to larger and heavier jigs, and the jigging was based around deeper water, making the degree of difficulty higher. Anyone who has fished with bigger jigs knows how hard it can be to use them – they require plenty of upper body strength to work them properly.

The problem of having to stand up to use the mechanical jigging technique proved the biggest obstacle for kayak fishers, but it was eventually overcome by changes in technique and adopting lighter jigs. My first attempt at mechanical jigging from the kayak was at Great Barrier Island where I nailed a decent kingfish. From there the addiction has grown until jigging has become one of my mainstream methods. My fondness for this technique has been compounded by my preference for targeting yellowtail kingfish, a formidable predator to manage from a kayak.

One thing I have learnt over the years is to be prepared for any scenario that may arise during my time on the water. Carrying specific rod-reel setups is key for this and with kingfish in mind, carrying a mechanical jig set has paid off. On any given kayak-fishing expedition, mechanical jigging is my primary method to lure kingfish and has seen plenty of fish caught and released.

But success is not just a matter of putting a jig in the water. Some kayak anglers initially have limited success jigging and as a result don’t persevere long enough to gain the knowledge. Unsuitable equipment can compound the issue, but when everything comes together, long periods of mechanical jigging from a seated position in a kayak are easily achievable. And once this method brings success, it opens a whole new way of catching fish – and after jigging for more than 10 years I can confirm that kingfish are not the only species that likes to eat jigs.

Selecting the right rod and reel for mechanical jigging from the kayak is crucial. Some widely available combos are okay for the job, especially if you are on a limited budget, but to get the maximum return for the effort, matching the gear to your requirements is the best way to go.

Obviously, the tackle will need to be capable of handling big fish like kingfish, but should also offer the right characteristics to properly work the jig. I find that rods with lengths from five-foot, three-inches (1.6m) to six foot (1.83m) are ideal for the kayak, with the longer models tending to have softer tip sections.

Jigging from a kayak requires a forgiving rod action because of the angler’s seated position. The softer tip-section compensates for the seated position by providing extra flex to add additional action to the jig. A tip section that is too stiff won’t move the jig erratically enough, and the line is also more likely to wrap around the rod tip.

Also consider the rod’s line and lureweight ratings. With a kayak, lines rated at PE 3 or 5 (breaking strains of 15 or 24kg) are more than adequate. As for jig weights: in most of the areas you are likely to fish the depth might vary from as little as 20m up to maybe 100m deep. You’ll need a selection of jigs with different weights to cover all the bases. So selecting a rod that offers a range of weight options from 150 to 300 grams with a line rating of PE 3 to 5 should cover most applications. Another thing to consider is the guide configuration. Spiral-wrap (acid-wrap) designs offer greater stability and are less likely to twist when under load. This is not always the case, though, with some high-quality rod builds providing nice, stable actions without the spiral wrap configuration.

Matching the rod with a suitable reel leaves the option of either spinning or overhead designs. When seated in a kayak the overhead type is much easier to use because a spinning reel hangs under the rod and can knock against your legs during the mechanical jigging action.

One of the awesome things about overhead reel designs these days is their small size, making them perfect for the kayak. An overhead reel suitable for jig use has a narrower spool, which makes it lighter. It should be capable of holding around 300m of line. Silky-smooth drag systems are very important, with lever systems the best choice, giving you instant control should the drag require adjustment.

A reel that offers a decent retrieve speed is also better for mechanical jigging, with 90cm or more of line per crank of the handle ideal for the purpose. Retrieve speed not only comes down to spool size and gearing, but also to the handle length. Lower retrieve rates can be useful in some applications (such as deep-water bait fishing) and when actually fighting powerful fish, so consider this as well. As a general guide, higher speed retrieves suit faster jigging styles while slower retrieves are better for slow movements.

The next consideration is line. Braid is the best choice, offering benefits like low diameter, which means less line resistance in the water, and higher line capacities on reels. Zero stretch allows the angler to better keep in contact with the jig. As mentioned with rod selection, breaking strains of around 50 pounds (24kg or PE5) are ideal allowing for drag pressures up to 25 pounds (12kg) to be exerted.

For leader material, use either mono or fluorocarbon from 80 to 100 pounds breaking strain (37-45kg) with fluorocarbon offering advantages like greater abrasion resistance and being less visible in the water.

One other item that has proven worthwhile for jigging is a ring and grommet connection, offering greater protection to the leader where it attaches to the jig. It also provides a solid connection to the assist cord and hook.

Other pieces of kit to consider are split-ring pliers to quickly change jigs, a PR bobbin and braid scissors. Using a jig strap to secure the jig/hook rig to the rod will prevent damage to equipment from free-swinging jigs.

Fish finders are also an essential part of the mechanical jigging kit, allowing you to drop the jig right on the action.

Jigs are available in a number of designs, sizes and weights to suit various applications. Choosing the right one for the job will not only come down to the water depth, but also the target species.

Jig actions may be broken into three categories. The first type falls and rises through the water column in a vertical way. These jigs have a thinner profile that either spreads the weight evenly over the entire jig area or concentrates it near the base so it drops faster.

The second type has more width and is weighted to one side, allowing the jig to slide down on a slight angle as it falls vertically. The third type of jig has a much wider body to give it a fluttery action as it sinks and rises. There are intermediate actions as well.

Jig colour should also be considered – and it’s always a good idea to cover the bases with a variety of options. A good jig will have reflective film and lumo paint, which will make them easier for fish to see in deeper water. Some jigs come already rigged with an assist hook and split ring, however my preference is to use the ringgrommet setup and make my own assist rigs.

As a guide, the assist rig should be around one-third of the jig length and is made using Kevlar cord tied to number ten to thirteen hooks and then covered with heat shrink material (optional). The jig itself is connected to the assist rig and grommet via a split ring, so it’s easy to change over.

Knots and getting set up

Jigging requires good knots able to handle the pressure exerted by large, predatory fish and some of them can be challenging to tie on the kayak.

Because the angler needs to be able to access the jig on the end of the line, knots joining the main line to leader need to have a small profile so they run easily through the guides. There is no doubt the PR knot is the best one for the job, providing the strongest connection – even stronger over the second option, the FG. 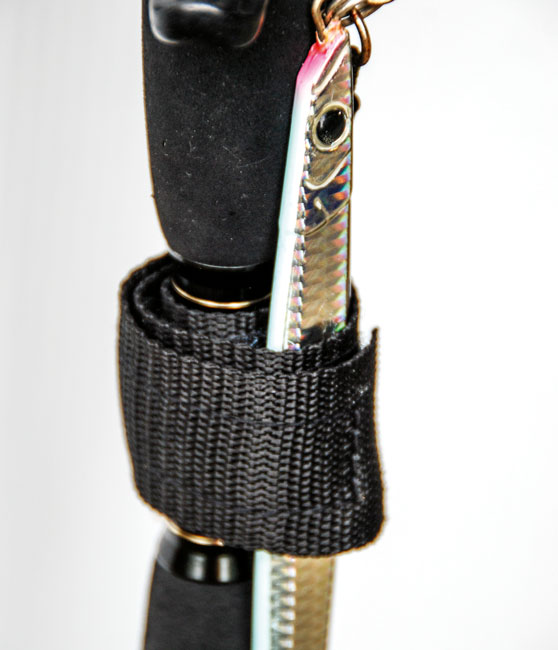 The PR requires a bobbin, which is harder to manage when sitting in the kayak, although is not impossible to achieve, depending on the conditions. Choppy seas and wind make it difficult to tie, so that’s when I use the FG knot.

Use around 3-4m of leader material and attach the leader to the terminal tackle with a chain knot. This requires back-to-back half-hitches up the line, finishing with a final hitch that wraps four times or more and will act as a shock absorber against the powerful strikes of large fish.

Now the setup is complete. 24lb kingi from the yak! - North of Kerikeri