Long-line fishing with an electric kontiki

Beach long-line fishing has become extremely popular in recent years with the proliferation of electric torpedo fishing systems. With the ability to tow a beach long-line with 25 baited hooks kilometres out to sea, electric kontikis are an effective way to put high quality seafood on the table while enjoying a social family outing at the beach. John Eichelsheim takes a closer look…

In 1947 Norwegian explorer Thor Heyerdahl, seeking to prove that Polynesia was settled by voyagers from South America, crossed the Pacific Ocean on a hand-built balsa raft named Kon-Tiki. By the early 1950s various raft-like contraptions used by Kiwi beach fishers to tow beach long-lines out to sea began to be called ‘kontikis’.

Kontikis had become more mainstream by the 1960s, with instructions for their construction and operation available in outdoor magazines and books like Ray Doogue’s seminal Hook, Line and Sinker, which is where I saw my first drawing of a kontiki. It had a simple square sail on a folding mast held upright with a backstay.

Kontiki rafts often comprised two or more hulls/pontoons made from buoyant material, usually timber, but occasionally glass bottles were used. Some rafts were given a rudimentary boat-like shape to improve their sailing performance. The backstay was attached to the raft using a connection that would release the mast after a certain amount of time. The most common connection was a boiled sweet, often a barley sugar or Lifesaver, which would gradually dissolve in water, eventually severing the connection between the backstay and the raft, causing the mast to fall so the raft was easier to retrieve. Unlike modern electric kontikis, most sail-powered models didn’t tow the long-line out to sea with the baited traces already clipped on. Instead, to reduce drag and to ensure the slow-moving kontiki quickly got clear of the surf zone, the baited section of line was usually carried on the raft itself.

Retrieving the kontiki was a physical affair, with people taking turns to grip the line and walk up the beach with it. Long-lines were usually stored on drums of some sort, some of which could be used to winch the line back to shore.

Such ingenious kontikis worked well enough when the conditions were conducive to their deployment. Central to this was a wind blowing directly offshore; the sea conditions had to be good too, because the rafts were vulnerable to damage from breaking waves.

The advent of motorised kontikis a few years ago changed beach long-line fishing forever. Modern torpedo-style electric kontikis are much better at managing adverse surf and sea conditions, and don’t require an offshore breeze to operate. In optimum conditions some torpedoes are able to tow long-lines more than two kilometres offshore.

GT Kontiki systems feature an electronic point-and-go steering system that follows a pre-programmed magnetic bearing. Dubbed an ‘autopilot’ by the company, it’s a reliable non-GPS navigation system that keeps the torpedo tracking on a pre-set heading.

The user-friendly control-panel displays are easy to read, with ultra-bright LED indicators for battery life, bearing-setting confirmation, speed setting and motor-run time. This sealed unit is programmed with a handy magnetic stylus, housed in aluminium, and has a shroud to help prevent it picking up unwanted objects on the prop.

For safety reasons, the GT Kontiki motor will not start until the user has selected a bearing and the motor-run time and speed have been set and locked.

The GT Kontiki uses a high-thrust 22.65kg/50lb motor, and its bright-orange hull has an unusual ‘twin-fin’ tail section that aids stability in the water and allows the torpedo to sit upright on the beach. The motor features a specially designed hydro-dynamic nose for better performance in rough conditions, three-speed operation, soft start, and anti-stall overload protection.

The GT Kontiki is supplied with four GTK 9Ah 12V gel batteries, four for-stage smart chargers, and a powerboard. The torpedo can be operated with three or four batteries, giving a typical run time of 22-25 minutes and 27-30 minutes respectively. Maximum distance offshore is 2km, but 1.2km to 1.6km are more typical.

Like other electric kontiki suppliers, GT Kontiki offers whole fishing systems that include 2000m of line, clips, hooks, traces, trace boards, weights and other terminal-tackle accessories. However, the maintenance-free GT Kontiki electric winch comes standard. It’s a three-speed unit with a pulse button for better retrieve control, and a two-button remote control so operators can stop, start or pulse the winch from the water’s edge – handy when retrieving the line and unhooking fish, solo.

Wanganui company Kentiki offers torpedo models in long and short configurations with 13.6kg/30lb or 21kg/46lb of thrust. The short model is lighter and fits easily into most car boots, but longer models are faster and perform better in rough conditions. The high-thrust model can cope with strong currents and high surf.

All Kentiki long-line haulers are equipped with a flag, strobe light, two or three batteries, a battery charger, steering chains, sinkers, lid spanner, manual and instructional DVD. They feature either simple, well-proven manual self-steering (pre-set on the beach) or the company’s new auto-navigation technology, which steers the torpedo along a selected compass bearing.

In addition to electric long-line haulers, Kentiki also offers a light but strong electric winch with a marine-grade aluminium drum, a 14 amp-hour battery, and a 150-watt electric motor. It can be supplied complete with long-line, including 120m of leader line, 200m of stoppered section (100 stoppers) and 1680m of 1.6mm mono.

Kentiki can also supply wooden long-line hook boxes with 25 Sea Harvester clips, traces and hooks. When closed, the box prevents UV damage to traces and keeps children, seagulls and other animals at bay.

Predator Kontiki bills itself as ‘New Zealand’s favourite kontiki’. The shark-shaped electric kontiki comes in three models and three thrust options: 13.6kg/30lb, 20kg/44lb or 24.5kg/54lb. Some versions are equipped with Auto-Nav, Predator’s programmable compass-based navigation system, which steers the torpedo along a pre-determined bearing, and all units have an offset tow-point to counter propeller torque.

Predator Kontiki’s shark-shaped body and central battery position reportedly allow the Predator to punch through waves, rather than ride over them, making it easier to deploy through rough surf. Predator uses only saltwater electric motors, and its engineers have developed their own compass for Auto-Nav models, since many off-the-shelf compass systems become unreliable when exposed to iron-rich west coast black sand. Predator’s unique teardrop-shaped, oversized propeller-guard houses a larger propeller for more thrust, and the hull’s streamlined shape is easily driven through the water.

Current models offer a range of up to 2.3km, but in future Predator plans to fit Lithium batteries to further extend maximum operating time and range. Safety features include: power consumption monitors; electronics and battery protection; and an automatic motor shut-off and re-start sequence (three times) if the propeller becomes fouled.

Accessories include a compact, low-maintenance variable-speed electric winch with auto cut-out fuse. Able to pull up to 60kg, it can be ordered loaded with 2000m of line, including the leader and stopper line (75 stoppers). It comes with a safety handle for manual winding, a bait tray on the top, a sand-anchor bar, adjustable knob, and two 12V 9Ah batteries.

Predator also offers aluminium trace boards, polyethylene accessory cases, and a variety of accessories and spare parts, including batteries and chargers. Flags and strobe lights are sold as add-ons.

SeaDart Kontiki produces one model with a 13.6kg/30lb thrust Mercury electric motor, manual pre-set steering, and an ultra-stable, boat-shaped polyethylene hull that the company claims gives superior performance through the surf. Other external parts are high-grade stainless steel, and the boat is sold with a flag, strobe light 14Ah battery pack and CTEK battery charger as part of the package.

SeaDart offers packages with the kontiki, the options including a battery pack, charger, strobe light and flag, along with a simple hand reel, line, crimp section, race board and traces with hooks (26).

Alternatively, customers can opt for the electric-winch package deal, which comes with the kontiki, 1500m of line and fishing accessories as above, but with a SeaDart electric winch and battery instead of a hand winch.

SeaDart variable-speed electric winches feature aluminium and stainless steel components, an 180W motor, battery, and a removable stainless-steel post to anchor it in the sand.

Accessories include: trace boards (with and without traces); battery chargers; 7Ah and 12Ah batteries; replacement line; berley mincers; and gaffs.

Seahorse recommends using its light and easily managed two-blade 30lb thrust models in calmer conditions, while two-speed high-thrust models with their three-bladed propeller are better suited to more rugged sea conditions and whenever maximum distance and pulling power are important. Hulls are low in buoyancy, so dive through the waves, and their length provides excellent directional stability, without the need for drag-producing fins or other appendages.

Steering is controlled by the forward-mounted Seahorse rudder, which the company has designed specifically for efficiency and control, even in aerated or turbulent water, and the tow point is offset to compensate for propeller torque.

The well-proven, magnet-activated Seahorse Control Unit manages and protects the battery, as well as the GPS system where fitted. The engine run timer is controlled from here as well, while built-in safety systems include stall protection and a motor stop and re-start sequence (three times) should the propeller become fouled.

Seahorse GPS Autopilot Control System operates independently of the motor-control unit. It calculates the course to travel and operates the rudder to allow the torpedo to follow that course. The control parameters enable the Seahorse to fight its way out through the surf and shoreline rips before working back onto the course to ensure maximum distance and performance.

Seahorse kontikis are sold as complete packages that include a variety of fishing and other accessories, which may include line, traces, trace boards, lights, flags, manual or electric winches, a selection of batteries and chargers, GPS guidance or manual self-steer navigation, beach caddy and trolley options, with some models featuring an electric motor.

Bulletfishing manufacture both autopilot and conventional steering kontiki models that use a magnetic compass bearing to steer a pre-set course, plus a kitset ‘Stealth’ model you can assemble yourself. They also supply electric winches, trace boards and a variety of other torpedo fishing accessories.

Navigation is unaffected by magnetic iron sand or GPS signal loss (it doesn’t use GPS) and the rudder is precisely controlled by the unit’s electronics. The twin-bladed rudder is located between the engine and the hull, where it’s protected from damage and fouling.

To operate, point the kontiki in the desired direction, apply the magnet over ‘select’ on the timer display, and it will lock onto a bearing within seconds. Set the timer distance function at the water’s edge, use the magnet to start the motor and launch.

The Stealth kitset kontiki is a simpler, lighter unit with a different hull design, a strobe light and flag. It has a self-steering system with an adjustable tow point aft to compensate for wind and current. It utilises the same magnetic timer control as the C46A. Easy to assemble, it also utilises three 12V batteries.

Bulletfishing supplies 12V electric drum winches with various options, including multi-speed, soft start and intelligent load control. They have a capacity of over 2500m of 1.8mm 300lb monofilament. The winch chassis is made from marine grade aluminium, there’s a brake to prevent overruns, and neutral for free-spool. Options include batteries and line. Trace racks hold 26 traces and come with 40lb mono trace, #18 recurve hooks and a handy fish measure. 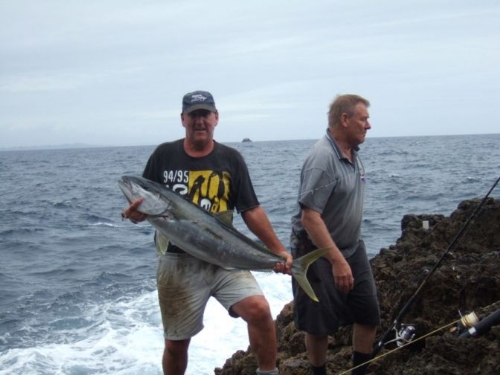 35lb of muscle returned to the sea - Cape Brett