Lefty's Loop Knot And How To Tie It

Non Slip Loop knot, Lefty Kreh Loop knot – whatever you call this knot, it’s versatile, relatively strong and easy to tie, and is a go-to for Mark Kitteridge.

The creator of this knot, Lefty Kreh, came up with it while looking for ways to retain maximum movement in saltwater flies, an aspect of sport-fishing he’s justifiably famous for worldwide.

I adopted this knot soon after getting into soft-plastic fishing. That in itself was quite a feat as it replaced the Uni knot, a knot I still believe is the most important knot of all to learn, due to its impressive breaking strain and ability to be tied in lines of all thicknesses. However, I could see the Loop knot potentially offered significant and unique advantages, and I’ve been a convert ever since, despite its minor drawbacks (for example: it took me quite a while to work out how to make the loop nice and compact and the base of the loop can wear out over tough sessions – and none of this was helped by the fact that I’ve been tying this knot ‘wrong’ all these years!).

The first hiccup was eventually solved by working the overhand loop down close to the lure’s attachment point, then making the overhand loop as small as practically possible. However, the fact I thought the trace tag-end had to be fed in between the overhand loop’s twist, rather than simply into the open loop, made the process more complicated that it should have been. That said, the knot’s performed wonderfully well when tied this way, so I’m reluctant to do it ‘correctly’ now! (I have also noted that most other versions shown on the internet involve five rotations, not three, but again I haven’t had any problems.)

While a knot-testing machine might change my mind, at this stage the system’s working perfectly. For example, I can’t recall the Loop knot breaking while fighting even the biggest of fish. When snagged and the acid really goes on, however, the 20lb trace typically breaks at the Loop knot rather than at the comparatively fiddly FG knot. A replacement lead-head is simply tied on rather than a whole new leader.

I’ve also discovered other uses for the Loop knot when deploying other fishing methods. For example, all metal jigs fitted with assist rigs benefit when a Loop knot is tied to the rig’s solid ring. This allows the lure’s assist rig to lift and drop freely in response to the lure’s movements, and also means the assist hook(s) get sucked into hooking position when engulfed by ‘vacuum-type’ feeders such as kingfish, kahawai and tuna. A Uni or Clinch knot, on the other hand, can see the assist rig fixed and sticking out at weird angles from the lure, making hooking less effective and possibly even affecting the lure’s overall action.

The Loop knot is also a good candidate if using the latest compact but strong clips. (I often use Mustad Fastachs when there’s a likelihood my jigs, stick-baits or poppers will need to be changed, as it’s almost impossible for the fish to swallow these lure types and come into contact with the clip.) Although these clip-swivels are amazingly strong, however, the wire used in the connecting rings/wire can be too thin, causing the clip or swivel to bite into the trace material when it’s placed under severe and/or prolonged pressure. A Loop knot prevents the trace from being tightly compacted, held and crushed around the clip or swivel’s thin wire.

There are disadvantages to the Loop knot though. When starting out, many people end up with Loop knots that are way too big. In the early days I regularly wound my soft-bait in to find the lead-head being ‘strangled’ by the loop – something that also hobbled the lure’s action and rarely attracted bites. The key, as suggested earlier, is to keep the overhand loop reasonably small and close to the lure’s attachment point prior to pulling the knot up tight.

The loop can also become worn out when stressed by excessive weight, which tends to occur when lifting good-sized fish on board using just the trace. Instead, I recommend leaning over and grabbing the jig-head if you can, turning it into a tiny lip gaff to lift the fish on board with – but be sure to grip it at an angle that keeps your fingers and thumb clear of the crushing teeth. Otherwise, place a landing net under them.

Finally, corroding hook and lure eyelets can become rough, causing the leader to chafe through quite quickly when placed under tension, so regularly check the loop’s base. Otherwise, replace it every 15-20 fish or following a particularly tough battle.

i) Form an overhand loop in the trace.

If the loop remains positioned too far up the trace, a very big loop will result, so use your thumb and forefinger to push and ‘roll’ the loop along the trace so it’s closer to the lead-head, before rotating the tag-end around the trace-line three times, producing six twists.

Holding the lure in one hand and the trace in the other, tighten the tag-end a little with your teeth, before letting it go and slowly pulling the knot up with your hands. You may need to again pull on the tag-end with your teeth while pushing down on the knot with your fingertips to make it snug down properly and be more compact. It takes a bit of practice to get the loop nice and small. 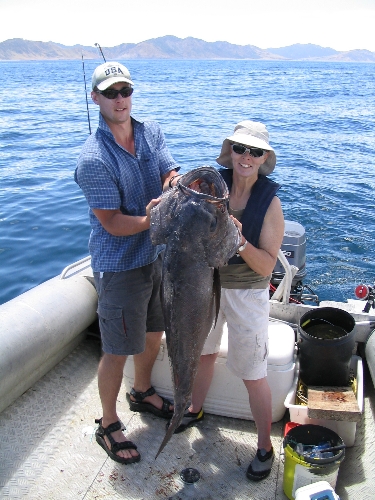