The new ‘kingfish on the flats’ fishing season of 2020/2021 is all set to upload and explode over a number of different coastal communities dotted up and down New Zealand. Craig says he is expecting an influx in tourist and domestic anglers as more people latch onto this great form of sportfishing…

While it is great to see people giving flat fishing for kingfish a shot, it will add up to one thing – pressure. In light of this, many will be hunting out new locations to try. It is a good time then to review what really makes a good kingfish flat tick. 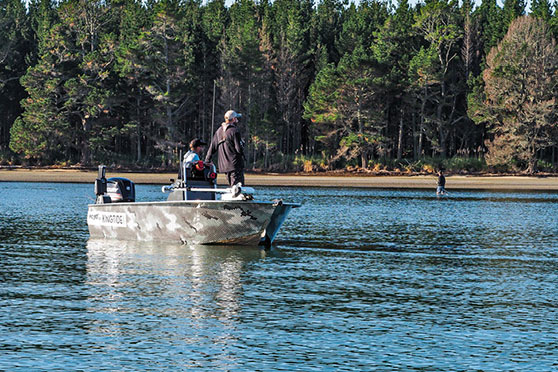 The most popular flats in New Zealand are going to get busy this summer. It pays to understand what makes a good flat tick and go out and find your own.

(1) Flats kingfish are not everywhere – this is the first thing to keep in mind. Just because a tidal flat you’ve discovered in some pretty part of northern New Zealand looks like a perfect kingfish flat, doesn’t mean it will be. There are certain specific physical traits that work together to make kingfish flats what they are. I know this only too well because most of the Bay of Island’s flats are hopeless. There is the occasional kingfish on them, but I wouldn’t waste my time.

The two big factors that set Bay of Island’s flats up to fail as kingfish flats are – (a) lack of current and (b) too sheltered from the open ocean. The flats in the Bay of Islands sit behind an extensive network of islands that put distance between the flat and the open ocean. This limits how many kingfish actually find their way in there and gives no close-by deep water to retreat to on the bottom of the tide.

These same islands diminish the strength of any water flow that touches the foreshore. The result is weak currents on the flats and tidal movements that don’t include any sideways flow. Generally speaking, the flats are enclosed – the water rises and falls with the tide. Any currents that do exist are inconsequential.

The Hauraki Gulf is a fairly similar sort of set-up, but it has a bigger tidal range than the Bay of Islands and currents that are a whole lot stronger as a result. This, combined with a couple of other factors, means that the greater Auckland area possesses some very good kingfish flats fishing indeed.

2) Understand that not all flats are ‘ray-rider’ flats – the ray riding phenomenon discussed in last month’s issue seems to be much less common north of Auckland. The reasons for this include there being a lot less short-tailed rays on suitable flats in the north, and potentially a much smaller abundance of the small flounder prey that seem to be so important from the Auckland flats south.

On a flat without ray-riders you need to follow baitfish visible from the surface. This will generally be piper (garfish) and mullet. Find an area with good schools of baitfish and stake it out. Watch for hits, splashes, bow-waves and full-on attacks. Learn to use the nervousness of piper as a guide for what is going on down below. A regular ‘spray’ of piper in one location can point to a group of otherwise unseen kingfish that are working a beat. Wait for the next piper flurry and get a fly or lure in front of it.

Mullet are more of a problem. They jump and jump and jump, seemingly for no reason half the time. Randomly jumping mullet in a warm bay can be a very big ‘red herring’ as far as kingfish activity is concerned. Sometimes you’ll see obvious kingfish sign in behind a fleeing mullet, but most of the time I ignore leaping mullet unless there is more than one, they’re all leaving the water in the same direction or they’re all in an obvious hurry!

Flies and lures need to be big, fat and noticeable when the kings are on mullet. Your offering can be easily missed amongst the melee.

(3) Look for flats that have ocean salinities and clean water – too much freshwater is a big kingfish turn-off. Any harbour system with big rivers may have flats that have too much freshwater. Some of the north-east coast’s many tidal rivers and small estuaries play host to regular runs of kingfish, but you want to be there after long dry spells, not after rain. Kahawai will tolerate low salinities close to full freshwater for short periods of time; kingfish will not.

Similarly, if the river or estuary mouth has an exposed entrance with big surf on it then come back on a day when the waves aren’t so big. Rarely will kingfish negotiate crashing surf in order to swim up the river. A bit of a fresh onshore wind is okay; a Hawaii-sized breaking swell is not. Thinking outside the square can lead you to flats that others haven't explored yet. Try rivermouths, quiet sandy bays and calm low tide beaches.

(4) Get your kingfish season right – don’t be in too much of a hurry once the weather warms up. Kingfish become sexually mature at about the 80cm mark and often spawn in offshore waters between November and Christmas. For this reason you may not see big kingfish on the flats during this time and you may not see any kingfish until spawning season is over. Kingfish simply don’t spawn in estuaries and up on the flats.

The good news is that the first run of kingfish inshore after spawning is often the best run of the whole year – the kingfish are lean, hungry, willing to bite and numerous. Unlike trout, they’re not particularly skinny or emaciated after spawning. They will have lost a bit of body fat and their bellies won’t be quite as round as they were pre-spawn, but they are still full of fight. A pack of early season kings crashing into a herded-up wall of baitfish on a shallow water flat is a pleasure to behold.

They seem to come in en-masse after spawning is over and every year the timing for this is different. In a warm year it might be mid-November; in a cold year it might be around Christmas time. We look for them in the Bay of Islands at this time of year and eagerly anticipate their arrival. There can be early fish of course and false starts and hints of kingfish activity, but until that spawning season is over it doesn’t really get going inshore.

These post-spawn kingfish do not, of course, include immature fish below the 80 to 90cm mark. Many fly fishers are quite happy chasing and releasing these smaller fish. There can often be good runs of smaller fish from October onwards.

Suffice to say, however, that if your journey to a kingfish flat involves any sort of travel then you may be sorely disappointed in the early parts of the ‘season’. It is an erratic and frustrating time of year for the flats-based kingfish hunter. New Year through to Easter is a better time to be looking. You may have to contend with crowds and full camping grounds right through January and on any fine summer weekend, but while the crowds can be maddening for us, the kingfish don’t seem to mind.