Josh Darby highlights the areas, gear and tactics that will go some way in helping you land kingfish on light gear.

While snapper may be the iconic New Zealand catch, there is little doubt that yellowtail kingfish follows close behind. In fact, for many anglers, kingfish, or haku as these fish are known in Te Ao Maori, are the ultimate catch – and rightly so! They are a stunning creature, featuring eye-catching green and yellow accents on a solid, yet streamlined figure. They are also a culinary delight, with their firm, delicious flesh making kingfish prime candidates for sashimi, raw fish dishes and curries. However, it is their incredible fighting power, more so than their looks or taste, that have left so many Kiwi anglers enamoured with them. Unsurprisingly then, the kingfish has come to be known as somewhat of a brute, renowned for its uncompromising fighting ability. It is not uncommon for an angler to find themselves breathless, bruised and ultimately empty handed after an encounter with these kings of the ocean.

Adding to the difficulty of catching a kingfish is the reality that their size and power is combined with the challenge of removing them from their natural habitat. These fish tend to predate around headlands, pinnacles and high current areas littered with foul. This means that hooking a kingfish is only half the challenge, as they can then power off to the relative safety of the reef in seconds. In these scenarios, it is wise to use heavy gear to give yourself the best chance to turn the kingfish before they bust you off – often this includes heavy drag systems that are smooth, 14kg plus, and a line class starting at 24kg, with 37kg plus being the wiser choice. Not only does this choice in tackle help you stop these brutes before they bust you off, it also reduces the chance of leaving your hook/jig/stickbait and broken portion of line with the fish – a situation we should all seek to avoid. Thankfully, there are times when it is possible to go toe to toe with a kingfish on much lighter gear, enjoy the battle and be confident in landing these fish.

As mentioned earlier, kingfish tend to predate in areas close to the relative safety of reef structures. However, like many other predators, they like to hang out near their food, which means you can also find them close to bait schools in the workups, as well as in sandy-bottomed channels, harbours and bays. They are also often found in the areas commonly soft-baited, such as around the wash produced by swells impacting rocky outcrops and headlands, as well as over low-lying foul in the shallows. Soft-baiting these areas, especially in the Far North, will sometimes produce kingfish as a bycatch. While I do not target kingfish with soft-baiting gear in these areas for the aforementioned reasons, it is useful to know what to do if you do happen to hook one while targeting snapper. I will cover some tips for this scenario in the ‘tactics’ section later. Kingfish can often be found around structure and in high current areas. It is best to use appropriately heavy tackle to target them in these locations.

Kingfish can be successfully targeted on much lighter soft-bait type set-ups (4-10kg rod, 2000-4000 size reel, 20/30lb braid and leader) over the sand and away from structure. In fact, in some of these areas, they are also targeted with fly rods.

Hooking a kingfish over the sand generally means you do not have to worry about a bust off on the reef, yet the brute like nature of these fish still requires a light tackle set that is up to the task. While you won’t need a super heavy drag to stop and turn the fish, it is vital you have a smooth drag. This is because kingfish can accelerate suddenly and often, which can lead to a bust off due to the shock loading your line can encounter with a sticky drag.

I tend to run slightly heavier soft-bait gear these days to ensure I reduce bust offs and the risk of having a fish carry around my lure and trailing line. This includes using 30lb braid and a 25/30lb leader, which gives you a lot more confidence when you find yourself hooked up to a kingfish. It is fine to use the jigheads and hard-bodied lures you would normally use to target snapper; if the hooks can stand up to the shell and crustacean crunching jaws of snapper, they’ll be just fine for kingfish. Even modest kingfish are great fun on soft-bait setups.

There are two sets of tactics to cover here: tactics when targeting, fighting and landing kingfish over the sand (workups, channels, estuaries) and tactics for when you hook a kingfish as bycatch in shallow foul areas.

Firstly, the over the sand scenario. Kingfish can be targeted using a number of light tackle lures, such as soft-baits and hard-bodied lures (kaburas/sliding lures, inchiku lures, micro-jigs and smaller knife jigs). In workup situations, using the methods for targeting snapper will often also entice a bite from a kingfish. However, they can also be targeted by identifying larger, often mid-water, marks on your sounder. Given the predatory nature of these fish, they can be ‘turned on’ by fast erratic movements – so, taking a note of the depth of these marks, retrieve your soft-bait or hard-bodied lure rapidly, or with fast erratic movements, in the vicinity of these marks. Similar tactics can be used when fishing around bait schools in channels or bays. 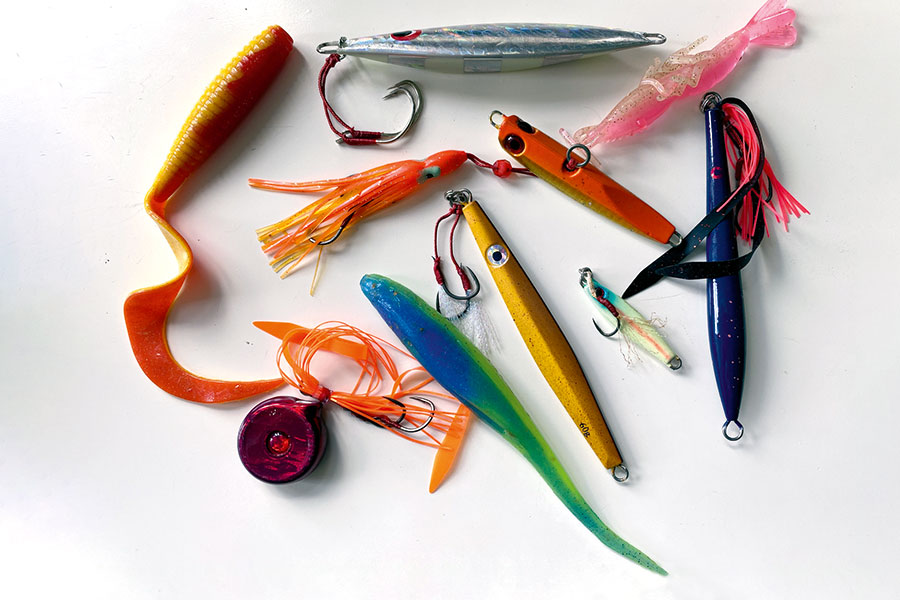 An assortment of lures that can be used to target kingfish on light tackle.

Whatever the location, the most important thing to do when you find yourself hooked up to a kingfish on light tackle is to not panic! This is easier said than done, as I know the feelings experienced as you bear witness to the line on your relatively small spool rapidly emptying. However, it is panicking in this situation which is almost certain to create an unnecessary bust-off. I have lost count of the number of times I have seen anglers panic and respond to line stripping off their reel by tightening their drag or pumping their rod and winding their reel. While this response may be understandable given the disappearing line, remember, there is nothing for the kingfish to bust you off on. Therefore, tightening your drag may be the worst thing you can do, especially given drag pressure increases automatically as the diameter of your spool decreases. While there is the risk of a kingfish spooling you completely, this can be minimised by having someone on the helm ready to chase after it.

Not panicking also involves keeping everything smooth, and by smooth, I mean the lift of your rod should be gentle and so should its decent. Of course, you want to maintain a bend in the rod tip at all times, but not with erratic lifting or winding. Let your rod do the work – wait for the fish to finish its run and the load to lessen on your rod before you lift or wind. Finally, not panicking means being prepared to keep this steady, slow, and smooth action up for considerably more time than you may be used to. A decent size kingfish may take anywhere from 15 minutes to over an hour to land on light tackle.

There are a few additional tips if you do happen to hook a decent sized kingfish in the shallows and around structure. Unfortunately, you will be relying on a certain amount of luck in these situations; however, reducing the amount of line angle and line between you and the fish can be helpful. This is achieved by having someone on the helm moving you slowly in the direction of your fish. In these scenarios, the cunning kingfish will often make its way through dense kelp, which you will often experience as an unnatural and unnerving pinging of the line. Sometimes opening the bail arm on your reel, producing slack line, will allow the fish to swim the line free itself. In other situations, you may need to drive around the point of entanglement to see if a different leverage angle will free the snag (in some instances we have had to attempt this three or more times before landing the fish!).

Kingfish can be difficult to deal with at the side of the boat, even when using heavy tackle. Unlike snapper, which can quite often be spent upon arrival at the boat, a kingfish almost always has a few more runs in them. Unfortunately, they have a tendency to use this additional energy and superior manoeuvrability to circle the boat or suddenly change direction risking a bust off on your outboard or the side of the boat. Again, this requires patience and alertness as well as someone on the helm who can manoeuvre the boat to keep the fish where you want it.

With the fish on the surface, it is important to keep your line taught and have the right tools on hand. A large net is likely to suffice for just legal fish, but ensure you net from the head and not the tail. Too often I see anglers ‘chasing’ a kingfish with their net from the tail end, which only encourages the fish to escape. I also find it helpful, when netting any fish, to keep the net out of the water until right before I’m ready to scoop up my catch headfirst. This avoids the chasing scenario, where your fish can see the net and seeks to avoid it at all costs. For larger kingfish that you wish to keep, I suggest using a gaff. Wait until the kingfish is on the surface and no longer making attempts at an escape, then quickly plunge your gaff into the water and under the shoulder area of the kingfish, then quickly and firmly pull the gaff straight back up through the shoulder of the fish.

There is little doubt that kingfish are a truly prized catch in Aotearoa, both for their fighting ability and culinary potential. Hopefully then, this article has provided you a few tips that will help you target, fight and land a kingfish on your light tackle setup.