Keeping Baits On The Hook When Surfcasting - Part 2 Bruce Basher shares another tried-and-true surfcasting bait that is a little different to the norm...

For the most part, these baits are similar to those used by boat anglers; the use of cotton or bait elastic to keep everything together being the exception.

As such, some of these bait-rigging methods will possibly be in your bait arsenal already – except the last one! This final idea I pinched from a South African source and to my knowledge, it has not appeared in NZ Fishing News or any other NZ publication. It’s a good one too!

I will start by addressing a common problem surfcasters have with their baits when casting, especially if using a clip-down rig. The Breakaway Impact Shield and the Imp Clip are the most popular choices for clips.

If using either of these on a pulley rig, the trace must be kept straight, right to the hook. This is bad news if, like myself, you’re in the habit of ‘sewing’ the hook and trace through the bait. While this adds extra strength when casting a ledger or running rig, it can be a disaster on a pulley rig.

So, why is this? The extra force and weight generated by the cast will straighten out the ‘sewn in’ trace. This will pull the main hook out of the front of the bait and leave it dangling. A fish could therefore pick up the bait and move off with the possibility of the hook not engaging.

My personal opinion on rigging with strip baits is that it works best with a fixed keeper hook. Because I’m obsessed with having the hooks at 90 degrees to each other, I do something just a little different.

Looking at Photo One, you’ll see that the keeper hook end of the strip bait has had the skin rolled under the flesh. This provides some skin for the keeper to go through and allows 90 degree placement of the keeper while adding strength to that area.

Binding is minimal and only enough should be used to keep all that exposed flesh in one piece. This bait works well when made up in advance and soaked in fish oil. If stored in a zip-lock plastic bag, they’ll be ready to go in an instant!

This is my go-to bait when after blue moki and spotty dogfish. It’s pretty easy to tie and, like most other baits in this series, can be pre-tied and frozen for later use.

I like to use two hooks, one a main and the other a keeper. Place the prawn, or crayfish tail for that matter, onto the hooks. As prawn and cray tail are rather soft, they will need to be bound well. Part the way through the binding, place tuatua or mussel pieces in places along the prawn as in Photo Two.

Sometimes, if I need a general purpose bait, I substitute the prawn for octopus leg. This saves quite a bit of binding and attracts all sorts of species. It’s quite a lot harder for small fish to destroy too!

This is the ‘stolen South African bait’ and is a good swimming squid imitation. It does require some preparation so is best made at home on a rainy day and frozen in zip lock bags for later use. 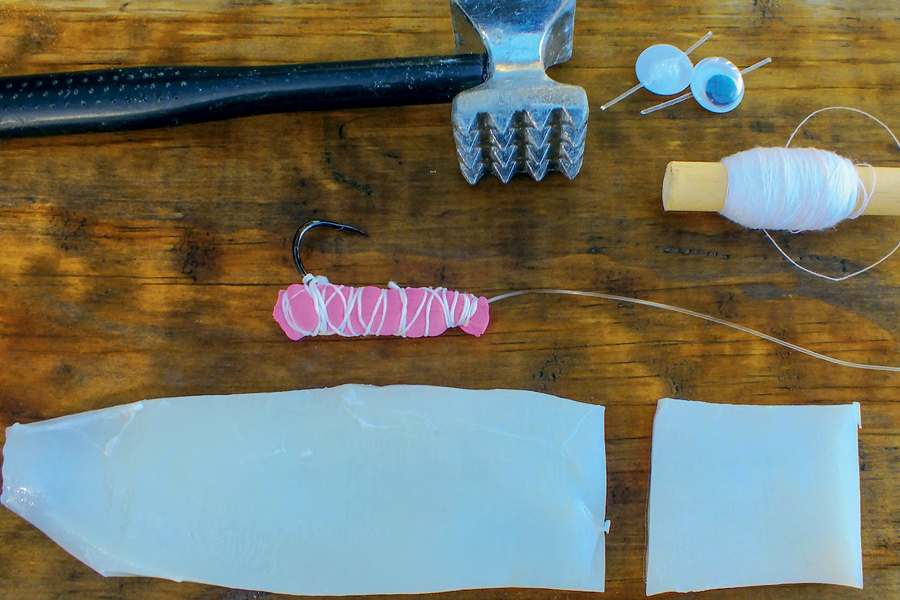 After tying a hook to the trace, you will need to bind a piece of foam to your hook as in Photo Three. The foam needs to be placed carefully and should extend a little beyond the hook eye and along the shank to just past the bend. In this case the foam is 50mm long and the hook is size 6/0.

The foam should have a square section of approx 8mm x 8mm. Do not use polystyrene – it’s too fragile! I cut strips off of a set of foam gardening kneeling pads.

These can be found for sale at gardening shops.

Now cut a strip of squid body about 40 to 50mm wide and 240mm long. Cut a piece approx 50mm long off one end. Now ‘tenderise’ this small piece with a steak hammer, but don’t beat the hell out of it till it falls apart. Now do the same to a 50mm section of the longer piece of squid. Leave about 20mm untouched and then cut some tentacles into the rest of the longer piece. The hook with its foam piece attached is inserted through the ‘non- tenderised’ piece of squid as in Photo Four. The ‘tenderised’ part is then wrapped around the foam to look like a squid’s body. 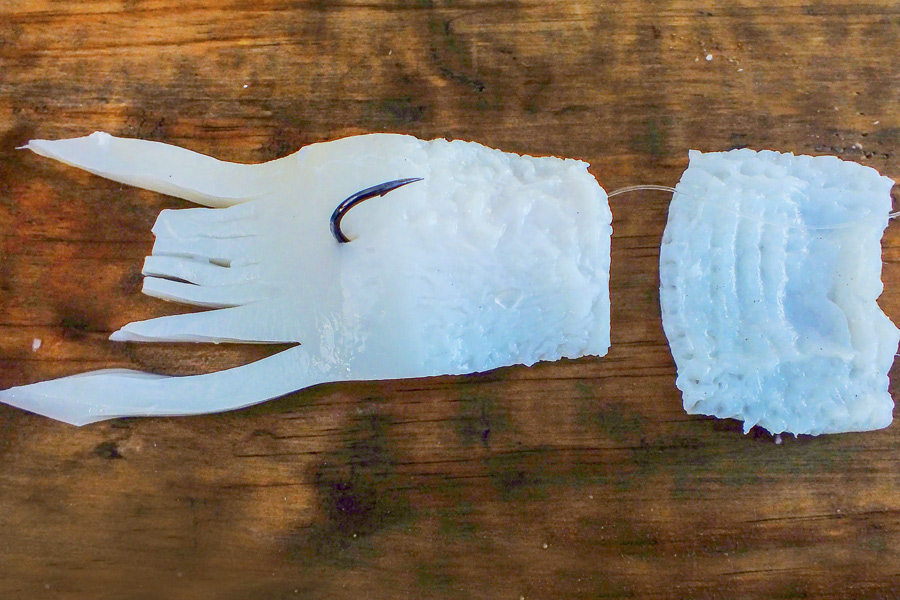 I normally like the more lengthy ‘grasper’ tentacles much longer than shown in the photo, but this one was tied in the field and I only had a short piece of squid left to make it. Next, bind the main body of the bait quite firmly and then bind on the smaller section of tenderised squid to plump up the body a bit more. Form a squid body shape with your fingers as you bind. If you want a fatter body then bind on another tenderised piece.

This is where the South African contribution ends and my own begins. I bought some large ‘googly eyes’ from a craft shop and glued short lengths of mono to the back of them. The pupils in these eyes are loose and move around quite realistically.

When I’ve almost finished binding the squid, I place these onto the body where a real squid’s eye would be. I then bind around the mono sticking out from the back of the eyes to hold them onto the body. Tie off the cotton to finish. Now does that look realistic or what?! In the water these baits are quite buoyant and will waft around in any small current or surge. The exposed bend and point of the hook acts as a keel and will be hanging downward so the juices released by all that steak-hammer action will be wafting about. No wonder this bait is popular in the land of the Springbok!

I use bait elastic to bind the foam to the hook and cotton for the rest. This is because the cotton will absorb some of the squid juices while it’s being made and release them when in the water.

This bait could also be used by boat anglers with a little weight added in place of the foam. Perhaps by doing this it could become a cast-and-retrieve bait for rock based fishermen too. An erratic retrieve should see the tentacles waving about like a real squid.

If you can’t catch a fish on this bait then I suggest you tie a small piece of plastic onto the squid. Then, with a permanent marker, write “bite me” on the plastic!

This finishes my contribution to the “Baiting Up” series. I sure hope at least some of them work as well for you as they have done for me