Being a keen kayak fisherman has taken its toll on my body over the years. Having paired my love of fishing with a job as an artist and sign-writer, I spent many years suffering from a condition called 'painter's shoulder – something that was further aggravated by my insistence on hitting the water with paddle in hand.

While fishing, the injury could be managed by changing my body position, but the paddling was never easy. It even took me down the path of fitting a Minn Kota electric motor to a kayak that was capable of handling it, and for a while, it helped. Personally, I struggled with the concept of a motor, given that I am a kayak purist, in my eyes, you may as well buy a small boat if you are looking at this option and that was likely to be my choice if I were to continue my lure fishing addiction.

That’s when the Old Town Predator PDL happened to grab my attention – and thanks to the New Zealand distributor, Outdoor Sports, I soon had one to play with. The kayak’s ability obviously overcame my condition, yet the extent of this would not be realised until I had put it through its paces over a period of years. 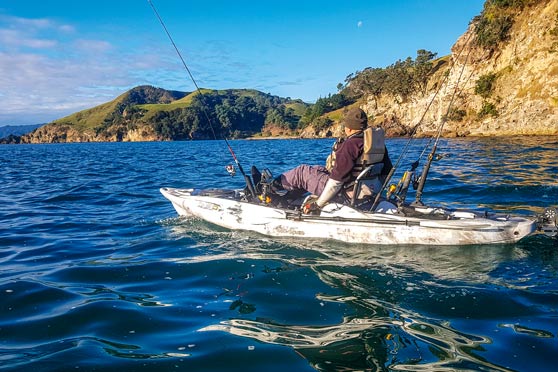 Pedal-powered propulsion is nothing new, but there have been some advancements that make the newer styles more popular.

The PDL kayak's drive unit is entirely different to the alternative, longer-established system that Hobie kayaks use. The Hobie unit incorporates fins for propulsion, while the PDL unit has a propeller. Both have advantages and disadvantages – a Hobie kayak’s drive system offers linkages to work the fins, and this influences the pedalling action, which in the Hobie requires the user to move in a forward to back motion. The drive fins also fold up to sit flush against the kayak, which is useful in a surf situation.

The downside to this style of propulsion is that it can suffer from breakages in the chain links, so spares are best carried, especially on offshore trips. The original system only moves the kayak forward, although they have now released a version that can reverse. The downside is that the drive system has to be paused before engaging reverse.

The PDL drive system is different, with the ability to propel the kayak forward and in reverse, which is done with a more conventional action familiar from pedalling a bicycle. The drive unit uses a set of gears and a driveshaft, not a chain. It is also very solid and has proven to be very reliable. I have covered some really long distances using this drive, clocking over 900km in one year and 1600km during the two years this unit is warrantied for.

The downside to the PDL’s drive system is that it requires lifting out of the water when you reach depths of less than half a metre, which can make shallow surf beaches tricky to deal with. This would be a primary influence when making a choice of the type of kayak and its pedal-powered system. However, because it is driven by your legs, it is easy to find a better launch location because travelling some extra distance to get to the fishing grounds is not a big deal under pedal power.

The advantages of pedal power

With pedal-powered kayaks using the legs to drive the kayak to a location, you are left with your hands free to do whatever you want. This really changes things significantly as far as your ability to fish and how things go from the moment you to get on the water. It also means you get launched sooner because things like gloves and sunblock can be applied while travelling.

On average, the travel speed is quicker too because the legs are much better able to work hard in comparison to the arms. We use our legs every day to walk and run, so they are much more suited to constant exercise, and as a result will allow you to travel much greater distances.

The real advantage is in fishing opportunities – like trolling, where it is possible to place the rod in hand for better detection of interest from a fish. Even when the rod is in a holder, it’s possible to position it slightly forward and beside you where an eye can be kept on the rod tip. This simply isn’t possible when using a traditional paddle, as the rod and line get in the way of paddling.

An anchor system and/or drift chute are also not strictly necessary, especially when drift-fishing over an area, because the kayak’s drive system creates enough drag to slow you down. Add to this the ability to use the pedals to control speed as well as direction, and you completely remove the need for any drogue or chute.

Having the ability to work the drive unit while fishing opens all sorts of opportunities paddle kayaks can’t touch. Situations like where swells are crashing onto the rocks or wash zones, are prime examples of where fish like snapper often sit waiting to feed on anything that becomes dislodged. This is a hazardous place to fish, especially when a large hooked snapper runs in towards the rocks pulling the kayak along with it.

With the paddle vessel, you have no option but to open the bail arm or place the reel in free spool mode, putting the rod down so you can paddle backwards – unlike the pedal kayak, which can be moved back while the rod is in hand. Pedalling also allows you to manoeuvre the fish away from the rocks.

Then there are moments when a big fish peels line from the reel, which can leave the kayak angler at a disadvantage because of line angle and the fish having the ability to run for foul ground more easily.  With the pedal kayak, it’s possible to chase the fish down and keep on top of it, which allows the angler to lift it away from the bottom.

Fishing techniques like mechanical jigging are also much better suited to pedal power because it's much easier to position over fish sign and drop down to them. Micro-jigs are even better, and pedal power allows an angler to use the sounder in conjunction with his ability to move the drive system into reverse when travelling along, stopping over fish sign and dropping the jig to fish more accurately.

Using this style of kayak has seen a massive increase in my active hunting ability and has resulted in the capture of many more double-figure fish.

One of the most challenging things to do from a kayak is to chase workups. Often by the time you’ve caught up, everything has moved on before you can even drop a lure. With pedal power, it is possible to stay with the fish while holding onto the rod – and of course, cast lures or drop jigs every time you are in the zone.

Having the ability to not only travel at consistently higher than average speeds but also for longer before getting tired means you are able to go much further than you would consider when paddling. Because of this, you are more likely to explore areas that would typically be out of range. As well as the aforementioned bonuses associated with pedal-powered kayaks, the design of the PDL offers users further advantages. Firstly its drive system sitting down below the kayak acts as a keel. This provides greater stability to a kayak design that is already more stable than most, giving the angler an ability to stand and fish – and not just in flat conditions either!

The Predator PDL’s greater beam provide this stability but it doesn't slow you down - I maintained an average cruising speed of seven to eight knots. the kayak's extra stability also allows the angler to use much higher drag pressures than normal which is an advantage when pulling hard fighting kingfish away from the sea floor.

Aboard the PDL, comfort is at a premium because the seat provides better support and suspends the angler off the deck of the kayak, meaning a much drier ride. The seat is so good that after a big day on the water you don’t suffer from a numb rear end or loss of sensation in the legs because you are sitting with your legs bent in a more natural position.

The seating position also keeps your legs away from contact with fish spikes that might cause injury and struggling fish are also more contained when they come on board the kayak, for easier handling and less risk of being lost over the side. Loading fish into the rear well area is easier as well because the seating position allows greater body movement and the kayak’s stability provides the confidence to move about.

With features like this, it’s easy to see why my kayak fishing has now reached the upper levels of my ability and thirst for adventure. Yes, pedal-powered kayaks do cost a bit more than traditional ‘yaks, but in my opinion, the differences are well worth the money. If you consider the cost of fuel has risen to some of the highest levels ever and with our carbon footprint starting to impact on the world’s environment, the long-term savings this type of vessel offers, plus the benefits to the body of exercise, make pedal-powered kayaks an option well worth exploring. 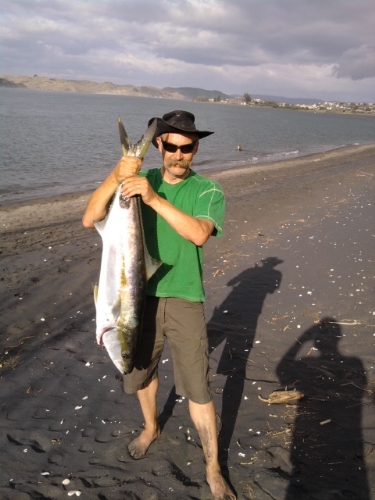