Kayak Fishing - The Hazard of Sharks

A shark encounter can be a nervous experience for even the most experienced kayaker. 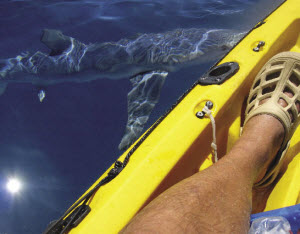 I don’t know which of these two hazards ranks foremost among kayak fishers: the fear of capsizing and then watching your kayak blow away or the terror of a shark attack.

While the fear of capsizing can easily be put to rest with a tether and regular self-rescue training, shark attacks are not so readily banished from one’s mind. My own fear of sharks seems to increase the more I think about them – an irrational cycle that can easily spiral out of control.

I try taking charge of my anxiety by consoling myself with the often-quoted advice that I run a greater risk of getting run over by a car or being struck by lightning than being eaten by a shark. On the face of it such statistics seem reassuring, as long as you only compare millions of apples with a handful of pears. My hunch is that, by doing the right maths, the odds would tilt in favour of Jaws.

Notwithstanding my 33-year career in conservation management, I still can’t muster the new-age philosophy of some kayak fishers that sharing the ocean with these magnificent apex predators is a privilege and that becoming a shark’s dinner is just raw nature at work. Nor do I find solace in the theory that sharks do not actually like to eat people and only bite off part of their anatomy by mistake. Much as I hate to admit it, I am just dead scared of XXXL sharks.

There are only two logical options that bring me back to reality from such mental torment. The first and most reassuring is that very few encounters between potential man-eaters and kayak fishers have occurred in New Zealand. And secondly, there are positive steps one can take to even further minimise the risk of an invited shark visit. When I say an ‘invited visit’ I mean exactly that, because some of the fishing practices that have crept into our sport are an open invitation for those ocean-roaming scavengers.

Luckily, our temperate seas largely keep out the dangerous sharks of the tropics, such as tiger, bull and reef sharks. Yes, we have some species of hammerheads and plenty of big makos, both of which have been implicated in attacks on people overseas, but to my knowledge neither has attacked a kayak in this country.

Without doubt our most dangerous shark is the great white. Nobody really knows if we have true residents in New Zealand seas. Chances are our island archipelago is one of many staging posts that great white sharks regularly visit on their vast oceanic travels. So little is known about the private life of this species that we can’t even guess how many are patrolling our shores at any one time. The common wisdom is that they are rare to the point of being endangered, hence the recent law change to protect them in our territorial waters.

Whilst I can see the reason for such a protection order, as a kayak fisher I secretly hope that this conservation initiative does not end up like the recovery programme for saltwater crocs in northern Australia. Over there, measures have been so successful that just standing knee-deep in some inland or coastal waters is akin to playing Russian Roulette with a near fully-loaded revolver.

Without wanting to sound ghoulish, I like to think that we kayak fishers sitting in a vessel are less attractive to sharks than surfers, divers, spearos or swimmers. Not that they have much to fear either, because (according to the official New Zealand shark attack statistics) such incidents are quite rare. When you take all that into consideration, it lessens our risks of an attack even further.

However, this is not to say that we should disregard the implications of tourist cage diving with great white sharks, as practiced in the Chathams, and some DoC research methods employed on them here. Both operations use copious quantities of berley and large decoys to attract sharks close up. In my book this creates a dangerous association with food and people. If goldfish can be trained to respond to a finger tap on the aquarium prior to food being dropped into the water, then who is to say great white sharks can’t be conditioned in a similar way? When we then consider their capacity to memorise what they have learnt, we should not be surprised if they start taking an unhealthy interest in boats, and the smaller kayaks in particular.

So what can we kayak fishers do to minimise our exposure to a shark attack? The most obvious action is not to advertise the kayak as a floating food bank. In practical terms this means:

Don’t berley ‘directly’ from the kayak;
Don’t process fish or bait on board;
Don’t put fish in a well that allows blood and fish scent to leach from open scuppers;
If blood from gaffing or iki-ing fish ends up on your kayak, wash it off as quickly as possible;
Be aware that the vibrations given off by fighting fish travel a long way and are one of the signals sharks home in on. Bring fish in as quickly as you can. Kill them to stop them flapping, otherwise drumming in the well or bin can attract sharks to the source of the noise;
Sharks are known to regularly bite into metal parts of boats. Apparently metal (like the muscle activity of fish) gives off an electro-magnetic current that can be registered by a special gland on the shark’s nose. I don’t know if that allows them to detect the presence of kayak electronics or the small metal rudder blade, but since these animals are said to have the strongest jaws in the animal kingdom, even an exploratory chomp into a thin polyethylene hull would likely be a disaster.
I am aware that despite taking all the above precautions there is always a chance of meeting the ‘Taranaki Terror’. To be honest I don’t know how I would react, but I would definitely not emulate the mistake some New Plymouth boaties made a few years ago. They were out fishing when a great white shark turned up, which they claimed was at least as long as their boat. As the big fish began circling, the fisherman got worried and attempted to get rid of it by feeding it some of their catch. Not surprisingly that just made the shark even bolder. Finally it attacked the boat, sinking its teeth so fiercely into the aluminium hull that it left impressive gouge marks in the metal.

I also hope I could stay calmer than the fisherman from up north, who had a big shark steal fish from his longline while pulling it up. Overcome by panic, the man somehow stabbed himself with his knife and then involuntarily contributed material from several of his bodily orifices to the blood seeping from his ‘yak. Miraculously the shark never attacked.

This proves that just because a shark investigates your kayak, it does not automatically want to eat you.

So what should you to do if a big bitie turns up and starts circling your kayak? Should you stay and wait until it loses interest, or paddle off, hoping it won’t chase the ‘fleeing prey’? In my mind I have rehearsed these options quite often, and eventually have come down on the side of quietly leaving the scene. I would cut my anchor and berley line, and head for the nearest landing site. Initially though, I would paddle backwards for a while, so I could see if the shark is following, all the while being thankful that any leaked body fluids will remain safely contained in my waterproof paddle pants.

Come to think of it, writing and researching this article has been very therapeutic for me, in that it reaffirmed the obvious. Shark attacks are rare, and even more rarely involve kayak fishers. So perhaps it is true that we have more chance being struck by lightning or winning Lotto than being attacked by a shark. Thank God for such a handy crutch to cling to next time I mistake a raised seal flipper for a big dorsal fin.

This is how partners view kayak fishing!