Stephen Tapp reports that the kayak-fishing limits have been pushed out even further.

Historically, the sport of kayak fishing has its roots in the hunter-gatherer communities of the Arctic. These singlehulled, double-ended craft were constructed of skin over a frame, had decks and an enclosed cockpit, and were propelled by a double-ended paddle. Comparatively light in weight, they gave easy access to the water, and provided efficient transport in a harsh environment. Paddle forward to early last century, and the most significant changes were in the construction materials used. Lightweight canvas and laminated frames replaced seal skins covering a mixture of timber and whale bones. In turn, this was replaced with composite materials, providing greater strength and rigidity, but also allowing designers to start pushing design boundaries.

The early 1980s saw a very significant advance in kayak manufacture: the use of rotationally-moulded polyethylene. Initially this was simply a means of producing large numbers of robust and relatively inexpensive kayaks, but it didn’t take long for the sit-on-top design to make an appearance. Finally, a true revolution in kayak design, resulting in an affordable and robust craft with a free-draining cockpit, with the latter meaning paddlers no longer had to learn and maintain rolling or other self-rescue techniques. Instead, deep-water re-entries onto sit-on kayaks are comparatively straightforward, making it possible for divers and snorkellers to utilise them as dive platforms.

The sit-on-top design has massive appeal for anglers, too. Aside from simplifying self-rescues, their stable nature and open cockpit deliver great load capacity and a variety of storage options. No longer are we limited to a few pillies and a hand-line; in fact, some of us end up carrying more tackle than many boaties!

Throughout much of this kayak evolution, the main means of propulsion remained the same: a double-ended paddle. While the paddle itself has seen improvements in design and construction, the only other way (until quite recently) of moving a kayak across the water was by sail. These can be effective downwind, but since kayaks have so little hull in the water, it takes some serious modifications to get them to sail across or upwind (multiple hulls, lee-boards etc.).

Then, in 1997, the first commercial pedaldrive system was introduced. Hobie led the way with their ‘penguin flippers’, while companies such as Native Watercraft came out with their Propel system, based around more conventional propeller technology. Anglers looking for more power also took to grafting powered propulsion to their kayaks. It started with electric trolling motors, and now small two- or four-stroke petrol outboards are sometimes seen mounted on the side or stern.

For many kayak anglers, the initial appeal with such systems is the reduced work load, but they quickly discovered other hands-free benefits to be gained, too. The most commonly talked about is the ability to idle forward into the wind, while controlling and staying in touch with descending lures or baits. This is far easier to accomplish when the angler doesn’t have to paddle as well.

Like everything though, there are compromises that must be considered. Sails, while in keeping with the stealthy kayak theme, add considerably to deck clutter and don’t provide the desired assistance into the wind. Pedal-drives can be almost as quiet as using a paddle, so definitely fit a kayak’s ability to sneak up on the quarry, but by sitting below the keel they compromise a kayak’s shallow water performance (particularly propeller-based systems). Typically, they also need a wider kayak for stability and to accommodate the raised, adjustable seating positions necessary for good ergonomics.

The effects of the reduced efficiency of these wider pedal kayaks are overcome by more leg power (compared to paddling), but the unavoidable consequence for a given length is a heavier kayak. Another compromise with typical pedal systems and their associated through-hull fitting is the loss of prime, central-cockpit real estate, affecting storage options such as fully self-contained tackle pods.

The small petrol outboard systems offer enormous power gains over anything human powered, but noise and added maintenance are significant compromises. Where they excel, though, is in offering tremendous range for a relatively light fuel load. So, while they haven’t really caught the interest of the typical snapper snooper, they may well suit anglers wanting to troll bigger lures further afield.

Now we come to the latest evolution in kayak fishing – one that can combine all the various kayaks’ technological improvements with the latest in energy storage and power options.

Although electric motors have been around for a while now, the traditional trolling motors and lead-acid battery storage systems are a heavy burden for a kayak. On the plus side, they are comparatively quiet, can be stern mounted, and are able to be steered with pedals. This results in the angler having foot-controlled directional thrust as well as phenomenal manoeuvrability – just what the doctor ordered when dealing with big fish on a windy and choppy day. (I enjoyed this feature the most when using a Stealthdrive, arguably the first of the purpose-designed electric propulsion systems for kayaks.)

Now we come to the current evolution of fishing-kayak propulsion, the Bixpy Jet. This lightweight powerhouse combines the latest lightweight battery technology with a compact, brushless motor and a totally different approach to propellers. Instead of spinning the larger and longer blades of traditional electric trolling motors, Bixpy has opted for three small broad blades inside a cowling.

The result of this ducted, jet-like system is a compact unit (the prop cowl’s diameter is the same as the motor housing) that retains the thrust of much bigger electric trolling motors. In fact, it’s capable of pushing a Viking Reload with angler and tackle along at 9-11kph (4-6 knots), depending on conditions and kayak trim. 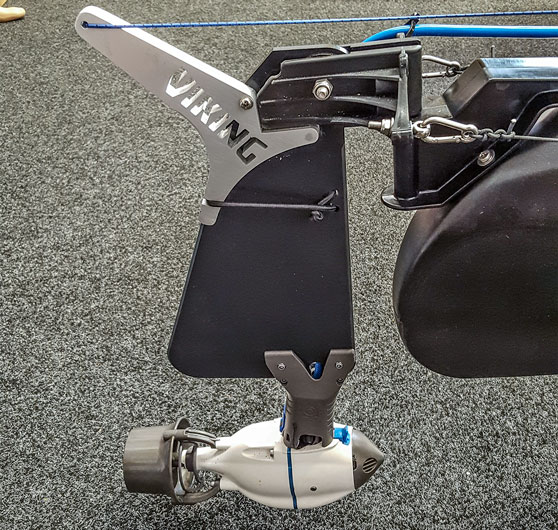 One benefit is the tremendous reduction in drag when the very small propeller isn’t powered. For the first time it’s practical to paddle the kayak with the motor system still in the water, saving battery capacity for later in the journey. The result is a system that ticks all my boxes as a kayak angler...

• Quiet enough to maintain the stealth aspect of fishing from kayaks;

• Directional thrust, rather than relying on a rudder, for precise low-speed handling;

• Light weight so it doesn’t affect kayak trim and performance;

• Low drag, so I can paddle without running the motor to conserve battery;

• Shallow draft so I can sneak into all the tight places I like to explore;

• Wireless remote system so there aren’t any extra cables in the cockpit;

• The icing on the cake: my aging arms and shoulder joints get to take a rest whenever I’m using the Bixpy, allowing my energy to be more dedicated towards landing the big one!

The first test units arrived just in time for a kayak-fishing trip to Great Barrier Island, accompanied by a very windy forecast – perfect conditions for testing a new motor system.

Mounting the Bixpy Jet to the bottom of an Angler rudder blade proved simple, as did fitting the unit to replace the existing rudder. The first really big surprise came when putting the mounted Bixpy and rudder assembly (along with the battery pack and cable) on a set of scales. The digits flicked over to a combined weight of 5.1kg! That’s only a little more than two of the 7Ah batteries most kayakers power their sounders with!

The next massive surprise was the efficiency of the lightweight system. Grant and Brad had first play, and after launching we headed out into the wind. Despite flailing away with my paddle as hard as I could, I could not keep up. Two very smug anglers took great delight in zooming about in the stiff breeze, motoring over to see how we were doing, then disappearing out into the chop and slop again. 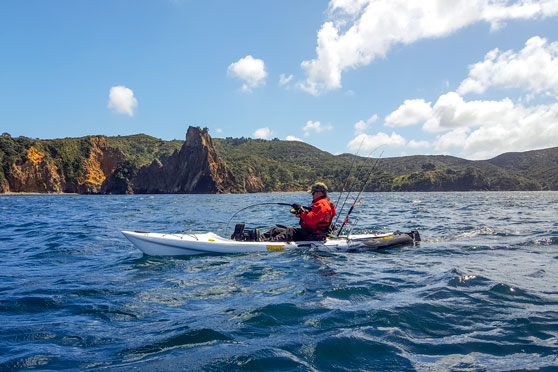 It quickly became evident just how successful this system could be when fishing. By idling into the wind, the guys could fish soft-baits in a variety of directions, yet easily stay in touch with their lures. Since no sea anchor was deployed, it was easy to run fish down and keep them out of the kelp.

Grant also developed a technique where he set the output from the Bixpy Jet to match the wind – effectively eliminating the wind’s influence and staying stationary. He’d then dip in some light paddle strokes to move forward or back-paddle lightly to move in the other direction. By steering with his feet, Grant could finesse every cast without having to adjust the motor via its wireless remote.

Despite the windy conditions, and with judicious use of power and paddle, the guys managed several hours of fishing on a single charge. Even paddling in the wind without the motor running wasn’t hard, showing the potential to save the battery for the journey home. In fact, the Bixpy Jets did so well, it proved impossible to liberate them from Grant and Brad so the rest of us could have a play, too... 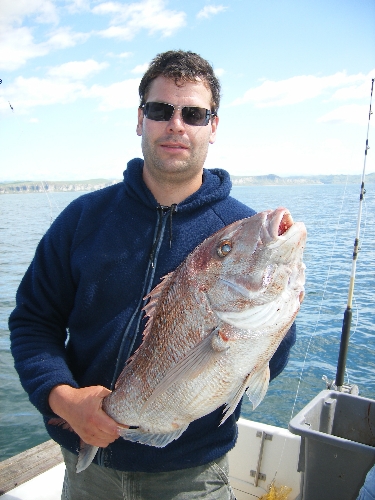