Those Tupperware tubs are some of the most versatile and economic fishing machines on the water. I would go as far as to say fishing kayaks are probably the only fishing vessels that will ever pay for themselves. Even an average fisho can soon recover his initial outlay, and many have done so several times over.

There is no better cost-benefit ratio example than when starting cray-potting, even if investing further dollars in potting hardware. It is quite conceivable that the shop value of the first night’s catch exceeds the purchase price of the three pots the law allows you to set.

Considering that this delicacy is spread right around the reefy coasts of both main islands, it really surprises me that not more kayak fishers go after crayfish.

There might be several reasons for this reluctance. Perhaps the most common is the fear that kayaks are too unstable to safely ferry cray pots offshore and/or to pull them up without tipping over. Providing there is a relatively benign launch site and calm seas, I have taken all three #8 wire beehive pots as one load on my Ocean Kayak Prowler 13. And, under similar conditions, I have also brought them in as a single load. I shall go into more details about pulling pots later, but let me just say I have never had any incidents, even in big seas that have come close to tipping me over.

A more pragmatic reason for not setting pots is that this involves an overnight exercise, as crays are only active at night. This commits you to doing at least two trips: one for setting the pots and another for checking or recovering them the next morning. Many fishers just don’t have the time for such a commitment, especially during winter. However, if you live near the coast, it is possible to do so outside working hours during the summer daylight-saving months.

Recreational cray pots come in several models. For budding kayak cray-potters, the collapsible net types have the most appeal, as they are also light and cheap. I started my potting ventures with this type after noticing two languishing in my neighbour’s backyard. We did a deal that I could use them, providing I shared the catch.

However, this turned out to be a bum deal, as this involved some arduous carries across an extensive reef at low tide for very meagre returns. The problem was not a lack of crays though, as I saw several divers bring back full dive bags from the very reef I had set my pots.

As I was to find out later, the problem was the pots themselves. Net pots are very light, and even though I weighted them with old railway fishplates, the netted hoops moved when the buoy got lifted in the lightest swell. Crays don’t like unstable surfaces and definitely dislike climbing over thin netting.

Eventually I lost one pot in a storm, which my smart neighbour quickly replaced with a round beehive wire pot. It was then that I realised the true difference between the two types of pots. The stable wire pot caught many more crays, even though both pots were set on the same reef.

That was a long time ago, and although I have experimented with other wire designs, the beehive pots have remained my firm favorites.

The initial baiting should be done before launching and does not present any problems. Rebaiting pots in choppy seas is a different story, as a concentrated effort is required to load a bait cage in and out of a pot that is resting on one’s lap. While battling with this awkward task, it’s necessary to take one’s eyes off oncoming waves – something I try to avoid at all costs. To overcome this problem, I have installed a bait cage that I can attend to quickly and safely from the outside.

In addition to the externally serviced bait cage, I use a two-rope bridle, which is attached on opposite sides of the pot. I make the bridle long enough so that it forms a triangle that extends about one metre above the pot’s funnel with the lift of a small buoy. I do not want a moving bridle rope to be too close to the pot’s funnel, as this could scare off a cray when it inadvertently rubs over its feelers.

My main rope is 15m of 4mm polypropylene. Four millimetres is thick enough for easy pulling but not so thick it creates additional drag in strong currents. For the same reason I only use small teardrop buoys, which, together with a thin rope, prevent my pots from ‘walking’ in big swells. These buoys have a built-in hole through which I thread the rope, which has a medium-sized ‘shark clip’ and a small sinker tied on the end. This enables me to adjust the rope to the water depth, while the sinker ensures no rope lies close to the surface to get cut by boat propellers.

If not done right, cray-potting can be a dangerous practice for the unprepared. Here is a routine that has worked for me in hundreds of sets and often difficult sea conditions.

Before launching, check each pot’s ropes for tangles and feed them into the pot starting from the bridle end. I keep the buoy outside to prevent any tangles with the coiled rope as the kayak pitches on the way out.

Once I have reached the chosen spot on the reef, I store the paddle and put the buoy into the water first, then carefully feed all the rope into the drift.

Only when all the rope is out do I lift the pot overboard and carefully ease it to the bottom. This ensures the pot will be sitting the right way up.

I note the position of the buoy in relation to any nearby landmarks or on my GPS. This makes finding it in heavy seas that much easier.

I always approach the buoy from the downwind side, making sure it is rubbing along the left side of my kayak before grabbing it with one hand and holding on. Depending on the strength of the wind, I might make a couple of sweep strokes to position the kayak so that it is broadside and downwind of the pot. This ensures I can pull the pot from the upwind side of the hull, as this steadies the kayak in strong winds. Only when I have manoeuvred the kayak into that position, do I store the paddle in the right paddle holder with my other hand. To do so easily with one hand, I had to lengthen the shock cord on my paddle holder.

I can now carefully pull myself towards the pot, remaining vigilant and ready to slip some rope when a big swell lifts the kayak. To avoid having rope floating near the kayak or lying in my lap, I throw the buoy upwind to keep the loose rope out of the way. Eventually the pot comes clear of the bottom and can be hauled up. As I do that, I repeatedly throw any hauled rope upwind away from where the pot will come up. I take particular care not to have loose rope in the kayak.

With a bit of experience one can tell by the weight if the pot is empty or has something inside – exactly what that is comes clear once the pot is sighted. Most often one can see frantic crays shooting around, but occasionally the promising weight is nothing more than a great big octopus that has already made short work of the only cray that had entered the pot.

I usually lean a bit to the other side to counterbalance the additional weight as I slide the pot up over the side and onto my legs. Big males can take a bit of extracting from the pot before being placed into the bin behind me. Occies waste little time vacating their confinement, and literally ooze out between the wires. However, I have also collected some for a friend, who uses the tentacles as bait when stray-lining for big snapper. This involves pinning them with the gaff once most of their body is out of the pot and hanging on like hell, all the while dealing to them with the knife. It’s not a very sporting endeavour, but it’s the only way to kill an occy in the confines of a kayak.

The empty pot can either be re-baited by lifting the lid off the bait cage, or secured on the deck if wanting to bring it in.

Unfortunately, even among fishermen, there are those who look for easy pickings by lifting someone else’s pots. One can tell if pots have been lifted as they will not be on the GPS mark any more. For this reason, potters check them early – often just after daybreak, but even then pre-dawn raiders can get there first. Occasionally pots get stolen, too. I lost a couple a few years back off New Plymouth, and could not believe it when a friend rang me saying a buoy with my name melted into the plastic was found at Mahia Peninsula, south of Gisborne. I doubt that it had drifted there all the way around Cape Reinga. More likely, it and the rest of the pots had travelled overland in some scumbag’s car.

The secret to safe cray-potting is to develop a work routine for your particular circumstances that avoids unnecessary risks. If starting out, do a few dummy pulls in calm condition to get familiar with how it works. Always make a realistic assessment of the weather and sea conditions before heading out to check your pots. Don’t just rely on a regional marine forecast issued from a distant meteorological office several hours earlier. If in doubt, don’t go out. Valuable as the crays may be, they are not worth risking your life. Flag the trip and try again when the conditions are more benign – the pots won’t be going anywhere, and with a bit of luck one or two crays might still be inside. 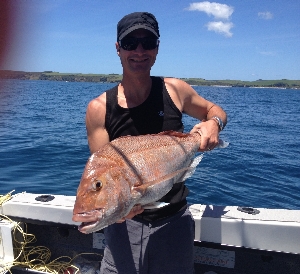