One of my principal rules for kayak fishing is to only take what I need.

There are two good reasons why. The most obvious is lack of space, followed by the painful realisation that ‘rust never sleeps’. If I can simplify essential equipment, then I feel I’m really on a winner. This philosophy contrasts starkly with that of the ‘just in case’ advocates, who carry a small forest of rods and a tackle box full of hooks, lures and other corrosion-prone bits and pieces, many of which quietly rust away before seeing any action.

A list of essential equipment depends not only on the types of fish I am after, but also on the methods I use to catch them. One key item is an anchor and a foolproof system to deploy it. I know that many soft-plastic fishers use a drogue instead of an anchor, but that does not mean an anchor is unnecessary, even if it is only carried as a safety backstop. Just think about it: no self-respecting boatie would venture out there without an anchor and knowing how to set it.

My anchor system is not only extremely simple, it is also very cheap. Let’s look at the individual components and their uses.

At the kayak end 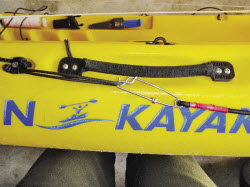 First I dispensed with the conventional ‘running rig’ because I always anchor from the back to keep a large forward arc clear for fishing. This directly points the well-rockered stern of my Prowler 13 into any oncoming waves for a clean lift. Some kayakers anchor off the bow for the same reason, but then risk having their fish wrap around the anchor line when fishing. My anchor-line attachment point is a shark clip at the end of two metres of 8mm thick bungy cord permanently secured to a saddle at the stern. That’s all there is to it and, as a bonus, it comes in at a tenth the price of a commercial running rig. When not in use, the bungy is clipped on a little loop next to my midships carry-handle.

I also attach my drogue to the bungy when drifting with soft-plastics, and haul it back with the ripcord.

Like nearly everybody else, I used to use a 4mm rope that took up lots of space on my winder. Now I use a braided 3mm Polyblend line by Bridon Twines costing $21 for 250m. I can accommodate well over 100m on my winder, allowing me to anchor in 60m or more without running out of line. Best of all, I can still pull the thinner line without hurting my hands.

I cut my winder out of 50mm thick, brightly coloured, closed-cell foam that floats. This means I can ditch the lot in an emergency (such as the time a newbie I took out capsized into the freezing water), or if I need to follow a strong fish. When anchored, I keep the winder attached to one of my seat straps with a smaller shark clip.

The weight of the chain helps to keep the anchor at a shallow angle, giving the blades a chance to dig deep for a maximum hold. This is particularly important when anchoring on sand or mud. I use about two metres of light galvanised chain, and have found this length works well without being unnecessarily heavy to pull up from deeper water. The line is tied directly to the chain, which has a stainless steel oval ring with a screw closure gate at the anchor end so I can change anchors quickly. I use two types of anchor: a 1.5kg folding-blade anchor for sand and a simple grapnel anchor for foul ground. In strong wind/current conditions, which we often face on the west coast, I have found that the 1.5kg folding-blade anchor is the minimum weight required to securely hold my kayak. Its smaller/lighter version lacks sufficient grip. Since it’s always possible to inadvertently snag on a reef, I attach the chain at the front rather than to the shank, then run the chain back up the shank and secure it at the end of the shank with a 2mm x 100mm cable tie. It is important that this part of the chain is slack so that the weight of the kayak is borne by the thin cable tie rather than the chain. If the anchor snags, a good pull breaks the thin cable tie and, most of the time, the anchor can be pulled out by the head.

If I intend to anchor on reefs, I use a DIY grapnel with four Number 8 wire prongs protruding from a piece of 200mm x 25mm galvanised water pipe. The prongs need to be long enough to not only hold, but also bend open when you want to break out a snagged anchor. Beware of some of the small commercial grapnels, as some have prongs too thick to bend open with the limited force you can apply from a kayak. Number 8 wire seems about right.

After getting the anchor ready, I drop it by unwinding the line until it hits the bottom. I then let nearly as much slack line out again to give myself a shallow angle (enough scope) so the impact of big west coast swells are reduced. After that I wrap the line twice around my opened shark clip on the bungy, which prevents the 3mm line from slipping. With the line now firmly clipped on, I pay out more line until the bungy takes all the strain and acts like a shock absorber when the big swells roll up behind me. It removes the need for a conventional buoy, which also acts like a shock absorber. I have never been jerked by a sudden impact – and believe me, where I fish we get swells of four metres or more.

Retrieving an anchor can be quite dangerous, even if not stuck fast. I begin this manoeuvre by pulling on the anchor line coming off the winder until I pull up the bungy shark clip, which I take off and store. Because the kayak is hauled sideways towards the anchor, care has to be taken not to overturn the kayak in strong winds and oncoming waves.

When I am nearly over the anchor I try to break it out, always ready to let line slip should a big swell begin its lift. Then, once the anchor is free, I pull it up and store it as quickly as possible. While pulling, I always spill the recovered line into the water to avoid any possibility of entanglement from all the line draped over my lap. Consequently, as the wind pushes the kayak away, the slack line begins to drag behind the kayak and can be put on the winder at my leisure. My considered advice is to not directly wind up the anchor onto the winder. This is not only hard work, but also a recipe to terminally snag a dragging anchor.

However, despite all the best practice, every now and then an anchor cannot be freed, no matter how hard you pull from every direction. Cutting the line is the only option and probably the safest one, too.

Over the years I have spent a lot of time on the water, and have seen some hilarious anchoring manoeuvres with makeshift equipment by people who really did not know that in kayak fishing the margin for error is very narrow indeed. So, considering that dropping and retrieving an anchor is one of the basic kayak fishing operations, getting both the equipment and its use right is one of the markers on the road to becoming a competent kayak fisher. There really are no shortcuts.