How to troll for snapper

In its most simple form, trolling is just dragging a lure or bait behind the boat. Anglers chasing pelagic gamefish know of the value of trolling and, in most cases, it is the go-to technique. The main advantages of trolling are that you are able to cover a lot of water quite quickly and keep your lure or bait in the right zones for long periods of time. Most recreational anglers tend to only fall back on trolling techniques when there are obvious signs of fish feeding near the surface.

But trolling has another side that is not publicised much and it may be that canny anglers are keeping their secrets to themselves. Approached in the right way with the right techniques, trolling can prove successful for many species of fish. Over the years I have had a lot of success trolling for snapper, for example. Some of the early catches were unexpected, but now we are actively targeting snapper on the troll. It is no doubt a productive and fun way to fish.

Start talking to your fishing mates and I guarantee one has a story about accidentally catching a snapper on the troll.

Snapper are well-known lure takers that often feed close to the sea bed. What a lot of anglers don’t realise is that snapper are also very aggressive predators that will, in the right situations, feed very close to the surface and attack large prey. The best areas to target snapper while trolling vary. Fishing structure such as reefs and areas with good wash can be productive, as can any area where there is a large amount of bait fish. The other spots that can work well if you use a deeper diving lure are along sandy beaches or estuaries where you can fish without too much worry about snagging up. 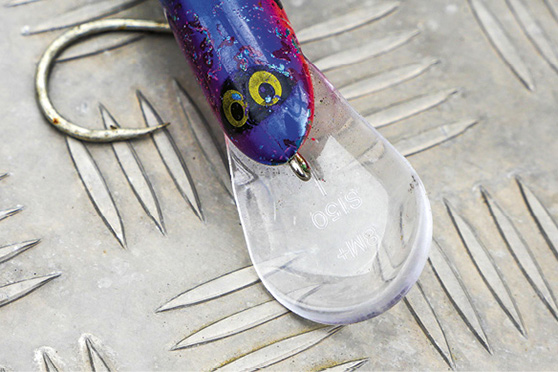 The main way to troll for snapper is by using something that will take your line to a set depth and keep it there. Downriggers are perfect for this and using them has really opened up my eyes to how high in the water column snapper will feed. Downriggers are great because they allow you to set your rod under load so that strikes are easily seen. They also use a release clip so that you fight the fish with no encumbrance on the line. The other way to control your depth is with a paravane or diving board that can be set at a certain depth. The only draw-back to paravanes is that they are attached to your line, making the rig a bit cumbersome.

When trolling for snapper, use a rod of two metres-plus with a soft tip and powerful butt section, and a reel with 8-10kg braid. I like to rig smaller lures and baits on 15 kg trace and heavier gear on 25kg trace (both usually two metres long). When deploying your offering, set two to four rods out at different depths and run them between 20 and 50 metres behind the boat. Using your sounder and chart plotter to work contours and avoid snags is important.

Depth control of your gear is one of the keys to constant success when snapper trolling and, as mentioned, this can mean keeping your lure anywhere between the seabed and mid water. When fishing sandy areas, it is best to use a deep diving lure that will swim from four to six-plus metres. The size of lure will vary between locations. In estuaries, I would go for a 10-14cm lure; if fishing off an ocean beach, 14-18cm lures work great. You want to troll these lures so that they are touching the bottom occasionally at around 3-5 knots. It pays to rig them on strong terminal tackle as they could also get crunched by kingfish. Soft-baits can also be used for trolling. The trick is using heavier than normal heads to keep the lure deeper in the water column. Slow trolling a soft-bait around reefs or through fish holding channels will produce a lot of snapper. This technique works really well when there are large numbers of smaller bait fish schooling, like whitebait or anchovies. 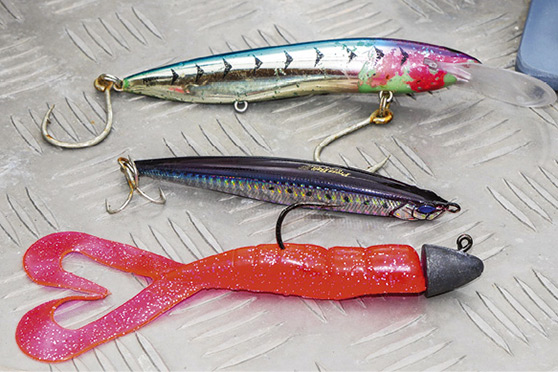 A selection of proven snapper trolling lures that operate at different depths and speeds.

While using lures is very effective when fishing around sandy areas, the use of live and dead bait can be effective when trolling around structure and bait schools. To give you an idea of how snapper feed, a recent catch saw a 7kg snapper eat a large live bait set at 18 metres where the bottom depth was 30 metres plus. It is best to troll live and dead baits at a slower speed in the two to four knot range. This is mainly to help the bait swim as the snapper can catch them at much faster speeds. The best baits for trolling for snapper are live piper, koheru, slimeys, jack mackerel and squid. The top dead baits are fresh piper or frozen slimy mackerel (if they are good quality).

When rigging for live bait and dead bait trolling, use a similar trace set-up to lure fishing, except change the lure for a 6/0 to 10/0 circle hook. Live baits are generally hooked through the nose or up through the lips, so they troll straight without spinning. Dead baits are hooked in the same way, although the addition of a stinger hook on a short trace helps with hook-ups.

Use 6/0-10/0 hooks and 15-24kg trace for trolling rigs. Hook live and dead baits through the nose so they don't spin. Put a stinger hook in the tail of dead baits for more hookups.

Once you have set your lines out, the next part of the equation is the strike. A strike on a lure will be positive and an instant hook up will occur. As such, set your drags so they will not rip the lips off the snapper when they bite. When using live and dead baits, the strike is really aggressive and sometimes the snapper will miss on the first go and have a second or third attempt. This is when you have to react quickly. If you see a bite on your rod tip with no hook up, quickly drop your bait back further by free-spooling. The snapper will often come and finish off the bait. 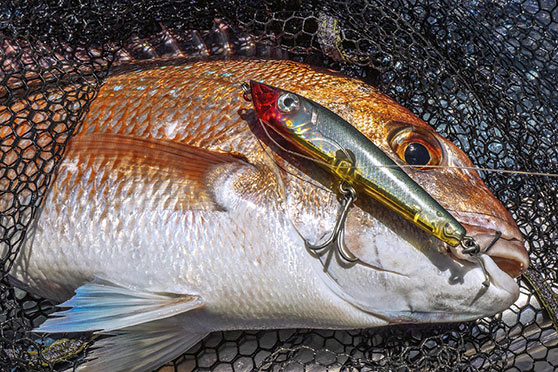 The size of fish will vary but most are keepers.

Trolling for snapper works on all sizes of fish, from schoolies to moochers. You can troll from a small tinny or kayak, right through to a launch. It is a technique that, once tested, will surprise you with how effective it can be. Trolling for snapper is a good way to prospect and when you find consistent bites in certain areas you can pick up a feed in no time.