How to Target the Lesser-Known NZ Fish

Glancing through the pages of this fine magazine, you could easily be forgiven for thinking we only catch three or four species of fish in New Zealand. Indeed, for many anglers, ‘If it’s not red and the name doesn’t start with ‘s’, it’s not worth fishing for,’ suggests John Eichelsheim.

Nearly all the recreational fishing effort in this country is expended on a few species. Snapper, kingfish, kahawai and blue cod lead the list, with tarakihi and hapuku/bass taking up the rear. In freshwater, it’s trout and salmon or nothing.

Fine sport and table fish like trevally, moki, trumpeter and warehou are either ignored or have only regional importance. Big game species like marlin and tuna are high status, glamour catches, but remain the preserve of a relatively small group of elite anglers with the time and money to chase them.

We have over 1000 species of marine fish in New Zealand, which would suggest there are hundreds of potential angling opportunities, but our strong focus on just a few popular species means the rest receive little or no attention.

A few, like flatfish, and to a lesser extent grey mullet and butterfish, are the target of limited amateur net-fishing, but most are virtually ignored by line fishers. Some are taken accidentally while fishing for more popular fish, but are seldom targeted on purpose: pink and blue maomao, various labrids and wrasses, pigfish, boarfish, leatherjackets, jock stewarts, scorpion fishes, morid cods, ling, marine eels, frost fish and many, many more. Why? Perhaps because they are considered too small, too big, too ugly, too strange or they have spines, teeth, slimy skin and other undesirable attributes. 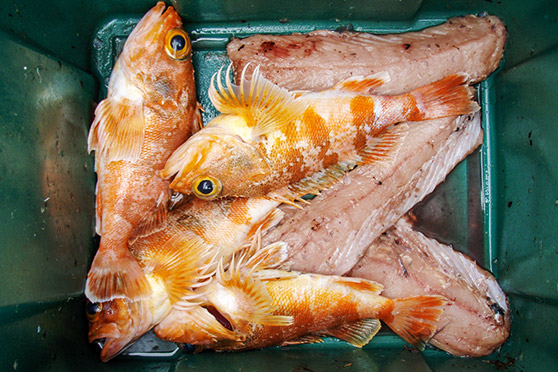 Jock Stewarts are easy to catch on cut bait and are good tucker. Pink maomao are fun to catch and good table fare too.

These fishes are generally considered ‘nuisance’ species. A few, like blind eels, really are nuisances – catching one can ruin your day, along with your terminal tackle – but most are harmless and can be interesting to catch.

Quite a few fishes are relegated to the ‘bait’ category – worth pursuing only as a means to catching species we value more highly. There are dozens of fishes in this category, including jack and slimy mackerel, koheru, pilchards, anchovies, yellow-eyed and grey mullet, skipjack tuna, barracouta – even kahawai and trevally, though their stars have risen in recent years with many now kept for the table.

Most of the fish types listed above, and heaps of others too, are actually worthwhile angling targets. The majority are perfectly edible – some are great eating – and many are excellent sport fish as well.

So, prejudice aside, why don’t we expend more effort trying to catch other species?

I think anglers in general are somewhat conservative and therefore reluctant to try different techniques, baits and tackle. Certainly, people are wary of culinary experimentation, so an unfamiliar fish may hold little appeal.

But targeting something different can really expand your fishing horizons. I love figuring out ways to catch different species and fishing in exotic overseas locations where virtually all the fish are completely different. At home I enjoy the challenge of catching specific fish on purpose rather than by accident.

I’ve become reasonably adept at catching parore, for instance, by adopting light tackle float-fishing techniques popular in Australia where this species is well regarded by anglers.

Over the years, I also found ways to reliably target kelp-loving fish such as banded wrasse by light tackle stray-lining or float fishing with small crabs for bait. There have been some interesting by-catches using this method, including butterfish and marble fish, which – like banded wrasse – pull really hard as they dash around in the surge zone seeking refuge in deep holes and gutters.

There are lots of fishing candidates for the keen Kiwi sport fisher willing to experiment. Some, like flounder, mullet, butterfish, mackerel, ground sharks, wrasses and parore are abundant, if not always easy to catch; others like bluefish and silver drummer are harder to find, a particular challenge to hook, and an even bigger challenge to land.

But there are ways to catch nearly all of them on a line. Perhaps the most difficult are the vegetarian species, because they don’t usually respond to the flesh baits we anglers usually employ.

Parore respond well to baits of filamentous green algae. In Australia, this bait is also used to target silver drummer, a rocky shore species that is also relatively common in northern New Zealand. Silver drummer is a relative of parore, but much larger and more powerful. Although vegetarian, both species will sometimes bite shellfish or crab baits. 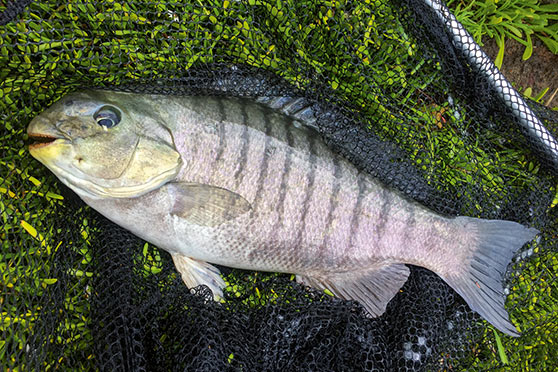 Parore is common around northern New Zealand, but seldom an angling target.

This fishing style is quite labour intensive (lots of effort tying up the rigs, weighting the line correctly, sourcing, mixing and dispensing the berley, sourcing suitable bait and accessing suitable rocky shore fishing platforms) and the gear isn’t easy to find in New Zealand. A couple of fishing stores in Auckland catering primarily to the Asian community stock Iso fishing gear, but it can be purchased online easily enough. There’s plenty of Iso fishing advice, knots, rigs, tackle choice etc. available online too.

Iso fishing targets a whole raft of coastal fish species Kiwi anglers haven’t traditionally fished for. It is a highly effective shore-based technique that works equally well for common species, including snapper, trevally, kahawai and kingfish, but the tackle and techniques will be quite unfamiliar for most Kiwi anglers, so there’s plenty of learning to do.

It’s quite possible to target ‘exotic’ fish without resorting to expensive specialised gear by simply adapting what you’ve already got and changing your fishing approach.

Something as basic as down-sizing baits and rigs could see you hooking all sorts of fish you wouldn’t normally catch. Changing where you fish – or when – can also make a difference. Some fish are only present in a given location for a certain phase of the tide, or else only bite in low light or under the cover of darkness.

Flounder are usually netted or speared – spearing flounder at night under torchlight is a popular pastime, but they can be caught easily enough on a line. Use light tackle with very small hooks and small baits of whole crab, marine worm or earthworm. Fishing these baits in the shallow water of estuaries on a rising tide works really well, especially at dawn or dusk.

Other ways include fly-fishing with shrimp or crab imitation flies, or using ultra-light spinning tackle and really small soft-plastics. If the water is reasonably clear, you can often spot flounders in a few inches of water as they move onto the flats with the rising tide, picking off small crabs and other invertebrates as they go. Casting your fly or soft-plastic in front of them and twitching it often results in the flounder pouncing on it in a rush. It’s fun, visual fishing and sometimes you don’t even get your feet wet.

Species like maomao, red snapper, butterfly perch and several other northern reef species are actually quite easy to catch if you use small baits on relatively small hooks.

Small baits are the key to success with tarakihi, too, with shellfish baits working particularly well. Downsizing terminal tackle and using smaller baits can really up the catch rate on trevally.

Anglers can target trevally by fishing around reefs, islands, rocky outcrops and manmade structures using unweighted baits of shellfish. They’ll bite pilchard and squid baits too. Fishing can be very good in winter when schools of trevally take up residence under wharves and similar structures inside northern harbours. Year round, micro-jigs and small soft-plastics also catch plenty of trevally.

Shellfish baits are excellent for many reef species. Salted tuatua is a great all-round bait, but don’t be afraid to experiment with ‘unusual’ baits if you are seeking unusual catches. Crayfish tail is a favourite bait for blue moki, for instance. 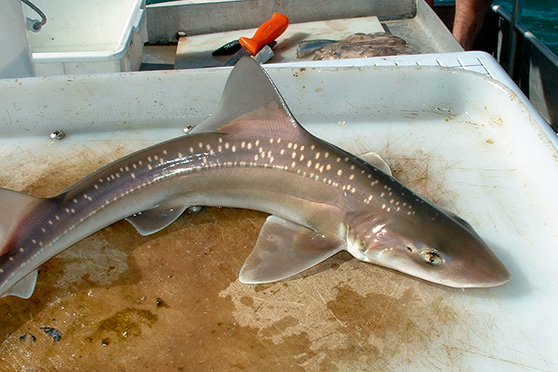 Spotted smooth hounds prefer baits of shellfish. They fight hard, grow quite large and are excellent eating, yet they are seldom fished for.

Fresh and frozen prawns in a range of sizes, whether sold whole, as cutlets or as ‘prawn meat’, are readily available and make good bait for many species. But bait gathered near where you are fishing can also work well: small crabs found under rocks, rag worms and other beach worms, mussels, pipi, tuatua – even large sand hoppers/sand fleas.

Try fishing a few different baits in places you might not normally fish – a deep gutter between rock ledges, for instance, or a whitewater surge zone. Downsize your terminal tackle and go as light as you dare to get bites from shy species, or drop small and/or unusual baits into deep water. Try float-fishing or give algae baits a go for parore and drummer – they’re lots of fun to catch.

By changing your approach, you could open up a whole new world of fishing. A bit of variety keeps fishing interesting and figuring out how to catch different species is surprisingly satisfying, almost addictive.

The remoteness of the Mainland's West Coast has ensured its rivers and lakes have remained both productive and pristine, offering plenty of ... more >

Mainland angler Dylan Booth shares some of his best memories from fishing his local water – the Taieri River.... more >

Sam Mossman reviews the FC 465 CC, and has no complaints. Fish City have produced another fine boat which is perfect for inshore fishing.... more >

Herb Spannagl investigates the effects of UV on trout lures, and concludes that adding a UV coating to lures can be an effective way to catc... more > 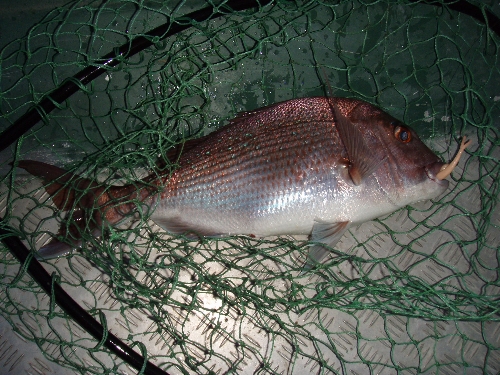 Another nice pannie falls to a soft bait - Mangawhai