How to make your own surfcasting rigs and traces 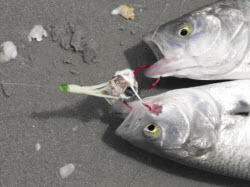 There’s a lot to be gained from making your own surfcasting rigs and traces.

Apart from the obvious benefit of saving a lot of hard-earned cash, the satisfaction of catching a fish on something you’ve made is almost immeasurable.

Most tackle shops are awake to the fact that eventually most surfcasters will want to make their own rigs and traces, so stock their shelves accordingly. They now have rows and rows of all sorts of clips, attractors, beads, flashers, floats and tubing. So much so that they sometimes look more like a lolly shop than a tackle store. It is those ‘lollies’ that not only make a big difference to your wallet, but also make all the difference to your catch rate if used properly.

My intent is to discuss simple and more complicated rigs and traces and how they can be made. I figure that, as they’ve made a big difference to my fishing, they may just do the same for you.

The first rule to remember is that there are no hard, fast rules to making rigs and traces. The same as many things in this life, some anglers like them long and some like them short. Find out what works for you and adapt what you see here to suit.

Rather than give you measurements for every rig, you only need to know the diagrams have a trace length of my preferred size of 600mm, because I think anyone would be pleased with one 600mm long. The rest of the measurements relate to that.

Used by many surfcasters, this rig is said to allow the fish to run off with the bait and not feel any resistance. I have my doubts about this. Sure, the fish won’t feel the weight of the sinker, but it will feel the resistance caused by your drag setting.

Just how much is easy to determine. Cast your line down the beach and then set your normal drag pressure. Now place the rod in your beach spike and wander down to your sinker. Next pick up the sinker and briskly walk off with it. Watch your rod pull down as if it has a fish on, and feel the resistance through the line. This is what any fish will feel.

Having said that, many good fish have been caught on running rigs, so now I’ll show you how I make mine. Bear in mind that I use 60lb Black Magic Supple mono for my traces.

Looking at Diagram 1, the first step is to pass your shock leader through the eye of your sinker. Next, tie on a decent swivel that’s big enough to prevent the sinker eye passing over it. Next, I clip my trace to the other end of the swivel, and that’s the running rig completed. I clip almost all my traces to my rigs, as this allows quick bait changes.

However, while the running rig is a good fish catcher, it’s a real shocker when it comes to casting distances, as the trace ‘helicopters’, robbing many metres from what would otherwise have been a good cast. Keep this rig for short to medium distances.

The Ninety Mile Rig is very similar to the running rig. The only difference is that a length of mono is tied between the sinker and a swivel that is free-running on the shock leader (see Diagram 2). This rig has all the benefits of the running rig, but casts considerably better.

The sinker swivel is first tied to the shock leader, and then the shock leader is tied to another swivel. Your trace, same as in the running rig, is clipped onto the second swivel.

I also clip my sinker line to the sinker swivel. This way I can change sinkers quickly, too. Being able to change things quickly can make all the difference in a competition situation where maximum soak time means more success. This rig may have other names, but I call it The Ninety Mile Rig, because that’s where I first saw it in use.

As I said before, I like my traces to be about 600mm long. This length allows plenty of movement in the water, yet it’s easily manageable when casting. Best of all, it seldom gets tangled around the sinker.

The simplest trace you can make is one where you have a hook on one end and a Genie Link Clip on the other. The Genie Clip allows you to quickly change baits.

The biggest benefit comes when I’m into a hot bite session: I can unclip the trace and fish and leave them on the beach while I clip on a new baited trace. I can then get the new bait out before dealing with the hooked fish lying on the beach.

To be able to do this, I have half a dozen traces already baited up and ready to go. I can have them soaking in fish oil while waiting to be used – a real bonus. Better still, these days I have them sitting in Secret Sauce – and boy, does that stuff work or what! 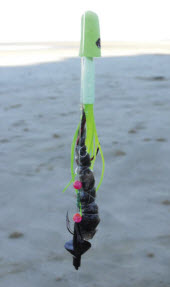 A few years ago I was fishing out at Ocean Beach, just south of Napier. I had taken out a guy who was new to surfcasting and hadn’t yet been won over by the clip-on system. All was quiet – until a school of two- to three-kilo snapper moved in. Then things got rather hectic, to say the least. I could only deal with one rod, as there were only seconds to wait for a bite once a fresh bait hit the water. But because I was able to change baits quickly, whereas my companion had to tie on new ones, my tally for that hectic session was seven fish to his two.

Another way to vastly increase your catch rate is to add brightly coloured or silver attractors to the trace. If you head in that direction, you’ll be amazed at what’s available and the difference it makes.

Things like coloured floats, beads, tubing, flasher material and artificial imitations will soon fill your tackle box. Look for bright fluoro and lumo colours. I use fluoro and silver during the day and lumo at night.

Keep on experimenting with different colours and combinations; you may eventually come across something fish find totally irresistible, then you can come and show me and we can both keep it secret (nod, nod, wink wink!).