How to land fish without a net or gaff

We’ve all done it. Maybe these vital tools were left behind because we headed off too early in the morning or we were in too much of a rush. Or maybe the net/gaff had fallen into disrepair but not been replaced. Maybe a lack of storage space made carrying such items difficult or impossible. Perhaps the area being fished had never before produced anything large enough to require a net or gaff.

As you can see, there are many reasons we find ourselves unprepared to tackle the occasional unexpected monster, but, fortunately for us, a variety of tactics can be employed to turn those unexpected challenges into triumphs.

It’s not surprising to find landbased anglers without the necessary tools to land big fish since most must physically carry every item of tackle to the fishing spot. That’s always a motivation to keep equipment to a minimum, and most land-based fishers encounter fish of modest size. This level of unpreparedness frequently results in big fish being lost as panicked anglers try to lift their prized catch onto dry land.

Beach monsters: When surfcasters find themselves hooked to something large, whether it’s a kingfish, a shark, snapper or a ray, it’s firstly important to stay as close as possible to the fish, following it along the beach if necessary to keep line angles to a minimum.

When the fish is brought closer into the surf zone, a choice must be made regarding which swells might be helpful to your cause and which might be detrimental. Big swells can pick up a fish and dump it further up the beach, landing the fish for you. But the bigger the swells are, the higher the risk of the hook falling out as the fish tumbles inshore.

Smaller swells provide less assistance to the angler, but are safer, allowing fishers to wind in quickly and maintain pressure as the wave washes up the beach. An angler needs to hold on as hard as he or she dares when the wave recedes until the next wave takes over and starts pushing in again. Patience is key here – the idea is to eventually strand the fish on the sand, whereupon someone can rush down, grab the fish and haul it up higher up the beach to safety.

Really big rays and sharks will probably need to be dealt with in the shallows – ideally, they should be unhooked, although sometimes it is safer to cut the line close to the mouth before the fish is allowed to swim or wash back out to sea. Please don’t kill or mutilate rays by removing their tails, just because ‘they took up your time’! It still happens!

Rock monsters: The chances of hooking something big off the rocks is greater than when fishing from the beach, but often punishing walks in, not to mention possible scary climbs, encourages anglers to carry the bare minimum of gear, so gaffs are often left behind.

Some fishers use such heavy tackle from the rocks – traces especially – that, provided the fish is well hooked and/or isn’t too big, not having a gaff is barely a disadvantage. They simply grab the trace and lift the fish onto the rocks.

But for those using lighter tackle and a more subtle presentation to trick some of the older, bigger rocky shore denizens into biting, this is not an option. Instead, with a bit of patience and assistance from a helpful swell, anglers slide their fish onto a ledge, outcrop or into a gutter, so it becomes stranded when the wave recedes.

Wharf monsters: I encountered more than my share of large fish, mostly kingfish, over many years of wharf fishing. Long-handled gaffs did the job nicely in this situation, but too often they were not present when needed, and a shorter-handled gaff would have to be deployed instead. This saw the gaffer clambering down a rusty ladder or suspended from dodgy handholds to nail the fish, before passing the gaff with fish attached up to eager hands waiting above.

Having no gaff at all saw larger kings walked along to a more angler-accessible position – perhaps some boat-boarding stairs or a lower platform, or even all the way back to the shore where someone waited to grab them by hand in the gills or by the tail.

I once managed to lift a big kingfish up onto a Wellington wharf with the assistance of fellow ‘wharf rats’. We jagged it along the body with heavy-duty treble hooks tied to thick nylon lines and then pulled it up together!

Although there’s not really an excuse for not having a decent net and gaff on board a boat, especially larger vessels, lack of experience, maintenance or forgetfulness can mean having to explore other options.

Biggies on bait: Like those anglers fishing from the rocks, some fishers use such heavy gear they can lift their trophy on board using the trace. However, a combination of powerful, crushing teeth (i.e. big snapper) and old knots (they lose breaking strain with time and use) makes this very risky.

By all means, use that thick trace to your advantage, but gain some valuable insurance by also grabbing the fish’s tail or sliding your hand up into the gills. If it’s a kingfish, a ‘thumb lock’ on the lower jaw works well, but you do need reasonably strong fingers if they start thrashing around. High gunwales can make reaching your fish problematic, so maybe there’s a duckboard you can use, letting swells help you slide the fish onto it for easier access. 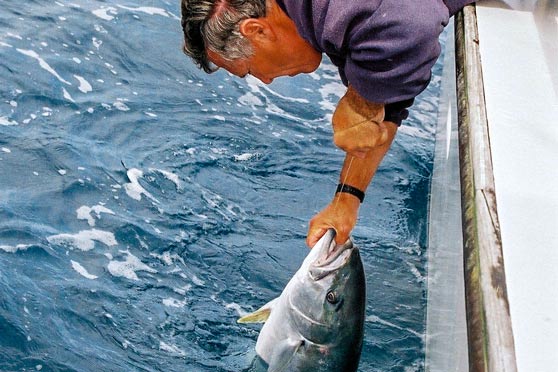 Really large fish might be secured by tying a rope noose around the angler’s line, dropping it down over the head and then tightening up around the gill area. If you can reach the tail, that’s a good place to secure a rope as well.

Biggies on lures: Fishing with lures can be an advantage when that larger fish comes along, with the lure itself providing something with which to lift a fish. For example, large knife jigs used for kingfish have very strong assist rigs that allow anglers to grab the lure to lift the fish on board. Best to also grab the tail for extra insurance.

If it’s a ‘puka or bass on the line, it’s possible to slide your fingers into the gills and find the convenient ‘pocket’ inside the gill covers, but if you don’t know where it is, it can be hard to find.

Inchiku lures can also be used to assist with landing fish. The centrally located assist-hook rigs allow them to be grabbed horizontally, with the angler’s fingers to either side of the hooks, before lifting the fish over. This strategy does have its limitations though, especially if the fish is particularly big and/or the assist cord or hooks have been well used. Again, if in doubt, hold another part of the fish with your other hand, ideally the tail or up in the gills. 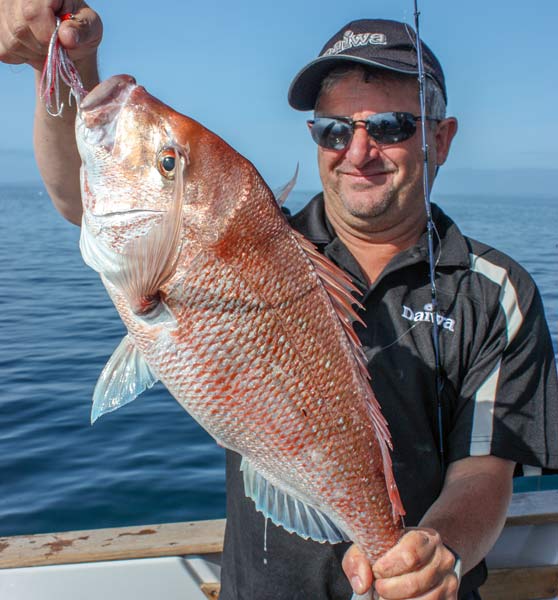 The lead-heads used in softbaiting are also useful for lifting fish aboard, although the heavier/ bigger the lead-head, the better the grip provided – and I wouldn’t like to lift any fish over five or six kilos on board without holding another part of its body with my other hand.

Another thing to be wary off is those nasty snapper chompers – they are incredibly powerful and can really hurt, so make sure you hold the jig head at an angle that keeps your fingers out of danger!