How to Fish Lake Tutira

Gary Kemsley shares the intricacies of one of his favourite lakes, Hawkes Bay’s Lake Tutira.

Lakes can be desirable for many reasons, and foremost for fishermen is the big fish they produce. In my youth, Lake Tarawera was such a place. The trout (all rainbows) averaged about 3.2kg and every day in the latter part of the season someone caught a 4.5kg+ fish. It was great, but far from attractive otherwise. We waded in at the carpark before dark at night and fished in sub-zero temperatures, with the line icing up in the rods and the reels literally freezing solid. We didn’t care. It was all about catching big fish – and that we did. 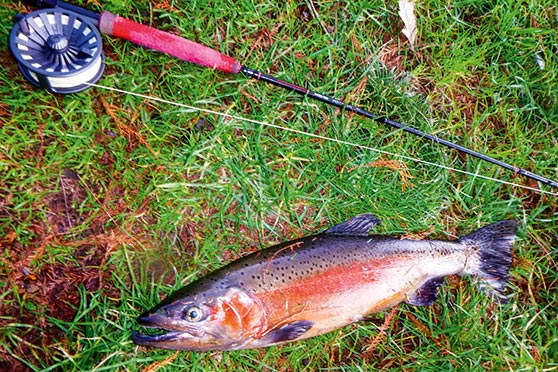 These days I have taken a liking to smaller waters, lakes like Otamangakau, Rerewhakiatu, Okaro and of special interest, Lake Tutira in Hawke’s Bay. It’s close to home and I can say that I caught my first trout there back in the 1960’s, nearly 50 years ago! It has always been one of my favourite waters.

The lake is small compared to many lakes in the North Island, but its four-kilometre length and one kilometre width is big enough to raise a good chop on the surface when the wind is blowing from the north or south. Its total area of 500 acres is a wildlife reserve. No powered boats are allowed on the lake and there is no shooting at any time.

The reserve status means that anglers will likely encounter a number of native species here that may not be seen elsewhere. I love the tuis that feed on the flax seeds, which just stay still enough for a quick photo before flitting off to the next flax bush. Black swans and a number of waterfowl species are present. The dabchicks often fool anglers into thinking they have seen a rising fish nearby. They stay down long enough for the angler to believe it couldn’t have been a bird then they pop to the surface to spoil the dream.

Night fishing is good but can put you in a dangerous situation when a squadron of large black swans come in to land under cover of darkness.

I am not so enamoured by the eels in the lake either. Some evenings they invade the shallows, sucking on the surface and swirling like huge brown trout. I caught one in the dark one night. I thought I had hooked a good-sized rainbow jack by the way it played but when I put my light on it back at the beach, I was not happy. I went home.

Night fishing can be fast and furious. The limit bag, if you wish to take it, is four fish. That can be achieved in four casts some nights. Other times they will splash about and keep you there for hours and never take your fly.

The fishing is seasonal and changes through the year. The best results come when spawning rainbows return to the places where they were released. There, they mill around in the shallows and try to spawn by digging redds and dropping their eggs.

The requirement for moving water over the eggs is absent, although people do try in the windy shallows where wave action could be useful.

Excellent fishing is available in the build-up to spawning season. The trout stay out in deeper water most of the time and jigging or harling from a small boat will catch you a few fish. These are usually very well-conditioned fish, often the best of the year. Spinning from shore at the deeper spots will be worthwhile before they turn up in the shallower spots.

Towards the beginning of May, sometimes later, the fish will show up in the shallows and they will be there until September. Fly fishers have a ball for a few months. The best technique is to drift nymphs with the wind. Patterns like March Brown and Pheasant Tail nymphs are good.

There will be times when a huge hatch of choronomids (midges) will get the trout’s attention and small sparse flies are required to imitate the ascending nymphs. By October, most fish are back in deeper water. There is good activity near the shore for a while as rainbows feed after the spawning event. Then, as surface temperatures rise, the rainbow trout drift off to deeper water.

Most anglers have given it up by the end of October, but they miss some classic fly fishing. Often in the weeks leading up to Christmas, you will have the place to yourself. It’s not the rainbows that are of interest now but rather the big browns that live in the lake. They stake out their territory and cruise their beats day in and day out. They can be hard to fool in the crystal-clear water, but you will see them. Some are huge, weighing over 4.5kg and even up to 5.5kg.

In the past there have been tiger trout (cross between brown and brook trout) released into Lake Tutira, but they have died out. Several were caught when they were around and they achieved acclaim by being very strong fighters.

Brook trout were the first trout to be released into the lake in the 1890’s by Guthrie Smith. They did not survive. The first successful reported releases were in the early 1920’s. These were both brown and rainbow trout. When I started fishing the lake, the Papariki Stream, known by most as Sandy Creek, flowed into the northern end of the lake. There was limited spawning water in the stream but the trout left the lake to run the gauntlet of flash floods, poachers and predatory birds, and if they made it to spawn, the fisheries staff would remove their eggs to the Napier Gamefarm.

The local landowners have since blocked all access to the northern end of the lake and blocked the mouth of Sandy Creek so that its meagre flow is directed into the Tutira Stream, which flows away from the lake and into the Waikoau River. Fish and Game, other authorities, angling clubs and private anglers had spent a lot of money and even more time beautifying the northern access to the lake, with the plantings of hundreds of native plants and trees. There was an all-weather access track and a nice picnic area on the lake shore. Now the access is closed. The owners say they are going to redirect the stream back into the lake (for cultural reasons). That was four or five years ago and there is no sign of activity there yet. 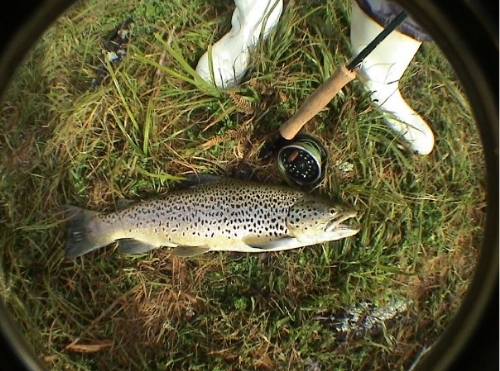