How to Fight Kingfish

Over a couple of cold bevvies, the discussion between NZ Fishing News Managing Editor Grant Dixon and Offshore Adventure’s Tony Orton turned to the ‘best way’ to tackle kingfish. The following are Tony’s thoughts on conquering kingfish…

GD: Is it a matter of ‘go hard or go home’ or ‘softly, softly, catches kingfish’?

TO: Every situation is different, and there are a lot of variables – tackle being fished, terrain and weather conditions. Most of our fishing for kingfish is done around the Mokohinau Islands and over some tough terrain, so it is normally a case of ‘go hard’ using top Shimano tackle designed to put the maximum hurt on a fish. Most often, we have clients on board who are after their personal best kingfish, and it is results that count. Even with the best gear, knots and will in the world, we still get beaten to the punch by some of the bigger, tougher fish.

Kingfish, as most anglers know, can be stubborn and just when you think you have one beat, it will gain a second wind in its bid for freedom.

Get into the fish early and be ready to react. Initially, you might think it is ‘only a rat’, and then it wakes up and nails the unsuspecting angler to the rail. Sometimes you can only hang on and trust that your knots, trace and line is good. 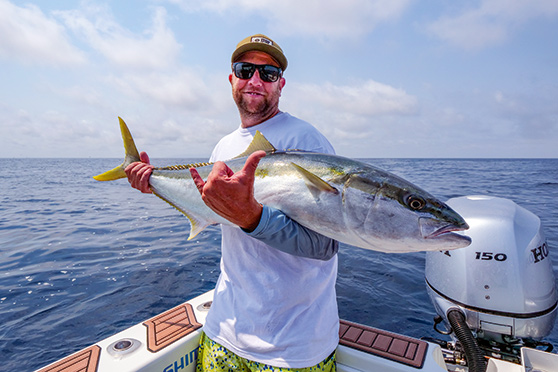 The rewards of a good angling effort.

GD: Is there a place for ‘softly-softly’?

TO: The only time we might drop the drag back is when we get into ‘trouble’ – the line gets caught around a cray pot, a fish heads under the boat, the fish takes the angler into the reef and you hope it will swim the line out, or two lines cross – otherwise it is up to the button or over it and going toe to toe with the fish.

You hear of people talking about ‘walking’ a fish out off the reefs into deeper, safer water and that is a tactic you might deploy using lighter line classes when fishing the likes of the Bay of Islands Yellowtail International using only lightly weighted or un-weighted live baits, but it rarely works for us fishing 37kg braid, 130lb trace and tackle to suit.

Once the fish comes up against the weight of the sinker, it is usually game on, and it will head straight for the nearest structure.

GD: How important is the boat work?

TO: We will either slow troll or fish livebaits on the drift (controlled by the MinnKota electric motor), but once we hook up, it is on with the big motors, and we chase the fish hard to stay on top of them. It is important to keep their heads up, keeping the line as short as possible. Playing a big kingfish is a bit like taking on a stubborn tuna or marlin when you run around it in tight circles, using the boat to confuse and keep the pressure on it.

The boat can also be used to work a fish away from the sanctuary of the foul bottom. Sometimes I will drive in front of a fish, cutting it off from its attempts to reach a shallow patch or rocks.

Once we have a fish off the bottom, we will often drop another bait down and resume fishing. Obviously, you need to take care not to tangle with the angler hooked up, but we find other kingfish will follow the hooked fish and another bait in the vicinity will attract their attention.

When on a big fish, smooth strokes of the rod to maintain constant pressure is the key, keeping the fish’s head up. Once you turn the fish, a steady approach tends not to spook them as you work them towards the surface. Don’t stop at the top of the rod lift. Keep the same pressure on by winding as you approach the top of the ‘swing’ and then continue winding as you lower the rod. All the work in gaining line is done on the rod drop.

Another good technique is to use the swell to lift the fish – as soon as the boat starts to drop down the other side, wind hard to keep the pressure on. It is a good technique to use for conserving the angler’s strength as minimal rod lift is required. 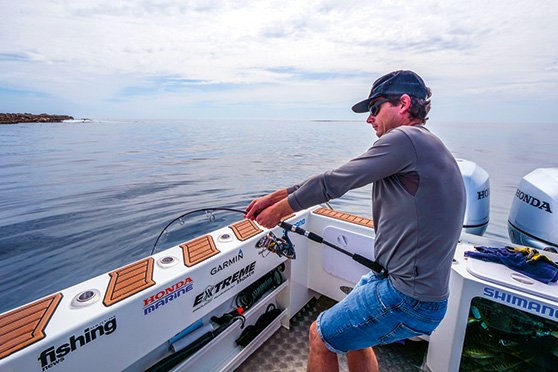 This kingfish was 'corralled' away from the rocks with some good boat work.

GD: Terminal tackle is important – it has to be light enough to allow the bait some freedom of movement and yet strong enough to withstand a tough fish or rubbing on the bottom. Your thoughts?

TO: I agree. As a rule of thumb, I use 100lb fluorocarbon trace, which is abrasion-resistant and strong but is also less obvious in the water. I prefer fluorocarbon trace for almost all my fishing, including soft-baiting for all the reasons outlined above.

For my mainline, I always use indicator braid. In this case, it is Shimano Kairiki 37kg which changes colour every 10 metres. This serves two purposes – the first and most important is I can get my anglers to drop their baits or jigs to the exact depth I am marking fish on the sounder; secondly, in a protracted fight the angler knows exactly where they are at and can be encouraged by any line gain, or simply know how much there is to go. Good communication between the angler and skipper is essential, and indicator braid helps that.

At the pointy end, I only use circle hooks. Generally, with circles, the fish is caught in the jaw which is great for easier releases but does give the fish better fighting ability than when hooked deep in its throat or stomach with a conventional J-hook.

So to sum it up, Tony’s approach is to lock and load, keeping constant pressure on the fish with as much drag as the angler and gear can handle. This is done with high drag settings and positioning the boat to the angler’s advantage.

Fluorocarbon leader with its abrasion resistance and low light reflection is the go when making up traces and circle hooks are the only option for anglers wanting to release the majority of their fish. 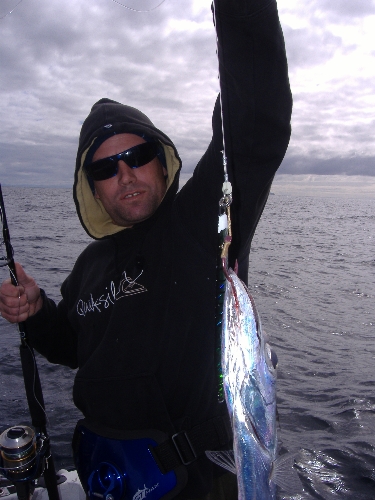