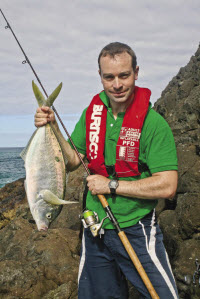 The trevally is my favourite quarry from the rocks: good looking, tough fighting, tasty to eat, but challenging to hook. There are ample reasons to chase them.

But, perhaps more than anything, it’s my memory of being ‘dusted’ by two very large specimens one afternoon on the Northland rocks that makes this species special for me and keeps me coming back for more. These trevally were in the 8kg-plus category, and couldn’t be stopped on heavy stray-lining gear that has proved more than a match for kingfish of the same size. Consequently, I now believe that pound for pound the trevally is the toughest fighting fish the Kiwi rock-hopper encounters.

It must be said though that trevally of this size are the exception rather than the rule, with 1-3kg specimens being much more common around various rock spots in the upper North Island.

But finding Trevor is only the first part of the challenge. The second part is hooking and landing him – which is much easier said than done, because not only is he line-shy, but if you do manage to hook him, he’ll explode off at high speed in search of the nearest rock.

With all this in mind, it is essential to bring your ‘A-game’ to the rocks if you want to successfully target trevally.

The big advantage the rockfisherman has over the surfcaster when trevally fishing is the ability to keep berley in the likely zone. Trevally respond very well to berley, and in certain locations and circumstances it is possible to draw large schools right to your feet in the same way you can draw in kahawai (for example). This can make a huge difference to your catch rate – indeed, failure to berley will often mean a failure to catch trevally altogether.

Not only does berley draw the fish to your feet, but it can also whip them into a competitive feeding frenzy that will cause them to lose their natural shyness. Whilst trevally have a well-earned reputation as a shellfish eater, they also respond well to fish-based berley. However, in some locations this also tends to draw in large numbers of kahawai and sharks, which can work against your efforts. Consequently, in these places a shellfish or kina-based berley is a better option (although I would still recommend cubing a fish bait, such as pilchards, into your berley trail). I also bulk out my berley with bread crumbs or chicken mash.

There are days when trevally will scoff just about any bait thrown in the berley trail, but mostly they are a shy biter that you must work very hard to hook. This is particularly so on clear, calm days, when line and hooks are more visible in the water. Trevally tend to like smaller baits that drift naturally through the water column, so stray-lining is the most productive method for targeting them.

Because of the need to drift baits naturally, I use small, unweighted baits. When stray-lining for snapper I normally cast out a gang-hooked whole or half pilchard with 5/0 hooks and a ¼ or ½-ounce ball sinker attached to a 50-80lb leader, but for trevally I downsize to small tail sections, 2/0 hooks, 30-40lb trace, and do away with the ball sinker. Small slivers of fresh kahawai also work well.

These small baits lack integral weight, so get dragged horizontally through the water if there is any wind on your line – and this movement is often enough to prevent trevally from biting. So when this happens, getting down close to the water and keeping your rod tip low (even in the water) can make a difference. (Casting small baits may also prove difficult, particularly with heavy stray-lining gear, but I will deal with that separately in a moment.)

Another problem when presenting baits to trevally is that there will often be equal, if not greater, numbers of kahawai around in the berley trail. Kahawai are a neat fish to catch, but patience runs short when your sixth beautifully presented bait in a row gets nailed by one before the trevally can even get a look in! Having said that, there are ways to get past them.

Trevally tend to hug closer to the rock ledge and stay deeper than kahawai, so get your bait down fast (put plenty of slack line in the water) and keep it at your feet;

Kahawai are more active in the berley, zipping around after the best morsel on offer, so use this to your advantage by having your mate throw small cubes of bait to the back of the berley trail, whilst you present your bait in close, where the trevally are. Next, focus hard on maintaining that ‘natural drift’ I mentioned earlier; whilst it won’t prevent kahawai bites, freely feeding kahawai are more attracted to moving baits. 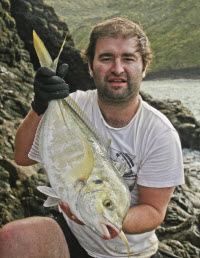 If serious about targeting trevally off the rocks, I suggest having a heavy stray-lining outfit. I’d recommend a 7-9-foot (2.14-2.75m) rod rated to 15 or 24kg, with a nice sensitive tip that will allow you to flick out small baits. Match this with a heavy-duty spinning reel loaded with 15kg mono or heavy braid that’s capable of putting out 10kg or more of drag.

This might seem like overkill for a species that rarely grows greater than 10kg and is generally less than 5kg. However, for trevally over 3.5kg or so, this is needed to stop them in their tracks and prevent them busting you off in rugged ground. This ‘lock and load’ type of fishing can result in pulled hooks, but avoids fish swimming around the sea with a hook in their mouth that’s trailing several metres of broken line.

A nice complement for a heavy stray-lining set is a lighter 6kg spin set. This won’t have great stopping power, but sometimes it’s necessary to go down to lighter gear to entice a bite from wary trevally. This rig will enable you to flick smaller baits and achieve an even better ‘natural drift’ on those days when the trevally stay frustratingly deep in the berley trail and refuse baits at the last possible moment.

Once you have hooked a good trevally on lighter gear, a different approach is required for playing it: you will need to be more patient, allowing the fish to take line under steady drag pressure, and you’ll also need to move around quickly to stay close to the fish and keep your thin line free of the rocks. Often the fish will run through weed, and when this happens it’s important to back off the drag pressure, remembering that the light line’s thin diameter does not offer much abrasion resistance on underwater obstacles. However, catching trevally on light gear like this is real sportfishing and great fun.

A few last things about Trevor

Trevally are most plentiful in the upper half of the North Island. I have caught them in my home waters around Wellington, but places like Northland, Great Barrier Island, Coromandel and East Cape produce them with greater regularity. They can be found in a variety of habitats, including harbours and the open coast, but seem to prefer areas where reef structures run off onto extensive areas of sand. If you live in the North Island, or even the upper South Island, and have this sort of habitat locally, it is likely trevally will visit at certain times of the year.

The type of fishing I’ve described is generally a very visual experience and has some similarities with fly fishing (explaining why trevally is a popular quarry for saltwater fly enthusiasts). With this in mind, don’t forget to take your polaroid sunglasses with you on the rocks; they can be vital for knowing that trevally are present, and will help you present your bait naturally, right on the fish’s nose. Because trevally also feed during the day, they are a good target for the kingfish angler who likes to turn his or her attention to other things once a live bait has been deployed.

I can’t recommend trevally enough as a target species for rock fishermen, yet they don’t quite get the kudos they deserve. Perhaps this is because trevs lack a little size when compared to say kingfish and snapper? Having said that, they do grow to about 10kg, and if I caught one that size I’d die a happy rock fisherman!

Trevally are a notoriously hard fish to catch. Craig Worthington takes us through his recent trip to the Far North and provides us with some insight... Read More >