Tarakihi is probably next only to snapper on the recreational fisher’s target list, being one of this country’s most popular table fish.

Grant Dixon shares some tips and tricks for catching them….

One of my first experiences of going on a ‘turkey shoot’ (‘turkey’ is the colloquial term for tarakihi) was aboard a charter boat out of Whangamata as a teenager.

When booking our places on the party boat for a Mayor Island excursion, we asked skipper Graham Hallen for advice as to what we would most likely be targeting and what bait to bring.

Apparently the snapper had not been on the bite, but where we were going was ‘loaded’ with tarakihi, so Graham said, “Go to a tuatua bed at low tide, pick yourself a bunch of shellfish, and lightly steam them open. After that, go to the tackle store and get yourself a handful of small long-line (re-curve) hooks and make up some ledger rigs using them.” This reply has stood me in good stead when targeting tarakihi ever since.

My mate and I followed his advice to the letter. A bucket of tuatua was gathered off the surf beach and steamed open. Then we made up several ledger rigs with Tainawa long-line hooks attached – no pre-tied Black Magic ‘Tarakihi Terror’ flasher rigs in those days!

Our skipper also suggested we bring some six and eight-ounce teardrop sinkers, as we would be fishing in relatively deep water with a reasonable amount of tidal flow.

We duly arrived at the boat early and secured the prized stern-corner positions, staking it out with our rods in the holders, as you do, and tying our sacks to the rail in anticipation of a great catch. Ice and chillybins didn’t figure too often in our game plan back then.

During the two-hour steam to the eastern side of Mayor Island, we chatted with three Auckland anglers, who had claimed the three remaining possies along the transom, so would be our fishing companions for the day. These guys regaled us with stories of their catches on the Kaipara Harbour, and also looked at our small 2/0 re-curve hook rigs with disdain, suggesting all we would hook would be ‘bait’ for them to use on the big fish they planned to catch. They were set up with ‘stump puller’ rods and reels, their terminal tackle consisting of three-metre traces onto which 6/0-8/0 Kahle style hooks were tied.

I had a relatively long rod with a softer tip, the reel being a Pfleuger Sea King multiplying reel I had borrowed from my dad, spooled with light Dacron line. It looked like a pop gun when lined up against their mighty cannons!

For bait they had a selection of squid, salted trevally fillets and whole mullet. When we showed them our bag of tuatua, our status as the ‘bait catchers’ was confirmed!

We were starting to doubt our skipper’s advice in the face of our neighbours’ barrage regarding our likely prospects for the day. To make matters worse, when the boat finally settled on the pick, one of the Auckland brigade was first in with his line, executing a mighty strike soon after, before making a big show of bringing on board an XOS granddaddy hapuku, exclaiming it to be “a great eating fish – tastes just like crayfish”, while giving his mates a knowing smile.

Beneath us, in 60 metres, was foul ground with some sandy patches, and beyond that a drop-off into even deeper water. I soon felt a distinctive ‘tap-tap’ on my line, which I quickly learned indicated the presence of tarakihi. This was followed up by the big strike and a miss, an effort I repeated several times, much to my frustration and the amusement of my newfound stern-rail friends – “baitfish picking at your shellfish”, they explained.

The skipper was observing the action and offered further great advice: “Don’t strike the fish when you feel the bite, just wind hard for 10 or so turns…” Graham, an ex-commercial fisherman, explained how the re-curve hooks worked, and that they needed to be ‘rolled’ into the corner of the tarakihi’s small mouth, as opposed to being set with a full-blooded strike.

Once the technique had been mastered, a steady stream of tarakihi came over the rail and began filling our sacks. After a couple of hours they were full, and we started on a third sack given to us by the skipper.

Halfway through the trip, that was topped up too, and now it was our turn to take pity on our three JAFA mates, helping fill their bins as well as sharing our ‘bait fishing’ hooks and the remaining tuatua.

On returning to the dock, the skipper had us string up our catch, which he helped carry off the boat and along the wharf.

“Best advertising I can get,” he explained. 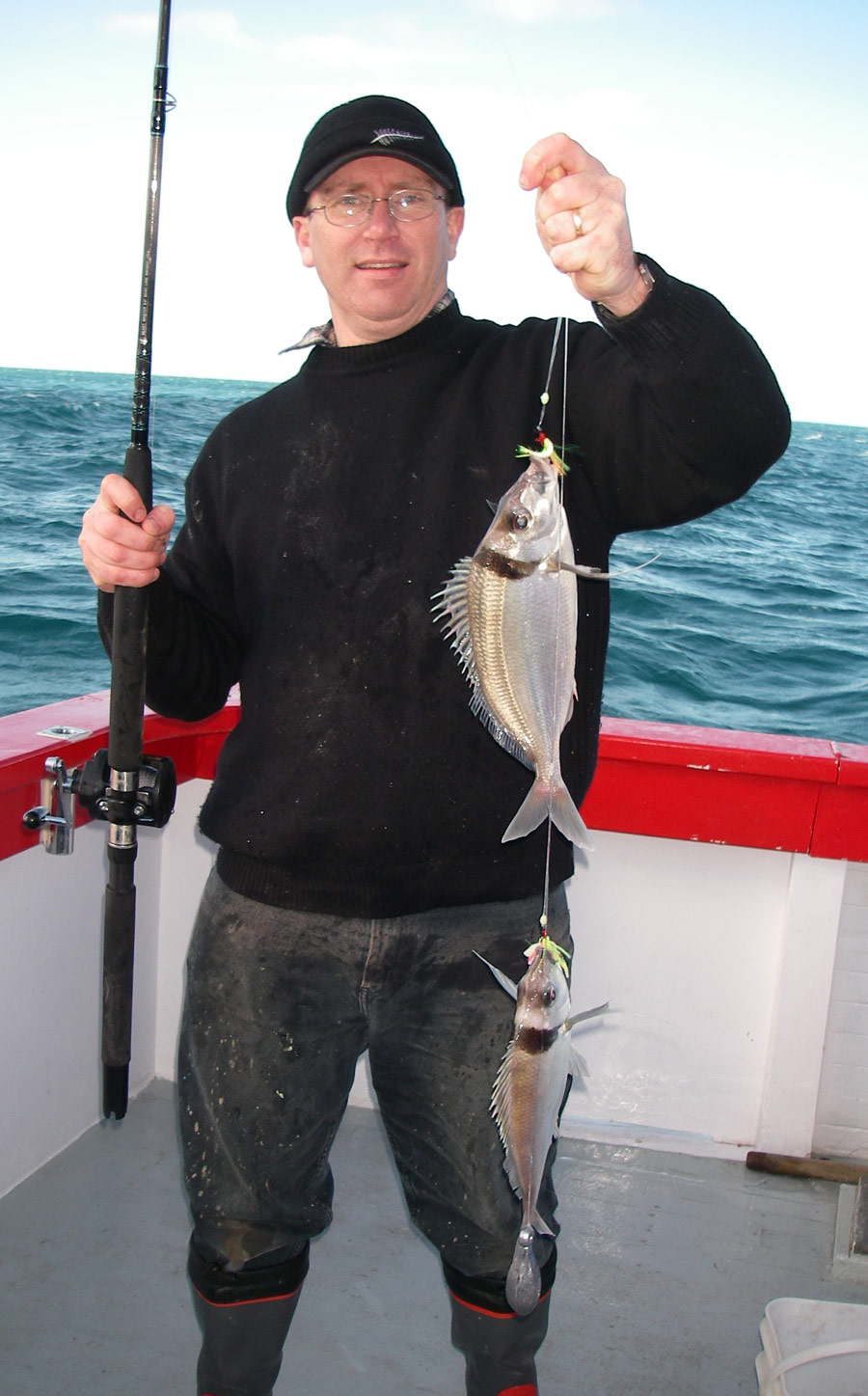 For us it was also the point where the fun ended and the work began, with several sacks of fish to deal with that night!

In subsequent years we had a number of similar charter boat trips, and while we never quite matched the haul of that first excursion, the advice Graham shared with us ensured we always came home with a decent feed.

Tarakihi are commonly found from the Three Kings Islands to the north, right down to Chatham and Stewart Islands in the south. There are two variations on the tarakihi ‘theme’: the common tarakihi found closer to shore and the ‘king’ tarakihi, caught out wide at places like the Three Kings Islands and the Ranfurly Bank off East Cape. A common tarakihi grows to 30-40cm and around 1.8kg in weight, while the king tarakihi is an XOS version, reaching 60cm in length and six kilos in weight.

In the South Island, I have caught tarakihi in relatively shallow water – 15-20 metres – while further north I have encountered them as deep as 200 metres. Their preferred food includes worms, shellfish and crustaceans. On one trip to the Three Kings, several of the king tarakihi I filleted were full of small crayfish no more than three centimetres in length.

A member of the morwong family, tarakihi can be found over foul ground, preferably where the reef meets the sand. As a diver searching for crayfish, I often encountered tarakihi in such territory, cruising in relatively tightly packed schools.

Tarakihi have small mouths relative to their body size, so tend to be nibblers rather than savage biters of baits. Then, when hooked, they are plucky more than powerful fighters, so light tackle and terminal rigs can be used.

One good tarakihi angler I fished with always uses a small in-line berley cage, which he fills with bran soaked in tuna oil and sometimes minced-up shellfish. This is set on his mainline above the swivel, with a Tarakihi Terror (he swears by the pink ones) attached below. Having his own portable berley supply in the right location, next to his baited hooks, works a treat and he always out-fishes me.

Gisborne contributor Alain Jorion showed me a neat trick when hapuku fishing, attaching a small tarakihi hook to the larger circle hooks used when targeting hapuku. This will often catch a tarakihi at depth, which makes a great live bait for the larger target species. At the very least you won’t have retrieved your line from 150-200 metres without something contributing to the day’s catch.

Because of the depth and the target species’ delicate bite, the use of braid line allows the angler to easily feel the attention of a fish.

Firming shellfish up by steaming them open or salting them is a good idea, as tarakihi can suck off a softer bait without the angler knowing it.

Freshly-opened shellfish should be bound to the hook using bait-elastic.

Tarakihi has a firm, white flesh that is easy to fillet and makes for great table fare. Like all fish, the culinary result will depend on how it is treated after capture. Ikied and placed immediately in a slurry or on ice will definitely improve the taste.

Tips and Tricks For Catching Tarakihi

Catching tarakihi can sometimes be a real challenge, but there are ways to up your catch-rate, explains young Bay of Plenty contributor Hayden Speed.... Read More >

Tarakihi profile and how to catch them

How to catch tarakihi and the best spots and areas to find them.... Read More >