How to catch snapper in shallow water

While I love the Hauraki Gulf and the superb snapper fishing it offers, I do sometimes get a little bored with its one-dimensional nature, writes John Eichelsheim...

In my home waters, it’s rare to catch anything other than snapper. Sure, you can catch kahawai and sometimes kingfish, gurnard and trevally as well, but for me, they are usually accidental captures, taken while snapper fishing using soft-baits or micro-jigs. In this part of the country, snapper is king!

I don’t want to sound ungrateful, but I find snapper fishing a little ho-hum at times – or at least my bread and butter harbour channel snapper fishing. It’s pretty consistent, but the fish tend to be of a uniform size and large specimens are rare.

Nor am I a great fan of work-up fishing – it’s spectacular and fun for an hour or so, with always the chance of a big fish, but not really that challenging. And anyway, I don’t like running too far offshore in my small boat. I also have concerns about what happens to snapper that are released in 40 or 50 metres of water, so I feel obliged to keep any fish I catch at that depth. Two or three fat snapper is as much as my family can consume in a week, so once they’re in the bin, it’s fishing over.

As a result of this, I’m always looking for ways to make snapper fishing more interesting, which is one of the reasons I embraced soft-plastics so enthusiastically back in the early noughties.

Snapper have a lot going for them, over and above their availability, eating quality and stubborn fighting qualities. Their nature as opportunistic predators means snapper can be caught in so many different ways and in diverse environments.

Who would have thought 30 years ago they would be such suckers for artificial lures? No one used lures back in the day, but nowadays I seldom use anything else. Over the years, I’ve taken snapper on a huge range of lures, from magnum Rapalas and bib-less minnows meant for kingfish, to tiny shrimp-pattern bonefish flies, mini hard-bodied bass lures and jigs of every description – not to mention soft-plastics, inchiku and slow jigs, and I’m still learning about lure fishing for snapper. I keep experimenting with lure fishing techniques in an effort to make snapper fishing more interesting. I’ve written about fly fishing for snapper before, and also about fishing soft-plastics in shallow water – firing plastics into the wash along a remote, rocky shoreline is my favourite way to catch large resident snapper.

Unfortunately, there aren’t too many of those in the heavily fished waters close to my North Shore home. There are, however, plenty of shallow reefs, rocky flats and sandbanks for snapper to exploit. I have found half a dozen shallow water locations within easy reach of home that consistently produce fish over the high tide, but I’m sure there are hundreds more. Shallow reefy areas are worth prospecting, especially in low light on the top of the tide.

Most of the fish I catch in these areas are of modest size – legal but seldom more than 45cm – although I’ve been surprised by the occasional much larger specimen.

This style of fishing is based around the tides. Some areas that I fish dry out at low tide or are simply too shallow to bother with at any other time except a couple of hours over the top of the tide. If high tide falls early in the morning before the light is too strong, or the area is well-shaded by trees, cliffs or islands, so much the better.

An evening high tide can work too, or even the middle of the day if the area hasn’t been disturbed. I’ve caught good snapper from rocky flats in bright sunlight at midday in mere metres of water, but make some noise or suffer the misfortune of having a jet-ski or another boat coming over to check out what you’re up to, and it’s all over.

What I love most about this form of fishing is its visual nature. You don’t generally see the fish before you catch them, except when they bite close to the boat, but in such shallow water, you can clearly see the terrain you are fishing.

On tidal sand flats, you can sometimes spot snapper tails waving in the air as the fish feed head-down on crustaceans and molluscs. These fish like soft- baits and are prime candidates for a fly fished on a floating or intermediate line.

At other times, and in various locations, including shallow rocky shelves, reef flats and boulder banks, swirls, splashes, bulges and wakes betray the presence of feeding fish. These giveaways are much easier to see in still conditions, but the fish are still there when wind disturbs the surface – you might just have to make more casts to connect with them.

The fishing is even more exciting when baitfish like piper and yellow-eyed mullet are spraying out of the water. Pitch a lure or fly in the general direction of the bust-up and a strike is almost guaranteed. Better still, sometimes the predators are not just snapper, but kahawai or kingfish.

As mentioned, most of the snapper I catch fishing this way are not especially large. Sometimes undersized fish can be a nuisance, especially when fly fishing, but often it’s a matter of finding exactly the right depth. The smaller fish tend to be in the very shallow water, with larger specimens found slightly deeper. We’re still talking shallow here though: one to two metres for a lot of this fishing, but the bigger fish more likely to be in two metres than one (there are always exceptions…). 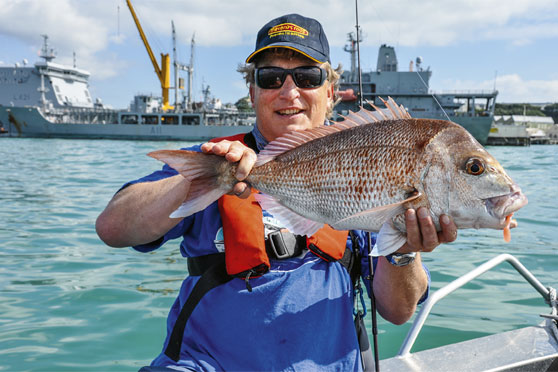 Even Auckland’s busy harbour can provide the goods with lures.

Because the fish are relatively modest in size, there’s no need for heavy tackle. Regardless, if you fish soft-plastics, you have to use really light jigheads to avoid constantly hanging up on the bottom, the water is so shallow. I routinely use 1/16-ounce or less for the really shallow stuff, and 3/8 when the water’s a bit deeper. The size of the soft-bait makes a difference, too – bigger baits hold up longer in the water column – as does the type of plastic. Some soft-baits float (Z-Man), while others are neutral or sink (Gulp!). Adjust the weight to get the sink rate you want.

I have a couple of favourite ultralight soft-bait outfits perfect for this style of fishing. Only one of the rods has a rating printed on the blank (3-5kg) but both are similar in terms of pulling power. At nearly 8ft, the longer of the two gives me a bit of extra casting distance and helps keep more line out of the water when a fish is hooked, to lessen the chances of snagging on the bottom. Its light tip also flicks lightly weighted soft baits a good distance.

The other rod is a seven-footer with marginally more firepower, which I tend to use in slightly deeper water.

The reels, a Penn Conflict CTF 2500 and a Daiwa BG200, are both spooled with 10-pound braid. Fluorocarbon leaders are also light (10-13 pounds), and I re-tie my loop knots and examine the trace for damage regularly to avoid break-offs. Some areas are encrusted with oysters and barnacles, so line damage is common. Boating fish on light tackle in such areas is a challenge.

When fly fishing, a 7-8wt rod with a floating line (an intermediate line is useful if the water is deeper than two metres) and a generalised baitfish, crab or ‘shrimp’ pattern work well, fished on a fluorocarbon leader. Weighted flies are the way to go, and there’s no need for tapered leaders because delicate presentations are not that important. Indeed, the fly (or lure) splashing down often catches the attention of any fish close by, resulting in almost immediate hook-ups.

Lately, I’ve also been playing around with some small stick baits I picked up on a trip to Australia. These are popular over there for bream, and I’ve caught a variety of species on them in Australia. They work well in this shallow water environment, though the stock hooks are too light for our snapper and should be replaced.

I’ve enjoyed success with small poppers too (yes, on snapper!), but most small-ish floating or suspending stickbaits work even better. I have an old 7cm Zara Spook walk-the-dog style lure that’s dynamite when fish are chasing bait in the shallows. The strikes are spectacular.

So, if you are looking to spice up your snapper fishing, quietly poke your nose into the shallows and give the light tackle a shot. The fish you catch might not be huge, but the fishing is challenging and fun. And when you hook a big one (or even a modest 2kg specimen), it will really test your fishing and boat-handling skills. 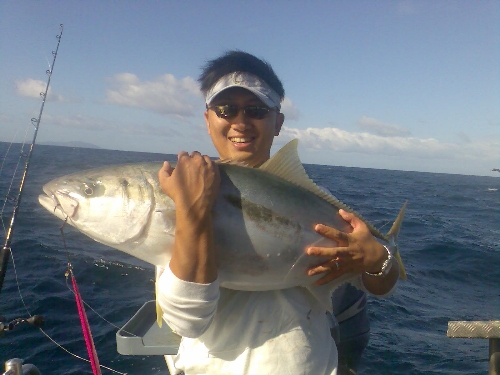