How To Catch Bluenose

Winter can be frustrating! Short days, bad weather and the cold temperatures may be enough to send the boat into hibernation. Although winter affects fishing as well, it’s not always in a negative way. In fact, the transition period leading into the winter season is one of Jordy Bardin’s favourite times to fish and dive both in close and offshore.

It is a time for migration and spawning activity for many critters, from crayfish, which come into berry and softshell, to bluenose which are often caught full of roe or sperm. This time of year offers a great opportunity to get stuck into some unique deep water species such as bluenose, hapuku, bass, and gemfish which move in closer to the shallower knolls and reefs when they spawn. Swordfish move in to feed on the spawning aggregations.Although they are in our waters all year round, their migration during this time of year puts them in a more accessible range for us recreational fishers. Aside from deep-water fishing, NZ gets another run of gamefish in winter in the form of southern bluefin tuna and albacore. Our inshore fishing around the Bay of Plenty also starts producing tasty john dory and tarakihi. In this instalment of ‘Know Your Winter Species’ the elusive bluenose is on the menu. Also known as matiri in Maori or Hyperoglphe antarctica, they are always a welcome catch on our boat! 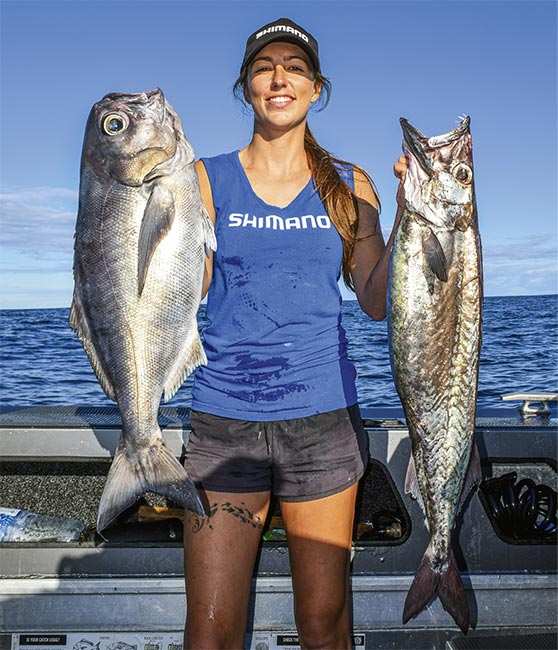 A nice bluenose and a commonly caught by-catch of gemfish, caught at Mayor Island.

Bluenose are deep water species and like many fish that live at depth, they are long-lived and slow growing. Their characteristics are also typical of deep water species, with large eyes allowing them to seek out prey in low light conditions and dark blue/grey colours for camouflage. Most species at these depths have dark colouration, typically black or red. Red you say? Well, the red wavelengths of light are the first to be lost as you descend below sea’s surface, so red appears to be dark/black at depth. The scorpion fish (grandaddy hapuku) is an example, being bright red to our eyes at the surface but dark and camouflaged at depth. Bluenose can weigh up to 50kg but are more commonly caught between five and 20kg. They can be quite aggressive fighters and may fight all the way up to the surface; however, because of the pressure change they will inflate and should start floating 50m from the surface.

They are found in the temperate waters of the southern hemisphere and are caught both commercially and recreationally in NZ. They are generally found between 100-500m, with migration to the shallower depths generally from around May in the Bay of Plenty area. This makes May the prime time for recreational fishers to start targeting them, but we’ve even caught them through summer as well. Although not a lot is known about their lifecycle, these migrations are linked to spawning as many of the larger specimens are caught full of roe (eggs) or sperm. Bluenose tend to aggregate around rough seabed, in particular seamounts or pinnacles which are the general areas where you should base your deep sea fishing around.

Bluenose have a varied diet including invertebrates, small fish, squid, crustaceans and even larger fish such as young gemfish. So all sorts of bait may be successful including bonito, squid, pilchard or even strips of fresh kahawai or gemfish. Cuts of bonito (not too big) and squid have worked best for me. Hook through once at the top of the bait so that the barb is well exposed. This allows the circle hook to catch in the corner of the mouth with no obstruction. Lights or glow sticks attached to the rig may also attract fish and improve your catch rate. This may be because bioluminescence is emitted by many deep-sea organisms, attracting larger fish to the area.

Bluenose are often caught while targeting other deep water species like hapuku, bass or gemfish on the same/similar gear and rigs. Braid is a must when fishing at 100m+ because, unlike monofilament, there is little stretch in the line, allowing you to feel any bites with hundreds of metres of line out. Electric reels are very convenient for those deeper spots, otherwise reels with a high spool capacity can be used. My general setup for deep sea drops includes a Shimano Forcemaster 9000 and a Shimano Talica 50. A ledger rig consisting of two or three 12/0 circle hooks is commonly used; however I prefer smaller hooks for bluenose, such as 10/0. One smaller hook can also be attached to the rig for tarakihi or other smaller species which lurk at those depths. The trace line used is heavy – 300-400lb. The droppers can be attached by swivel sleeves and the line can be protected with lumo tubing. A heavy sinker (around 30 oz) is attached to the bottom of the rig, often with a length of nylon which can be snapped off if the sinker catches on the bottom. Squid skirts and lumo beads may also help to entice fish – either way they look nice!

With any deep sea fishing, a nautical chart which shows an area’s bathymetry (depths) as well as all the seamounts and contours is vital. Whether it is found on your GPS sounder or online, any pinnacle within range may be worth a drop. A powerful transducer paired with a good sounder is a game changer when it comes to fishing at these depths. We recently upgraded to a one kilowatt transducer on our Stabicraft 1850 and paired it with a Garmin 820xs sounder. Now we can see the seafloor in approximately 500m which allows us to motor around and find the fish sign instead of dropping blind. There’s nothing wrong with dropping blind, of course, but having this technology definitely saves time and energy and also increases the chance of a hook up.

Calmer seas and minimal wind is favourable when deep sea fishing, especially when fishing from a smaller boat. The aim is to keep the line straight up and down with the rig just up off the seafloor which requires idling the boat in reverse periodically, as well as winding in or letting out line in order to keep the bait in the zone. Getting your drift right can be key. Remember that it will take a few minutes for the bait to get to the bottom. You want to be drifting your baits through any sign found on the sounder, over a rise or along a drop-off.

When a fish comes along and tugs on your line, a slow lift or wind of the rod is appropriate when using circle hooks. The bluenose will attempt to inhale the bait so you don’t want to jerk the hook out of its mouth. Alternatively, you can just let the fish hook itself.

Remember that bluenose cannot be released when pulled from such depths at speed. Their swim bladders over inflate as they are pulled towards the surface which results in pressure on their vital organs. Their stomach, swim bladder and eyes will often pop out. It is important to stop fishing once you have enough for a feed as these fish are extremely sensitive to overfishing due to their slow growth/late maturity rate.

Bluenose are fantastic eating. Even small ones contain a lot of meat and although it’s disheartening to find some full of roe, but smoked bluenose roe is absolutely beautiful. It can be eaten hot or used as a pâté, spread or be added to smoked fish pie etc. The meat is succulent, firm and white and holds together when cooked, making it perfect for curries and stir-fries. The meat can be a little tricky to cook as it dries out very quickly – the key is to undercook it! It is also fantastic as sashimi, and the leftover head, frame and wings can be thrown in the smoker. There is really nothing you can’t do with bluenose! YUM! 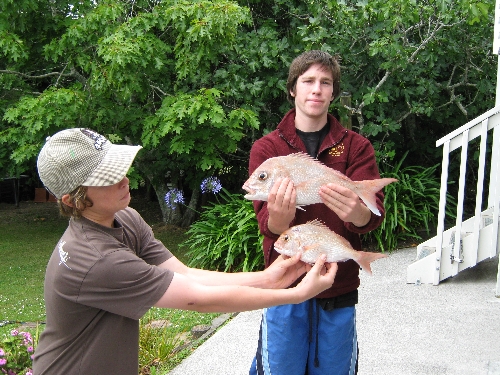