How to catch bluenose and bass

Autumn is one of the best times for fishing, especially for the deep-water species, suggests Alistair Arkell…

With summer now turned to autumn and the water temperature still warm, we are right in the middle of the best time of year for fishing. Consistent marlin fishing can be found on the upper east coast of the North Island and the swordfish season is at its peak. Large kingfish also take up residence around known shallow water hotspots and if you’re chasing trophy snapper, April and May are the best months to do so.

As you can see, there is a lot to get excited about in autumn. While I enjoy all of the above, I especially love this time of year for the chance of catching big bluenose and bass – and not just any big bluenose and bass, but fish up to and over the magical 50kg mark. For bluenose in particular, 50kg is a recognized maximum and I have only personally seen a photo of one such fish that was caught on the fabled Garden Patch, an area off the coast off Cape Karikari. Although this popular spot has had a thrashing both commercially and recreationally, it’s still a reliable, good-quality fishery and, by all accounts, still holds the largest concentration of bluenose accessible to trailer boat fisherman.

What’s so special about April/May?

It’s spawning season. This means the large female bass and bluenose congregate in bigger numbers to mate with smaller males before spreading back out onto the mud and various reefs and rocks from where they came.

At this time of year, large bass can be reliably targeted in shallower waters (200 metres), but, for whatever reason, bass can be caught as shallow as 50-80 metres of water off the northern coast and towards the Three Kings! 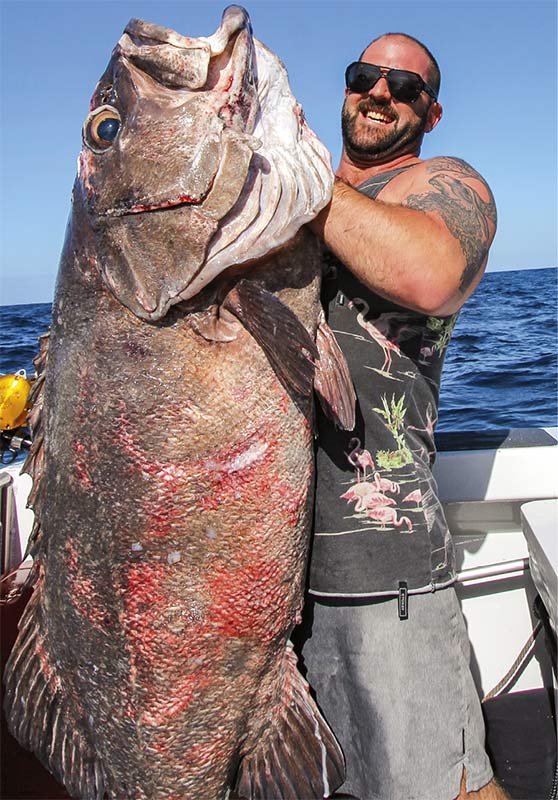 Every so often anglers encounter big bass like this specimen, but substantial gear is needed to handle them.

This is not always on foul ground either. Another well-known area for catching bass is the famous Ranfurly Banks. I also suspect (I have never fished there) that the North and South Madden Banks, a very remote system 70 NM south of Napier, would hold fish shallow at this time of year. One day, given enough time, I intend to explore these grounds and duly report back with the good oil.

Bluenose are a slightly different kettle of fish, but where you can catch bluenose you will also get a bycatch of bass – if the bluenose gives them a chance! Bluenose can be caught as shallow as 200 meters, but the money depth is 300-350 metres. Typical school fish are 5-15kg in size. As May is spawning season, for a short-ish window of approximately eight weeks, large female bluenose come en-masse into the reef structures 300-350 metres deep to spawn with smaller males. The beauty of bluenose is that they normally congregate in big numbers and are typically easy to catch. Expect 15-25kg fish and, if you’re lucky, you might just put your bait in front of a 30kg behemoth. 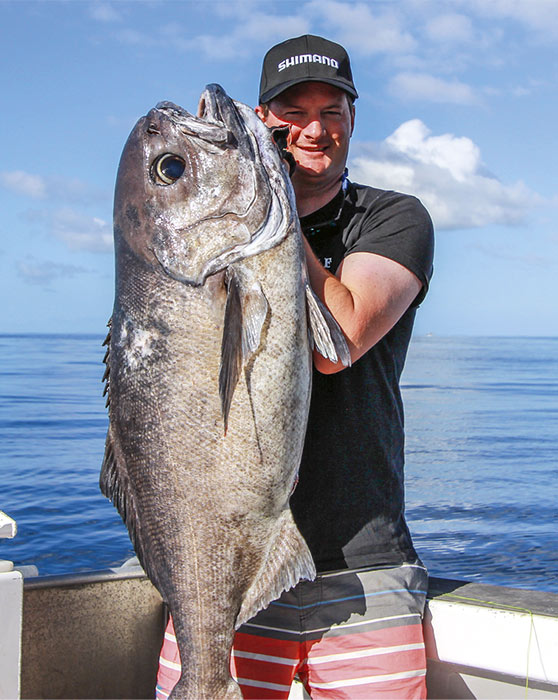 The writer with the target species - there is a lot of sweet eating in a fish of this size.

Rod and reel wise, anything from a TLD50-style reel, to the latest electric set will catch you fish – some just make your job easier than others! All of what you need is readily available at your local tackle store. In terms of line, 80lb braid should be your minimum. Remember, big bass and bluenose fight hard – really hard. Hooking a big bass is sometimes more akin to dragging in a small car than a fish!

Bait – this is simple, go with fresh! It does not need to be alive for either of these species, but fresh is the key! If you want a big bass, think BIG BAITS. A one-kilo fish is nothing for a big bass and this would routinely be part of its morning tea snack.

For bluenose, there is no requirement for big baits, and often a small bait like you might use on a snapper flasher will work better than a large one. Most commercial longliners only use small baits for bluenose. They can be fussy eaters, and if you’re getting back baits with cookie shaped bite marks (easiest to see on squid) then you are using far too big a bait. 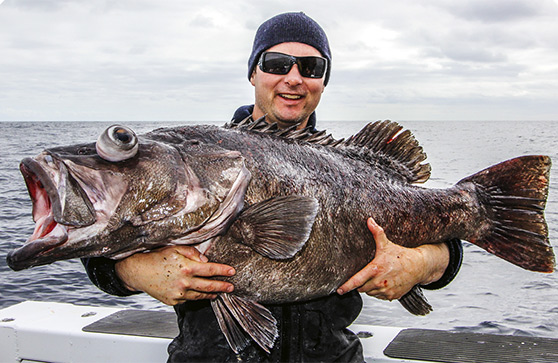 Bass are a welcome bycatch when targeting bluenose.

Hook your bait only once through with a recurve (circle) hook. It doesn’t make a lot of difference if you make your own dropper rigs or if you buy them off the shelf, they all work just as well as each other. When fishing big baits, make sure you use a big hook and that the bait is hooked once through the nose of the bait so it will not impede a hook up. Another method is to bridle-rig your bait. This creates more movement and allows the hook to easily penetrate the fish’s mouth.

Probably the most important piece of equipment when fishing in 300 metres (aside from braid), is a flashing diamond light. As a fishing buddy of mine says, “no light, no bite.” Any tackle store worth its salt will have these. One is enough, and it just needs to be hooked onto a 300-pound snap swivel.

Another handy tip for rigging is to use a light cable tie to connect your sinker to your ledger rig. This method has saved me a lot of money on rigs and sinkers over the years. With this method, the sinker will break off with the necessary pressure if snagged on the bottom, but it won’t break off by just hitting the reef or drifting over reefs.

I’ve found that a light 15kg mono break-away will do just that, and using a 24kg mono makes it far too difficult to break off once you’re snagged. Give it a go – you won’t be disappointed!

You have the boat all set up and you’re as keen as a bean, but are unsure where to go… Well thankfully modern sounders and GPS chart plotters with bathymetric charts make life really easy.

The best bit of advice I could give you (without sharing GPS marks) is to grab a paper and bathy chart for the same area, spread them out on the kitchen table and study the 300 metre mark – this is best done with a cold beer. Any obvious hump or hill in 300-400 metres will hold bluenose and small bass. Experience suggests that if you put some time in on grounds that look fishy, you will catch fish.

For me, the areas of real interest are the small hooks and crooks on the contour lines, which typically indicate small rises and small rocks. These create an uplift in current, which is where the food chain begins. Anything unusual on a chart is worth checking out, and all our best fish have come from areas we have found in this manner.

Also, with areas like this, you are potentially fishing somewhere that has never been fished before. These rocks are becoming increasingly rare, but once you find one, you won’t believe your luck!

Forget about rough water. For this sort of fishing, you want 10 knots or less, otherwise you are blown off course and off the ‘mark’ before your lines get a chance to drift over the rock. A good skipper will keep the boat in reverse and over the mark, with lines straight up and down, giving you a considerably better chance at catching a big fish. If your lines are miles out the back, you’re virtually wasting your time as your catch rate will be substantially lower.

Many trailerboats are fitted with electric motors which can use ‘spot lock’ modes to hold you over the target area. Some launches have a similar system, usually used for docking and close quarter maneuvering, that have a ‘sky hook’ function that will hold you above the mark.

Make sure your boat has enough range and back up fuel to travel long distances, as typical bluenose grounds are at least 30 nautical miles off the coast, sometimes further. This is another reason why you should only fish for these species in under 10 knots.

Like all fishing, early morning represents your best time to catch deep dwellers; however, if you’re fishing rocks unmarked on the chart, then time of day won’t really matter. But if you want to maximize your chances and are fishing known marks, then the early bird gets the worm. I have also been reliably informed that these fish bite well at night, but have never had the need or the desire to fish for them in darkness.

Keep an eye on the weather, get a good crew together, as well as a big chilly bin with lots of ice, have all your tackle prepared and ready to go, and when the weather allows, get out there and give it a crack! You may be surprised at how easy it is, and your family will love you for it once they are eating those sweet, sweet fillets!

As we head into winter, increasing numbers of our favourite broad squid are caught. Day or night, it makes no difference as these tasty mors... more >

Grant Dixon reviews the Surtees GF 700, which had plenty of changes made to it in preparation for the cancelled 2020 Hutchwilco Boat Show. H... more >

Mark Kitteridge continues his series profiling Rick Pollock, one of the best charter captains NZ has ever had. In this article, Mark shares ... more >