One only has to walk into the various fishing-tackle shops and see the huge array of bait-fishing hooks to be reminded we have plenty of choice!

It’s a sight that can be somewhat overwhelming for relatively new fishers, but it needn’t be, especially if we get rid of all those styles that aren’t circles/recurves.

After all, J-type hooks can be easily swallowed by our quarry (with some positive acknowledgement to those anglers using very big hooks to make the problem less likely, especially to undersize fish) and they then often catch hold in the guts or gills. This makes survival less likely for any fish subsequently released or which manage to break free. Contrast that with circle hooks, which are super effective and cause much less injury to hooked fish as they nearly always hook in the front of the mouth. That’s why I firmly believe they are the way of the future.

While there are almost as many bait-fishing rigs as there are different hook types, let’s concentrate on the recommended hooks for our three most popular: the ledger/dropper rig; the sliding-sinker rig; and the stray-lining rig.

Whenever I think about the dropper rig, I think of the original Black Magic ‘Snapper Snatcher’, even though other companies came up with some pretty good offerings soon after (most notably Gamakatsu). This rig has been around for many years now and it repeatedly reminds me how incredibly effective this setup can be in deeper waters, even in the hands of complete novices. Let’s look at why it has been so successful, as this gives insights into how to make more effective rigs ourselves. A wide variety of attractants have been incorporated or added to enhance the rig’s effectiveness.These include: Such is the success of this rig it’s led to several others that target some of the more popular table-fish species (i.e. gurnard, cod, tarakihi and hapuku) incorporating smaller or bigger hooks tied to heavier or lighter trace material as required.

Making your own dropper rigs 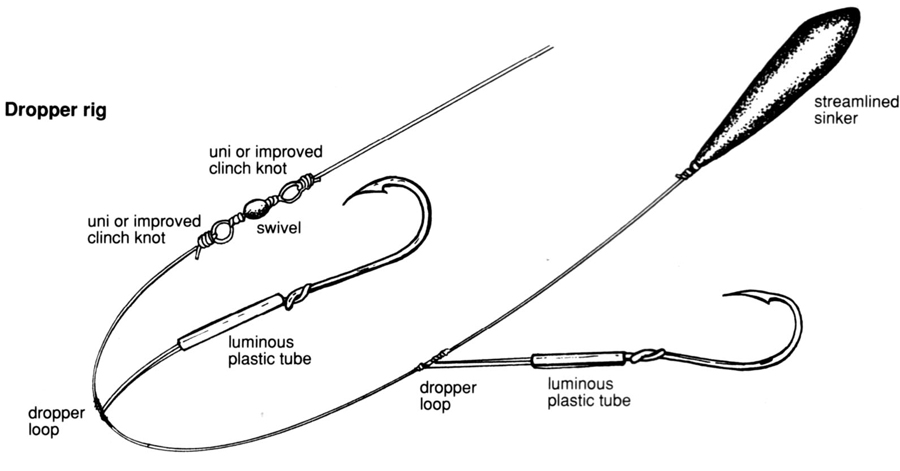 The last rig, for hapuku/bass etc, is the only one worth discussing further, as it is obviously significantly bigger.

Typically tied with 200-400lb trace, the large hooks and often aggressive, fearless fish involved mean much bigger baits can be placed on the hooks, but it’s important to do this correctly so hook-ups occur. No-one likes to wind back up 300-400 metres with bare hooks after missing their chances!

Some options include: large squid hooked just once or twice about two inches down the mantle; live or dead mackerel nose hooked through the front of the eyes; fresh (if possible), slim strip baits of barracouta, kahawai or skipjack/albacore, hooked once or twice at one end.

Traditionally, 15/0 hooks have been used for hapuku and bass – and even the generally smaller bluenose – but as the average size of these species has fallen dramatically in recent years, 11/0 is becoming the wiser option.

Whatever the size choice though, recurve hooks serve another role while the big fish are wound up from deep down: as the ‘puka and bass embolise and fill with air, causing them to rise increasingly rapidly as they near the surface, the circle hooks help to keep them on the line, unlike J hooks, which can lose their grip