Calamari, when prepared right, is a real delicacy and this is what makes eging so rewarding for us. Just like the squid’s endless combinations of camouflage, the same applies to preparing calamari dishes (your imagination is your limit). This article briefly covers what happens between catching and cooking and shares some of our favourite recipes.

Like any seafood, taking good care of your squid catch greatly improves its eating quality. We like to dispatch our squid as quickly and humanely as possible using a small tool called a squid iki-spike. It looks like a flathead screw-driver. Squid have several main nerves, so it is necessary to iki them twice in different spots.

First, point the iki-spike in the direction of the mantle just above the head at angle of around 60 degrees and push. If done correctly, the body of the squid will immediately change colour to white as the chromatophores are shut down. If one side of the body turns white but the other side doesn’t, repeat again but offset the spike slightly towards the side that didn’t change colour.

Next, firmly pushed the iki-spike in between the eyes to kill the head. It can take a couple of attempts to get this right. Another neat trick, if you don’t have the tool, is to do a quick and sharp karate chop just above the eyes. Then, immediately put the squid on ice.

During land-based missions, we like to bring small chilly bins with cooler/ice packs, which we then fill up with a bit of saltwater to keep the squid cold and out of the sun. Exposure to the sun can  ruin them.

Squid can be stored in the freezer for a long time, but it is important to gut and clean them first. To do this, use your fingers to separate the guts from the mantle along the cartilage line or backbone of the squid. If done correctly, the head and the guts should come out in one piece. Remove the wings and peel off the skin (the wings can also be eaten). Then, cut just below the eyes and remove the beak from the tentacles. The tentacles are also great to eat. Give them a thorough wash and then put them in a sealed bag and into the freezer until it is ready to be eaten.

We prefer to store our squid as tubes, as it gives us more options to cook with than if it were cut lengthways and stored as an envelope of squid. Soft-bait fishing in the shallows from a kayak January 2020

Kayaks have proven well-suited soft-bait fishing and a significant number of trophy fish have been landed using this method.... more > 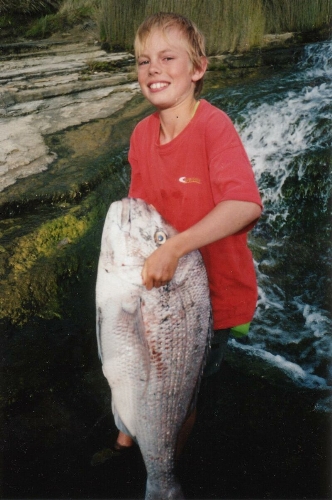