Gemfish (Rexea solandri), or m?kataharaki, can be annoying when targeting deep water species such as bluenose or hapuku – sometimes you just can’t get away from them. They are aggressive predators which attack most baits, with multiple fish often hooked at one time. They aren’t the prettiest fish, but according to Jordy Bardin, they taste way better than they look…

Gemfish are a deep water species belonging to the Gempylidae (snake mackerel) family. Barracouta also belong to the same family and share similar characteristics to gemfish, such as a comparable appearance and the same aggressive, predatory nature. However, gemfish have a deeper body compared to barracouta and are generally found in deeper water. Gemfish are also unlikely to be infested by parasites or worms and are beautiful eating, unlike many of the barracouta found in our waters. Gemfish are a long, slender fish with thin iridescent silver skin and have a slimy coating. They have very sharp, dagger-like teeth which they use to tear through all sorts of prey. These should be avoided when handling them. They are a schooling fish which reach a maximum known age of 17 years and have supposedly been caught up to 16kg. However, the current IGFA record is only 10.84kg. Around Mayor Island, we have caught them anywhere from around 1kg to almost 10kg, with some being over a metre in length.

Although gemfish may be caught all year round, their migrations (which are linked to spawning activity) mean they are found shallower during some of the winter months. Consequently, they are targeted and caught by both recreational and commercial fishers, more so during winter. The main season for the commercial trawling of this species runs from February to July and they are most heavily targeted off the northern and eastern coasts of the North Island. Gemfish can be found anywhere from 50m to 550m deep, often targeted around structure such as seamounts, where other deep-sea species like bluenose and hapuku are also found. We fish the seamounts and pinnacles surrounding Mayor Island but suitable spots can easily be found either on nautical charts or online for all different areas in NZ. 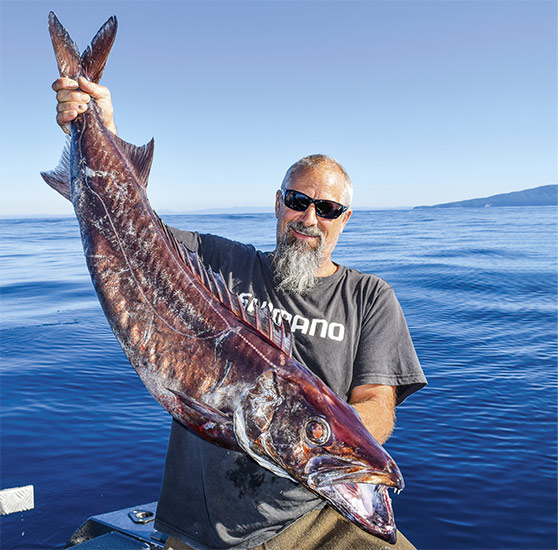 Shaun Bardin showing off one of these hungry predators.

Gemfish will eat just about anything, including their own kind! So in terms of bait, I recommend anything meaty and oily like a nice chunk of skipjack. This is sure to get them excited; however, they will take practically anything that you decide to put on your hook, even slices of gemfish! And if you don’t want to eat all the gemfish you catch, they make great bait for other deep sea fish such as hapuku. Attaching lights to your rig may also help attract gemfish to the bait. Any setup similar to the deep sea ledger rig, which you would use for bluenose or hapuku, can be used for gemfish. They will often take chunks out of the leader so a good heavy trace of 300lb+ is required and you may want some spare rigs on hand just in case it does get chewed up. Keep the mouth well away from any braid line as their teeth will cut straight through it (I have learnt this the hard way!). Gemfish have large jaws so the hook size doesn’t appear to matter too much – we have caught tiny to monster gemfish on a range of circle hooks from 9/0 to 12/0. Further information about rigs and how to target deep sea fish can be found in my last article for NZ Fishing News (which was based on bluenose). The same principles apply when fishing for gemfish: use nautical charts and a sounder when looking for places to drop your lines, manoeuvre the boat so your lines are vertical and keep your bait just above the seafloor. Where there is one gemfish, there are probably more and you will most likely feel a lot of tugging on your line as they are aggressive predators. If you don’t hook up and the biting stops, the greedy critters have most likely stripped your hooks of bait. They quite often hook themselves with the circle hooks but a slow lift or wind of the rod is adequate when trying to hook a fish. They don’t tend to inflate like bluenose or bass so be careful when handling these fish as they are likely to be very lively and their sharp teeth can do some serious damage. This also means they will swim away sometimes which allows the possibility of catch and release in shallower depths. However, it’s best to keep what you catch and stop fishing or move when you have caught enough, instead of risking the survival of a fish that has been brought up from considerable depth.

When filleting your gemfish, you will notice a few extra bones than usual, especially if you are wanting to cook it instead of smoking the whole fillet. The top half of the fillet contains a section of bones which sit just under the skin which are quite difficult to cut around without losing a lot of meat. It’s easiest to cut your fillet in half horizontally where the bones finish, which leaves you with a nice tail section to work with. I then keep the top half for the smoker, or if you are feeling patient, you can cut out all the fiddly bones instead or just eat around the bones once cooked. The soft, white meat is succulent and full of moisture and the fillets make for some of the most beautiful smoked fish. The roe (if the fish is in egg) can also be smoked and eaten like pate. However, gemfish is just as good fresh! The fillets, pan-fried in a bit of butter with a squeeze of lemon, is delicious and will just melt in your mouth due to its high fat content. 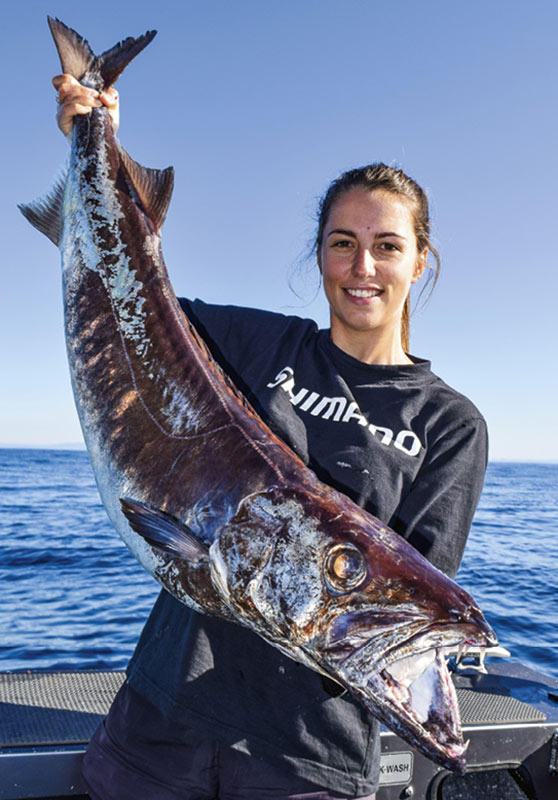 The writer with a 9kg gemfish - plenty of meat on these bigger ones for both smoking and cooking fresh.

So next time you are about to toss that gemfish back over the side, think twice and give it a go fresh. You might just be pleasantly surprised…