Gamefishing with Trailer Boats: How to Keep a Tidy Ship

There is a saying among sailors – ‘a tidy ship is a happy ship’ – and the same applies to a gamefishing boat, be it a large launch or the smallest trailerboat. The smaller the boat, the tidier you have to be suggests Grant Dixon, who shares some ideas on keeping your vessel ship shape and Bristol fashion…

Have bin, will travel

Gamefishing involves lots of smaller items from lures through to accessories such as outriggers, tracing gloves, release cutters, tag and tagpoles, gaffs and larger rods and reels – all adding up to a lot of clutter which can take over your cockpit if you’re not careful.

Much of my gamefishing has been done out of trailer boats where space has been limited. I also fish out of several boats, including our project Billfisher 735 and Extreme 745 Centre console, as well as my personal FC 535 centre console. It means gear is taken from boat to boat as and when required. This is where my ‘list’ and a decent-sized lidded plastic bin come into play.

At the start of each season I go through the list and replenish anything that has been used the previous year. A prime example is #32 rubber bands. You go through a fair few of these in a season and they also perish over time.

The bin contains all those small, but necessary items such as rigging needles and waxed thread, spare pre-made livebait rigs and wind-on leaders, essential lure rigging components and a selection of hooks, a small roll of trace material in various line weights – 400lb down to 130 – flatline releases, electrical tape, safety lanyards, pliers, tags and cards and hook files. While it is rare to lose a rod from the holder, a decent lanyard will save you from an expensive loss should it happen.

Lures are best kept in their own lure roll, but bait bungie lines can be included in the bin along with a selection of kahawai, skipjack and mackerel lures and sabikis.

Then there are items of a personal nature – sun and lip screen, a small first aid kit, spare sunnies and a cap.

There are some basics you need for every boat and there is a separate ‘essentials’ list for this. Outriggers are obvious, but less so are stand-up harnesses and rod buckets, binoculars and bolt cutters. The latter are to deal with any hooks that the crew might accidentally impale themselves on.

Boltcutters are usually manufactured from mild steel, so wrapping them in an oiled cloth and placing in a plastic bag before stowing is a good idea.

Gaffs, due to their length, are not easy to stow in a small boat. I use the individual Nacsan closed cell foam racks with Velcro tab holders that stick on to the internal alloy sides. The shaft of the flying gaff and the tag pole are similarly stowed – out of the way but within easy reach. The point of the flying gaff is protected by a suitably-sized piece of plastic or rubber hose. I have seen one nasty wound inflicted by a ‘stowed’ gaff and I don’t want to see another!

For smaller boats, the two-piece telescopic outriggers that drop in to rod holders, either in the gunwale or the rocket launcher, are easy to stow and negate the need to install permanent bases. These are also transportable from boat to boat.

Dredges add a whole new dimension to attracting billfish. There are some great portable dredge poles around that drop into rod holders. Dredges and the weights needed to run them put a great deal of strain on the system and the rod holders need to be up to the job. Other teaser systems such as ‘Witchdoctors’ need to have secure towing points.

Once you have hooked up when trolling lures, it is often a mad scramble to clear the gear and rods are initially left all over the place. Once the fish settles down and the angler gets tight to the fish, have a tidy-up. Rods can go in rocket launchers and it is not a bad idea to unhook the lures and put them to one side. In the mad-panic that occurs in some cockpits when the fish is alongside, the last thing you want are loose hooks flailing around.

Mahimahi have become a more prevalent catch in recent times and these are great eating fish, but can be a bit tricky on the gaff. Once they are gaffed, they can be forced into a corner of the cockpit where a strop made with a loop at one end and a large, barbless hook on the other is used to hog-tie the fish, preventing it from going nuts. A judicious whack with the ‘priest’ on their heads tends to slow them down very quickly.

Over the years I have come across a couple of devices for storing sabiki rigs, an essential part of any livebaiting gamefisher’s kit. Some come on closed cell foam holders, but most are packed on cardboard holders. I have come across several great ‘post packing’ units which allow for multiple use of the sabikis. There are also rods designed specifically for sabikis with the rigs themselves fitting inside the tubular blanks.

Keeping game lures tidy on any boat, let alone a smaller one, is never easy. Traditionally, I have bundled up the trace and kept it in place with a rubber band which over time may loosen or break. More recently, I purchased some cable bundling from an electrical supply store and cut this into small lengths, winding it over the trace to keep it all together. 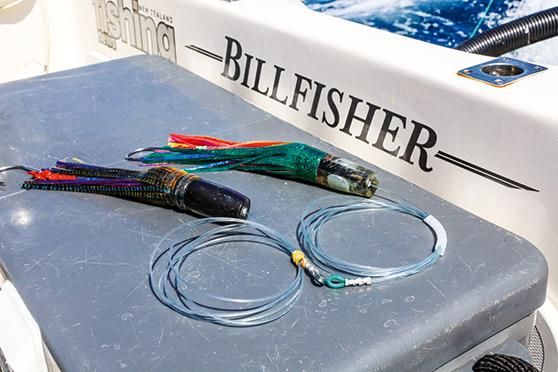 Creating even turns on the trace when rolling it up is done using a little trick I learned many years ago from Jeff Strang when he was a charter skipper. It involves using the handle of a reel as a spindle to create even winds of the mono. Start with the lure end and as you get closer to the other end, allow it to spin and take out any potential twists created by the winding process. It is easy to alter the size of the trace roll by adjusting the distance of your hand from the handle. 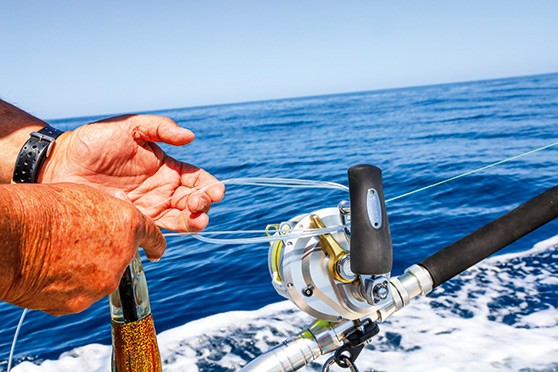 A simple way to coil trace is to wind it around a reel handle.

Another little tip I picked up from Jeff, again using the reel handle, was for tying short doubles via a bimini twist. Keeping tension on the line once you have created the required amount of turns, place the bottom loop over the handle and use your fingers of one hand to spread the line while controlling the reversed twist with the tag end in the other.

It is much easier than tying it the traditional way wrapping the line around your toes and knees to keep the tension on.

One of the best bait stations I have seen on a trailer boat is on Matt Watson’s new ITM Fishing Show Stabicraft. It has a place for everything – needles, thread, trace, knives and tools. 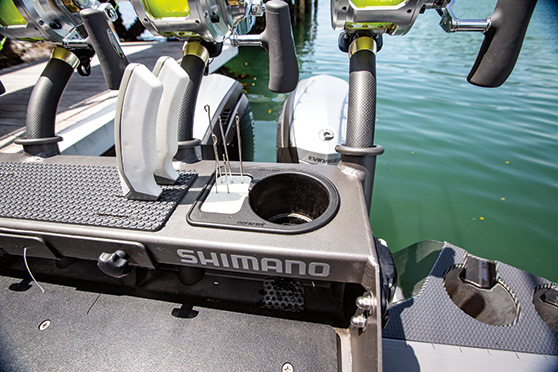 One of the best thought-out trailerboat bait stations is the one aboard Got 'Em On V, Ultimate Fishing TV's flagship.

It comes as a result of the hundreds of hours Matt spent as a professional crewman prior to kicking off The ITM Fishing Show all those years ago.

Another ‘trick’ I picked up when reviewing Matt’s smaller Stabicraft several years back was the use of a Railblaza Stowpod which he attached to the side of his bait station. He put all his smaller items of tackle – hook rigs, lures and sabikis – into it when finished with them during the day. When washing up with freshwater, he simply hosed out the tub, which has drain holes in the bottom, and its contents which were allowed to drip dry before being put away in a tacklebox. 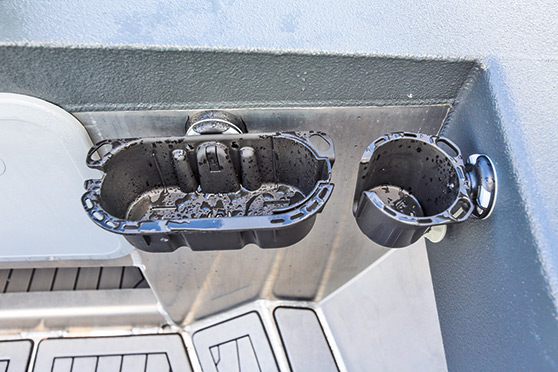 These Railblaza tackle caddies and drink holders all help to keep the ship tidy and using the Starport system, can be moved around the boat to where they are needed.

The above are just some of the many tips and tricks anglers use to keep their rigs tidy and gear stowed. We would love to see yours. Take a few hi-res images and drop me a note with your ideas at [email protected] with ‘Tidy Ship’ in the subject line.

Although NZ is classed as a temperate climate, we are lucky enough to get plenty of visitors from the tropics. During summertime, a number o... more >

Kirk Davis shares some tips on where to find fish on the jet ski in summer.... more >

John Walkley is an experienced saltwater and freshwater fisherman who has fished extensively in both NZ and Australia. In this article, he t... more >

This year, we’ve gathered some awesome gifts that are ideal for the fisher in your life, whether you’re in the Far North or the ... more >

Flat fishing for kingfish with saltwater flies is a highly technical but rewarding proposition. Here, Craig Worthington discusses how to cat... more > 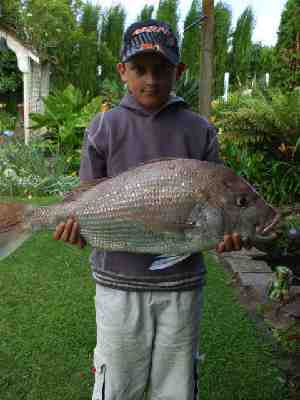