I have filleted many thousands of fish in my time, but never, ever, considered myself an expert.

Roger Dobbinson, however, is. Currently employed by Hunts Sports Store, specialising in recreational fishing tackle, he previously worked as a filleter in a fish processing plant. Apparently, he could produce a skinned and boned fillet every 30 seconds or so when up to full speed. He still has all his fingers, too.

I’m more like three minutes a fillet (especially on the big ones), so I was quick to take up Roger’s kind offer of a filleting demonstration – in return for a soft-plastic snapper-fishing session in my Stabicraft 389.

Fortunately, my end of the bargain saw plenty of gleaming subjects ‘volunteering’ to be iki-spiked and chilled in the Icey-Tek, ready for slicing up back at Hunts store.

Roger’s weapon of choice was of real interest to me, as the knife is critical to good filleting technique. It turned out to be a locally-made knife by Duel, the blade summing up Roger’s preferences.

Most obviously, at 7-8” in length, it’s not that long. That’s because although Roger likes a reasonably flexible blade that can be slid in hard against the skeleton to then follow it along, he doesn’t want the blade too bendy, which is usually the case with longer blades.

As for the Duel’s shape, the slim blade allows him to easily turn the blade over under the fillet without causing undue damage, while the rounded tip means there’s less chance of the point poking through the skin.

Made from French surgical steel, Roger says that although this makes the blade harder to sharpen, it holds its edge well. However, he still likes to give it a ‘tickle up’ every second or third fish to ensure the best possible performance. 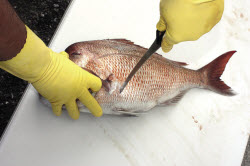 •Place the fish on a firm flat surface where you can work without stooping or crouching.

•Holding your fish by the gill cover, pierce the fish three-quarters of the way down its body, just behind the base of the pectoral fin. Don’t push the point in too far though, or you’ll slice the internal organs open. 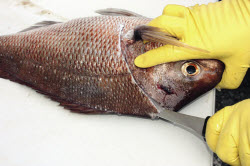 •Cut diagonally up to the top of the fish’s head; the skeleton will prevent you from going deeper than necessary.

•At the top of the body, turn the knife’s blade so it’s flat and hard against the backbone. 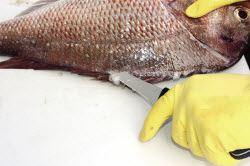 •Work your way along the backbone to the tail. Initially you’ll find the ribs prevent you from penetrating any further than a third of the way down the fish towards the belly. 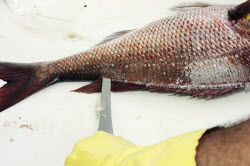 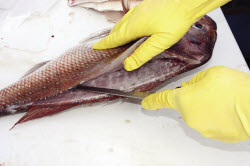 •You’ll now need to lift the fillet up so you can see what else needs to be cut away, all the way to the central vertebrae. Make especially sure that the flesh is separated cleanly from the fish’s head.

•Two-thirds of the way down the fish’s body you’ll see (or feel with your knife tip) that the ribs end, allowing you to push the knife blade completely through the fish and then slice along the vertebrae through to the tail. 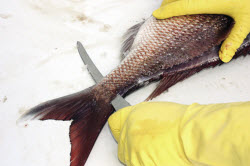 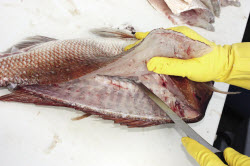 •Return to the ribs. It helps if you hold the fillet firmly and pull outwards, so the flesh rips away from the bones slightly. Now you can angle the knife’s blade so it follows up and over the rib bones from either up near the head or, as shown, from further down at the other end.

•When the flesh gets so thin it turns to skin, cut the side free of the fish. 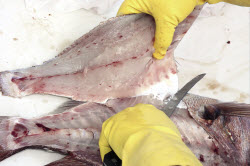 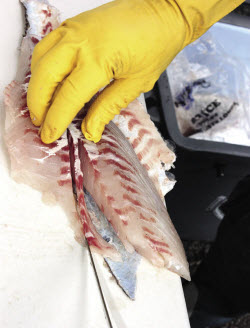 •Keeping a firm grip of the tip of the fillet, start slowly and smoothly sawing the knife along the skin working up towards the wider end of the fillet, all the while exerting slight downward pressure with the knife’s blade. If you cut through the skin, it means the knife-blade angle or pressure is too great. (Should that happen, try skinning from the opposite end of the fish fillet.) 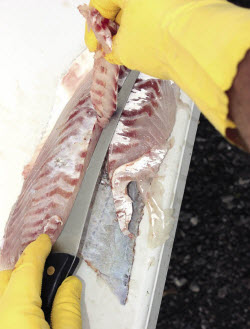 •It is usual practice to then flip the fillet over onto the skin left lying on the board. This keeps the fillet off any blood or intestinal juices on the board, and enables you to locate the line of pin bones a little easier. These bones run along the bloodier looking strip in the centre of the fillet to about two-thirds the way down towards the tail. These should be cut out, so feel for them with your fingertips to get an idea of where they are.

•I find less flesh is wasted if the first cut is made along the lower half of the fillet’s pin-bone line, but Roger obviously has no problem doing it from above.

•Repeat the cut on the other side of the pin bones, doing your best to minimise waste, as this is all good, boneless fillet. (When learning, you may want to check for any remaining bones by again feeling for them using your fingertips.) 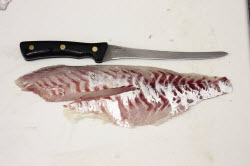 One skinned and boned fillet, ready for cleaning and cooking.
The finished fillet

Personally, I prefer filleting my catch out at sea (just make sure you keep the skeletons of any marginal fish, just in case you encounter fishery officers), so I can give the fillets a quick rinse in clean salt water afterwards. I then store the fillets in re-sealable plastic bags and place them back in the Iceytec chilly bin.

However, if the fish is processed back at home, it’s better not to wash the fillets at all, as fresh water tends to accelerate the spoiling process. Instead, wait until you’re about to cook the fish before wiping the fillets with a clean cloth/paper towel and picking any loose scales off individually (they’re shinier than the surrounding flesh, so reasonably easy to spot).

As for storage, I’m not much of a freezer fan, so I try to keep my fish in as good a condition as possible in the fridge. This involves lining an appropriately sized plastic container with two or three layers of paper towels, then placing a layer of fish fillets on top. If I have more fillets, I layer more paper towels on top of the fish in the container and repeat as necessary.

The paper absorbs the juices that accumulate over time, preventing the fillets from stewing in them and taking on an unpleasant taste and smell. Kept this way, the fillets remain in good shape for around four days, although it pays to replace the paper towels after two days.