Drogues or ‘sea anchors’ were initially developed as safety aids for boats caught in open water in adverse conditions, such as high winds and breaking seas. They usually take the form of a large-mouthed cone or parachute.

Drogues are most often deployed from the bow to hold the vessel’s head to wind (and sea) as it drifts downwind in a storm. Drogues are also used in situations where the drag they create helps to control the boat: when it is being towed for instance, or when the steering is damaged.

Drogues can also be deployed over the stern to prevent the boat from broaching while crossing a river bar. When most vessels were slow, displacement types, this technique used to be popular when working a river bar. The drag holds the boat steady and allows waves to pass under the hull, rather than picking up the boat and turning it side-on. Trailing anything over the stern is not without risks, however, as there is always the chance of entangling a line in the propeller.

Anglers generally use drogues for less dramatic purposes, their usual role being to slow the boat when drift-fishing. This lets us fish more effectively because lures and baits are able to spend more time in the strike zone.

Drogues, drift socks or sea anchors come in many forms, but the most commonly used ones for fishing are either parachute or simple cone types. Both designs work the same way, slowing the boat by dragging through the water. A hole in the middle of the parachute canopy or at the cone’s pointy end helps the drogue to run straight without spinning or yawing from side to side.

Parachute drogues tend to be larger than cone types, and their greater surface area means they do a better job of slowing the boat. They are a good choice for larger vessels, but are more difficult to deploy and there’s a tendency for the shrouds to twist and tangle if not set with care.

Cone-type drogues come in sizes to suit virtually any size vessel, from dinghies and kayaks to large launches. They are simple to set and, with the help of a trip line, easy to retrieve. Consequently, they are the most popular type with anglers.

Choosing the right size drogue for your vessel is important. Larger drogues have more braking power than smaller ones, but while a larger drogue might slow your vessel enough to fish in very windy conditions, too large a drogue is not only difficult to manage, it is also potentially dangerous in some instances. As drogues are routinely secured from the boat’s stern corner or side rather than the bow for fishing purposes, rough seas can result in water washing into the boat. Consequently, it’s better to stream even a small drogue from the bow of vessels in adverse conditions, especially in smaller craft.

Most drogues are sold as being suitable for a particular size (or size range) of vessel, say 4-6 metres or six-metres plus. But a slightly larger drogue can be a good investment if: you regularly fish in windy conditions; you wish to drift very slowly; or your boat is heavier than most or has more windage. (Hard-top boats, for instance, take more slowing down than centre-console boats because they catch more wind.) The drogues commonly used for fishing are made from various materials. Heavy-duty drogues/sea anchors are often manufactured from high quality canvas. These are sometimes made by sailmakers to order or produced in a range of sizes and sold by ships’ chandlers, usually ready to use with good quality lines and sometimes a float as well.

With a little care and maintenance, a well-made canvas drogue should give many years of service. Rinsing off salt water and thoroughly drying the canvas before storing the drogue is the key to a long life.

Less expensive fishing drogues are manufactured from a variety of materials, including woven nylon, various plastics and other synthetic fabrics. The cheapest ones have welded seams rather than stitching, and the shrouds are commonly nylon or polyethylene straps rather than lines.

Cheaper drogues generally work fine, but don’t expect longevity. Some of the fabrics degrade in sunlight, welded seams eventually fail, and the attachment points where the shrouds meet the canopy sometimes let go.

Bigger vessels have more mass than smaller ones, so exert more pressure on a drogue. Cheap drogues of lesser quality can fail under the pressure, even when used with smaller vessels if sea conditions get rough.

A drogue needs two lines: the main line, which is attached to the vessel and takes the strain of the drogue dragging through the water, and a lighter trip line attached to the drogue’s pointy end. The trip line is used to collapse the drogue and pull it in backwards. Otherwise you would have to pull the open drogue against the water’s drag.

You needn’t use the best quality cordage for drogue lines, but good quality lines will last longer and are easier and nicer to use. The main line needs to be strong enough to withstand the shock loads it will be subjected to by a drifting boat in a seaway. Big drogues should be furnished with heavier line than small ones, but a thicker line is easier to handle than a thinner one regardless of drogue size.

Polypropylene lines are cheap and float, which is an advantage in a drogue line, but they quickly deteriorate in sunlight and handle poorly. Polypropylene is especially suitable for trip lines.

Nylon lines are fine, since a little stretch is a good thing in a drogue line, but most are three-strand and can be hard on the hands. While low-stretch braided polyester lines are easier on the hands than cheaper twisted ropes, they are also more expensive.

A float is often attached to a drogue to prevent it sinking below the vessel and/or rotating, and are sometimes used on the trip line as well.

Some drogues feature weights sewn into one end to aid with opening and ensuring they always orientate the same way up.

For a drogue to work properly, you must let out enough line. Depending on the boat, this could be a couple of metres or even a boat length, but always allow enough scope for the drogue to open fully and pull through the water at an angle that’s as shallow as possible. 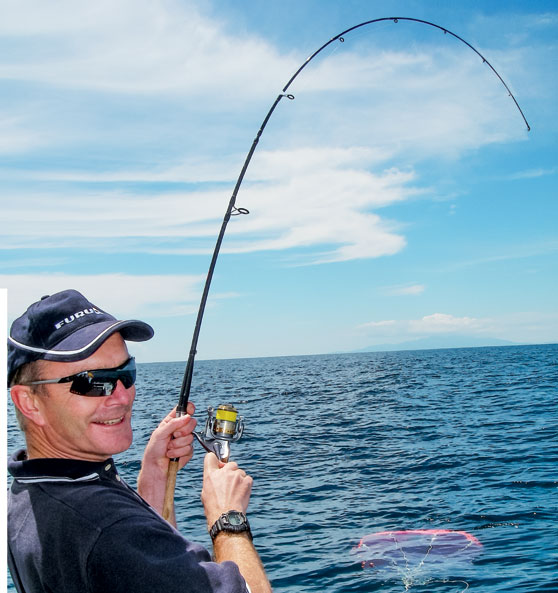 It’s also easier to fish when the drogue is set some distance from the boat – there are fewer instances of the ‘chute or the drogue lines getting in the way when fighting fish.

However, plenty of small boat operators I know set the drogue relatively short, so if they take off with one still deployed from the bow, they don’t end up in the prop! Look at my trumpet - a 12 kg Trumpter