Soft-baiting can be as simple or as complicated as you want to make it, but writer Mark Kitteridge recommends getting the key items right if you want to realise this technique’s maximum potential.

We last looked at what makes the perfect soft-baiting rod, and that’s fair enough as it’s the most important item in your soft-baiting toolbox. In this piece, we discuss its best buddy, the reel.

So, what makes the ideal soft-baiting outfit? Let me start by saying that the world of soft-baiting techniques is fluid, adaptable, personal and open to different interpretations. Consequently, the rods and reels that suit my needs may not be as good for others who have developed alternative tactics for different situations. One of the wonderful things about soft-baiting is there’s usually ‘more than one way to skin a cat’ (perhaps the chainsaw you intend using for the task might be substituted for something a little more precise though?).

In a similar vein, it will be helpful to define the intended role(s) for this rod and reel. This outfit is intended to suit casting and retrieving soft-baits in depths from one to 30 metres, but up to 70 metres is possible in competent hands.

For many years, I was more than happy with 2500-size reels. They are dinky in size, nice and light, and till very recently (I’ll explain more shortly) tended to hold around 200 metres of 5-8kg braid (which actually breaks around 9kg or more); enough to handle the biggest of snapper when properly filled to within 2mm of the spool lip. Indeed, I even managed to land two kingfish over 23kg (50lb) using these reels, so as far as I was concerned, that’s all that was needed!

But I changed my mind around three years ago after buying two of the same top-of-the-line models in different sizes – a 2500 and a 3000 – loading them with the same braid, attaching them to identical rods, and then thrashing them over a 18-20 month period. While this approach could hardly be considered scientific, both reels enjoyed roughly similar amounts of use.

I was therefore surprised that the 2500 model felt noticeably rougher and worn than the 3000 reel when wound and compared side by side afterwards, with the latter still feeling as smooth as it had been straight out the box.

However, upon thinking a bit more on the subject, this made absolute sense. After all, the larger reel’s correspondingly bigger gearing and drag-system components mean that when similar amounts of pressure are exerted on the respective reels, the larger reel distributes the forces more effectively, resulting in less wear and tear, while the smaller reel is pushed closer to its limits so suffers more over time. That’s why I changed to reels in the 3000 size – and even one 3500.

My views on 4000-size reels remained unchanged though. I’ve always considered them unnecessarily big, heavy and cumbersome for most soft-baiting duties (unless fishing in deep-water situations where kingfish are commonly encountered). 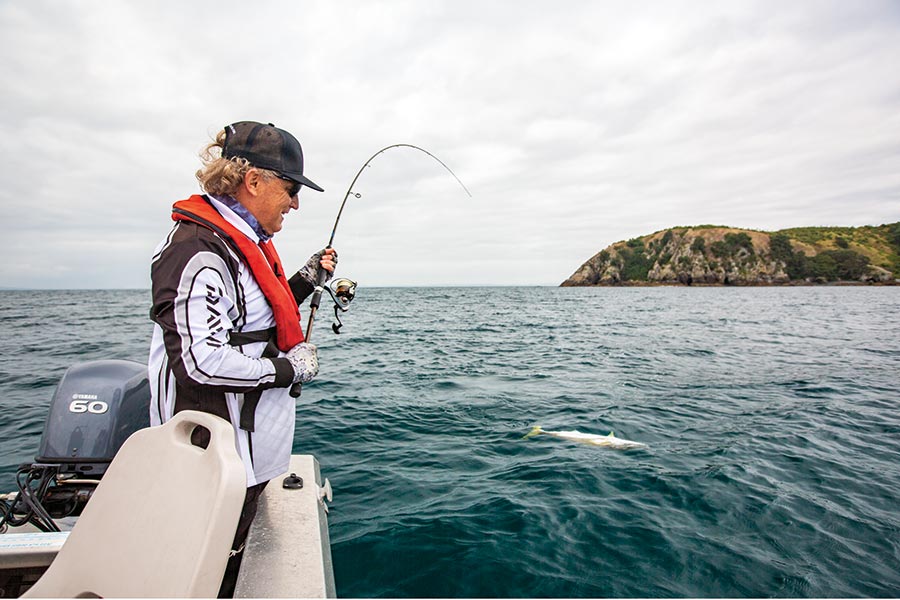 In the past the writer considered 4000-size reels to be an overkill, unless kingfish are a regular by-catch when fishing deep water. But not so much now...

However, to bugger things up again, some of the reel manufacturers have cleverly managed to reduce their latest reel models’ body size, so some of the 3000-size reels look closer to the 2500 size models now, while the 3500- and 4000-size reels are looking smaller and much more doable now!

This muddle means we should probably forget the various reel-model numbers and go by line capacities instead: for me this currently means approximately 250 to 350 metres of 6-7kg braid (as braid is notorious for over-testing, these poundages generally equate to around 20lb actual breaking strain).

In addition to these bigger reels lasting longer, the larger spools offer two significant advantages. Firstly, they can cast further. This is due to the bigger spool circumference, which sees the line level decreasing more slowly, so less friction is generated as the line is dragged up and over the spool lip during the cast. Reduced friction means less wasted energy, resulting in longer casting distances. 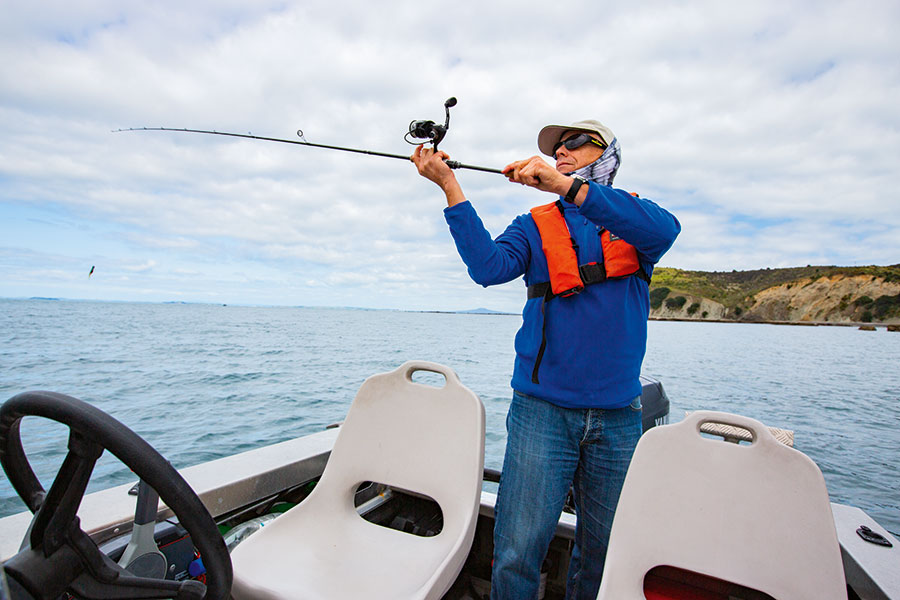 A larger spool sees increased casting distance due to less friction, thanks to the line level going down more slowly.

Secondly, the larger spool circumference also sees more line retrieved with every spool rotation. This potentially allows anglers to wind in particularly fast when using a reel with a high-speed retrieve ratio (around 6:1 say) if that’s important to them, or to cut back on the ratio a bit (e.g. 4:1) for extra winching power and, usually, a longer-lasting gearing system/reel because the gearing teeth are bigger. Personally, I find around 4.8:1 to be a good compromise.

The reel’s overall rigidity is another important aspect. Some reel frames are surprisingly flexible, so the reel bends and moves around under the rod when being wound under pressure. In addition to being very annoying, the twisting frame means the gearing inside can become misaligned with the gearing surfaces no longer meshing properly, leading to uneven and premature wear.

To test your reel for rigidity, place it firmly on the rod and twist it from side to side with your hand. You’ll soon discover whether you have a good one or not!

Also, don’t be fooled into thinking that more ball bearings equals a better reel. Unless they are of a particularly high quality and are placed in the right places, they’re more a liability than a positive feature. Yes, they might make the reel feel smooth initially, but douse them in saltwater and try them out again after storage over the winter, and it’s usually a very different story. Substandard ball bearings placed in poorly protected locations will lead to rust, seizures, and lots of noise when the handle is wound!

Finally, I strongly recommend buying the best reel you can afford – but more than you can afford is better still! While you may not fully appreciate it (unless you’d bought a cheaper reel first!), experience says you usually get what you pay for, and when it comes to a small reel taking on lots of tough-fighting fish, it better be dependable!