Mark Kitteridge continues to discuss some of the diverse roles played by the humble hook, and how to get the best from these relatively small but essential items when gamefishing...

It can be easy to forget how important specific hook size and style are when faced by the size and power of large marlin, tuna and sharks. However, the rules remain the same: hooks are determined by the size of the lure/bait and the strength of the tackle involved.

This topic will always be a hotly debated one and, to be honest, as I only spend a handful of days trolling for gamefish these days, possibly I’m not the one to be suggesting what game fishers should do. That said, I still catch my share of marlin when out on the water, so my strategies and beliefs seem to work okay.

I believe the Mustad 7691S/7699-DT hook shape is the best candidate for the job, with the emphasis being more on the shape than the brand (not that Mustad won’t do the job for you!).

The reason why is primarily due to how this hook’s gently inward angling hook point behaves when pressure is placed directly onto it, remaining nicely in place to progressively penetrate tough bills and mouths after the initial strike.

Compare the 7699-DT with the other popular shape, the Mustad 7732, a hook with a point that’s parallel to its shank. Exert downward pressure onto this hook’s point when it’s free-swinging and you’ll see it tip back and displace the pressure, so it’s less likely to hook up effectively. That’s why most advocates of this hook shape set this hook firmly in place with electrical heat-shrink tubing, so the hook point stays put when downward pressure comes on. 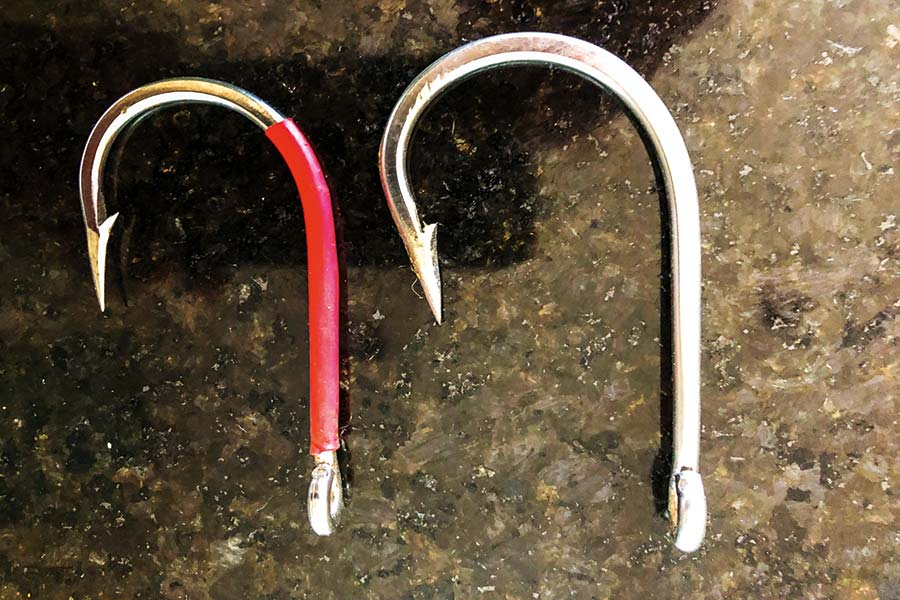 Incurving and parallel pointed hooks. The writer prefers the incurving model as it stays in place when pressure is placed on it.

This is a tricky one, as there are big advantages and disadvantages for both options.

Light-gauge hooks: This hook style’s finer circumference equates to less weight so lures aren’t hindered as much in the water, enabling them to retain more of their full potential movement. And, thanks to the finer diameter, their typically sticky-sharp point, they’re more likely to find a secure hold with less pressure.

On the downside, they don’t have as much structural strength as the traditional heavy-duty game hooks, so big fish and/or brutal drag settings can see these hooks fail – often at the worst time when a marlin’s close to the boat and about to be tagged or gaffed!

Also, the reduced drag settings sometimes used to ensure these hooks stay in place can result in prolonged fights and the fish arriving boat side exhausted, making them harder to successfully release and more prone to shark predation.

Another plus though, due to the emphasis on ‘tag and release’ for many anglers these days, is that a hook which straightens or breaks before the fish is brought boat side is not necessarily considered a failure, especially if the fish has been seen beforehand and a good display of jumping has been enjoyed. In fact, some purists argue that these premature releases allow the fish to avoid many of the injuries that commonly occur boat side during the tracing and unhooking procedure. In fact, excessive pressure is often placed on hooked fish when near the boat to help the hook bend out so the fish can escape relatively uninjured.

Heavy-duty hooks: No doubt about it, if your gig is targeting the biggest fish on tackle heavier than 24kg, then heavy-duty game hooks are for you. Typically made from stainless or carbon-steel, these hooks are built to handle the long, hard runs made by powerful fish, and survive the often-brutal pressure exerted by deck-hands as they struggle to control and subdue active fish on the leader.

However, these hooks are quite weighty and can affect the way the lure swims, so it’s important to choose a suitable size that doesn’t ‘over-hook’ the lure. In addition to hindering the lure’s movements, overly large hooks are easier to see and harder to set. 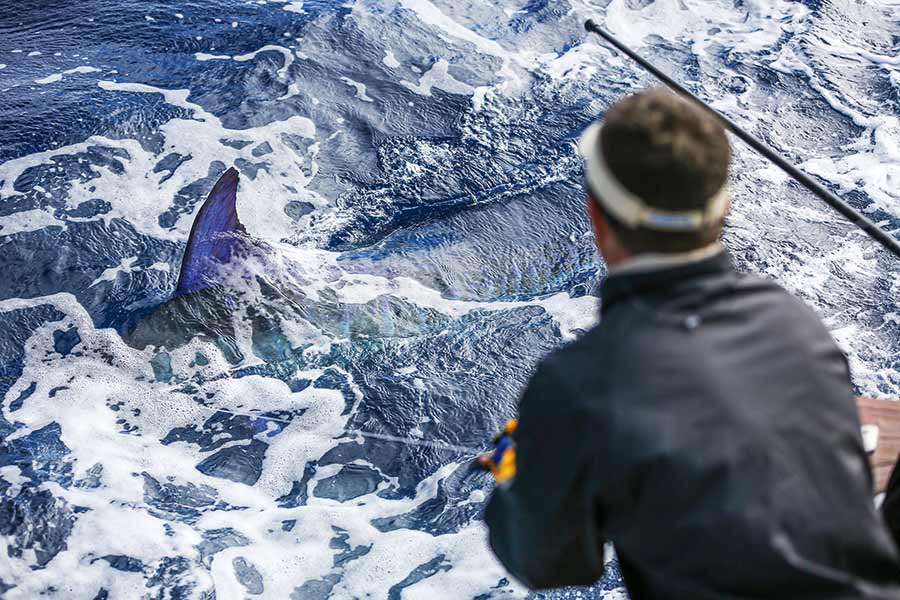 While light-gauge hooks have an excellent hook-up rate, the heavy-duty models come into their own when targeting bigger fish with heavier gear.

I really don’t like double-hook rigs (although they can provide some valuable extra insurance when using light-gauge hooks). Double-hook rigs have the unfortunate tendency to foul hook the fish in areas further back, including their eyes – for a predator that relies on sight to catch its prey, this is most likely a death sentence. Dual hooks can also snag anglers trying to unhook thrashing fish.

That’s why I prefer one, slightly bigger hook, set well back in the skirt, with just the hook’s curved base remaining exposed at the rear of the skirt. Thanks to the shank’s weight, a single hook naturally rides point up, an inclination that can be utilised by jamming angle-faced lures in place with toothpicks or onto tightly wound rubber-band wedges, so they always emerge onto the surface with the hook point facing upwards. (Note: some brands have rig locks in the lure’s head to simplify matters.)

This rig seems to catch every bit as well as a two-hook rig and is potentially kinder to all creatures involved in the hook-up and ensuing battle. The writer prefers a single-hook rig on his lures; note that just the base of the hook hangs below the skirt.

There are lots of theories regarding this, but I suggest selecting a hook that allows the lure head to slip snugly through the gape, or nearly slip through. Those determined to still use two-hook rigs should go with a size that almost sneaks through, or sluggish lure movements will likely result.

As already mentioned, most game hooks are made from stainless or carbon steel. Stainless products stay in good shape, so don’t deteriorate much, and won’t discolour your lures and storage systems. They are also better for fish that manage to escape. Contrary to common opinion, a pure metal like stainless steel won’t slowly break down and feed toxic materials into the bloodstream like most alloys will. Instead, they usually stay where they are at the front of the mouth or in the bill, where a protective layer of skin sometimes develops around the hook, or conversely, the hook hole becomes irritated and enlarged by the foreign object, allowing the hook to fall out.

On the downside, stainless hooks can fatigue over time and suddenly break or bend out.

As for carbon-steel hooks, they are usually stronger and can be covered in various coatings to make them more resistant to corrosion, or very slippery, so they slide into bills and mouths more easily. Even so, need more maintenance, often corroding where the coating is removed.

Getting to the point

Few game hooks are sticky sharp straight out of their packaging; they should dig into your thumb nail with very little pressure. A Mill Bastard file generally provides good results, especially if you follow these guidelines: 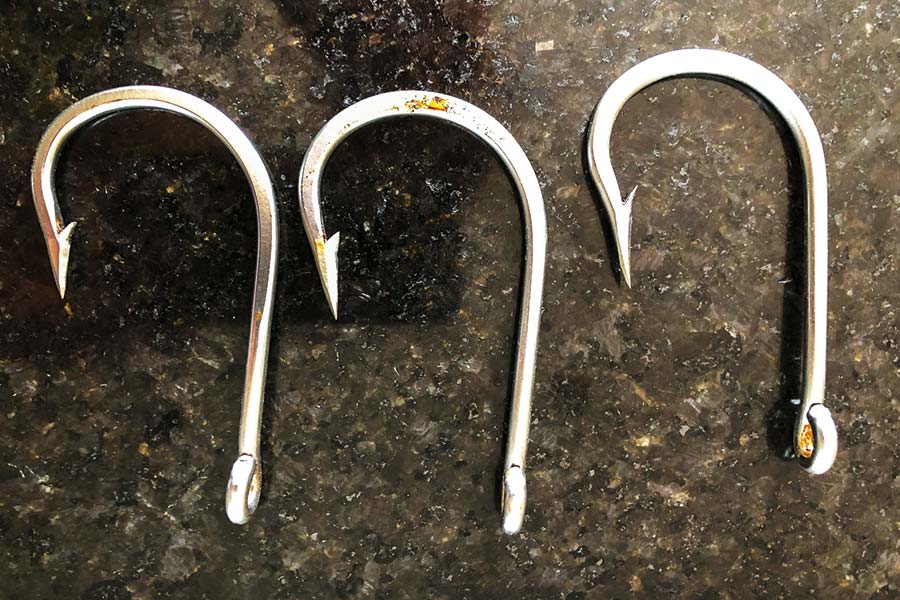 A hook straight out the packet, followed by a sharpened one, with the third hook illustrating a shorter, fatter point that indicates it's near the end of its life.

The idea of incorporating shackles in game-hook rigs is genius, enabling a relatively small number of hook rigs to be chopped and changed quickly and easily between multiple lure rigs. It also allows single or double hook rigs to be changed if the angler wants to.

My own adaptation of the idea has a big advantage as it does away with the multi-strand wire trace which tends to fatigue over time, and either falls off – especially when active angle-faced lures are used – or is smashed off on the strike!

Yes, you might lose the occasional hook to a mako, but the doubled and twisted jack trace never fatigues and means you only need to add a single hook to each rig. 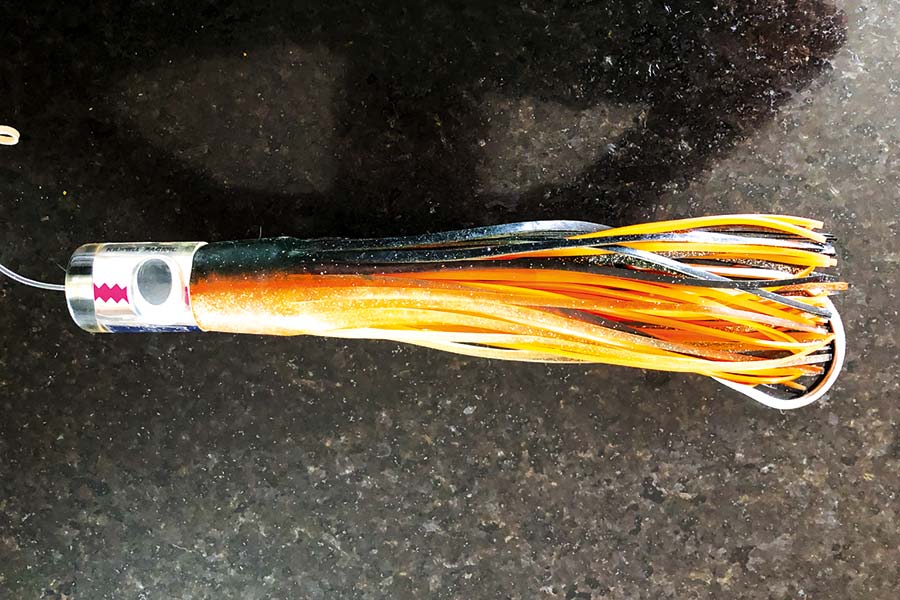 The writer has adapted this way of rigging his lures so there's no need to worry about a fatiguing wire-jack trace. This also allows the single hooks to be packed separately so they can be swapped around as needed on the various lures' shackles.