John Eichelsheim has caught no shortage of fish with the help of his old Lowrance fish finder, but after 13 years of use, he’s finally decided it’s time for an upgrade. After doing a fair bit of research, John has narrowed down his options to a select few units…

My 4.6m Stabicraft Frontier will be 13 years old this year. It has been a great little boat and I have no plans to replace it, but some of the accessories are starting to show their age.

My old unit is a Lowrance LCX-27c, bracket-mounted on the Stabi’s side-console with a bit of protection from the windscreen. The boat lives outside but is usually covered. When I bought it, I set it up with the best electronics I could afford and for the most part, like the boat, they have served me well.

The fishfinder/GPS/chartplotter works as well as it ever has – I can get a solid bottom reading at 30 knots in 25 metres of water with a transom mounted transducer – but the flush-mounted VHF knobs have seized solid. It’s time to upgrade to a modern multi-function display (MFD), but what to replace it with?

I spent around $3K on electronics when I first set up my boat and I’m prepared to shell out a similar sum for the upgrade. You get considerably more for your money these days, but there are so many different functions and features on offer! Which do I really want (or need)?

Apart from getting a VHF radio that works, I’m looking forward to experiencing the benefits of the latest sonar and charting technology.

The colour 7-inch LCD display on my old unit, which is actually a 2007 model, can be difficult to view from some angles and I usually operate it in backlit ‘night’ mode to see it better, even in daylight. Compared to modern MFDs, it’s relatively low resolution (although it was very good for its time) and the display only takes up part of the unit, with a keypad to one side and a substantial case framing the screen, rather like an old-style tube TV.

The sonar performance is good, but it’s an analogue unit so it lacks the level of target discrimination modern digital CHIRP sonar units provide. It doesn’t have any of the features found in today’s premium sounders either, such as various imaging modes, called by different names by different manufacturers, or a variety of display modes, sometimes including 3D.

Compared to my old Lowrance, modern digital broadband sonars are much more sophisticated in the way they process, interpret and display sonar returns, providing users with much more powerful fish-finding and bottom imaging tools.

Charting has improved too. Different manufacturers offer their own proprietary charting and/or charting from third-party specialists such as C-Map, Navionics and others. In many cases software updates can be undertaken online – most have WiFi functionality. Some systems even allow users to build their own charts and share them online with other users, so as to build collaborative composite charts of areas they regularly fish.

VHF radio functionality has come a long way in 13 years too, but whichever brand I decide on will be a fairly basic unit – I’ve only used my old VHF half-a-dozen times since new and I also carry a back-up handheld VHF in my emergency grab-bag.

I mostly fish for snapper, kingfish and other inshore species in the Hauraki Gulf, predominantly with soft-baits. I particularly enjoy soft-baiting in the shallows and seldom fish deeper than 50m, except for the occasional jaunt up north where I might target a few deeper reefs for kingfish.

Side-imaging, 3D and various other brand-proprietary (but functionally identical) display modes are desirable in my replacement MFD, along with high-resolution, daylight viewable displays and, of course, effective weather-proofing for use on an open boat. Deep water performance is less important.

The size of the display will be dictated by the space I have available and what I can afford. A flush-mounted display is not an option, though the new VHF should be able to slot into the existing cut-out.

My current transducer is a 600W model, and given the fishing I do, I’ve never felt the need for anything more powerful. But I am keen on the new imaging options, so a new transducer will be part of the package.

In most instances, explained Lusty & Blundell’s Adam King, you are better off getting a new all-in-one transducer which offers a number of different imaging modes in a single package.

“This has many benefits other than value for money. It reduces the space needed on the transom to mount transducers, which allows a single transducer to realise its best performance, rather than sacrificing performance due to the placement of other transducers,” Adam explains.

Most companies offer transom-mounted and through-hull transducer packages differing in imaging functionality and power. For my purposes, a transom mount on a folding bracket to avoid damage when beach launching the boat is the most practical option.

Bang for your buck

$3000 is a decent budget and every major marine electronics supplier has several suitable offerings. I could probably replace my electronics for a lot less money and still get better performance and more tech than I enjoy currently, but for around $3K I can expect to benefit from the very latest technology and a raft of features which simply weren’t available 14 years ago.

There are a couple of factors you need to take into account when researching marine electronics, online or in-store. Listed prices are often for the MFD only – the transducer is generally extra, along with various imaging and signal processing modules and charting software/cards. GPS antennae may be extra as well, though antennae are built into some units. Most MFDs at this price are expandable, with many add-ons available, including radar and autopilot.

Mine is a small boat, so there’s limited room on the side console. My old Lowrance is 9.5-inches (24cm) wide. While I could fit a bigger MFD than I currently own, a 7- or 9-inch display is probably the best option, especially if I have to leave room for a GPS antenna. A Garmin Echomap UHD 75sv with a 7-inch display is only slightly wider at 9.8 inches (25cm).

MFDs are labelled by screen size, measured diagonally, but their cases are wider. The price ramps up with screen size, so a 12-inch display is probably not only too big, but also too expensive. 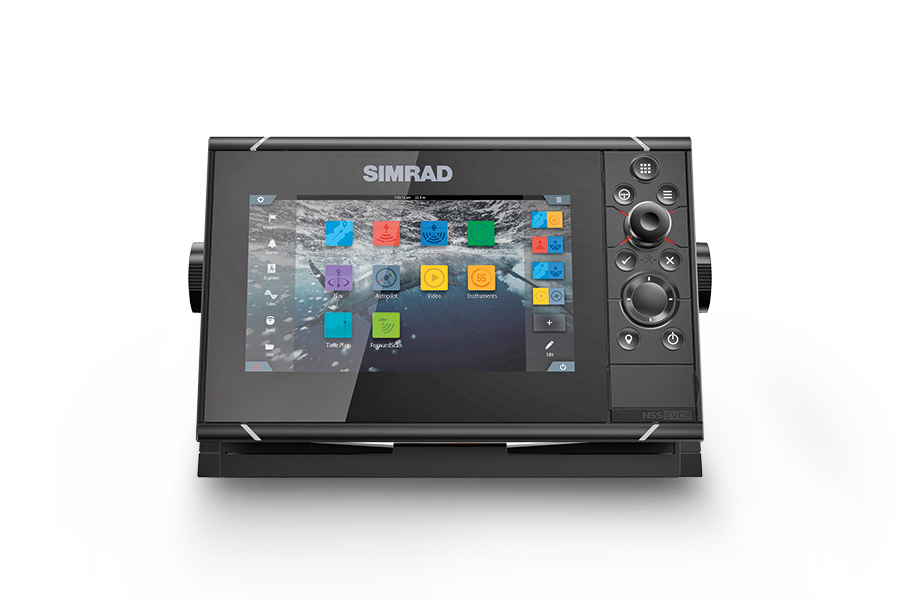 This model has integrated ForwardScan (forward looking sonar), StructureScan HD and dual-channel CHIRP sounder technology. WiFi is also built in, giving access to Simrad’s GoFree online services, smartphone monitoring and the ability to extend your display to a tablet. NMEA 2000 connectivity is also included, along with C-Map and Navionics trip planning and auto-routing support.

The base unit is listed at $2089, but once I add an all-in-one transducer and a Navionics Platinum chart as Advance Trident suggests, I’m looking at $2689, which still leaves me $300 for a new VHF.

I’d like StructureScan 3D and broadband sounder functionality, too, so all up I should be pretty close to $3K (I’m prepared to compromise on the VHF). 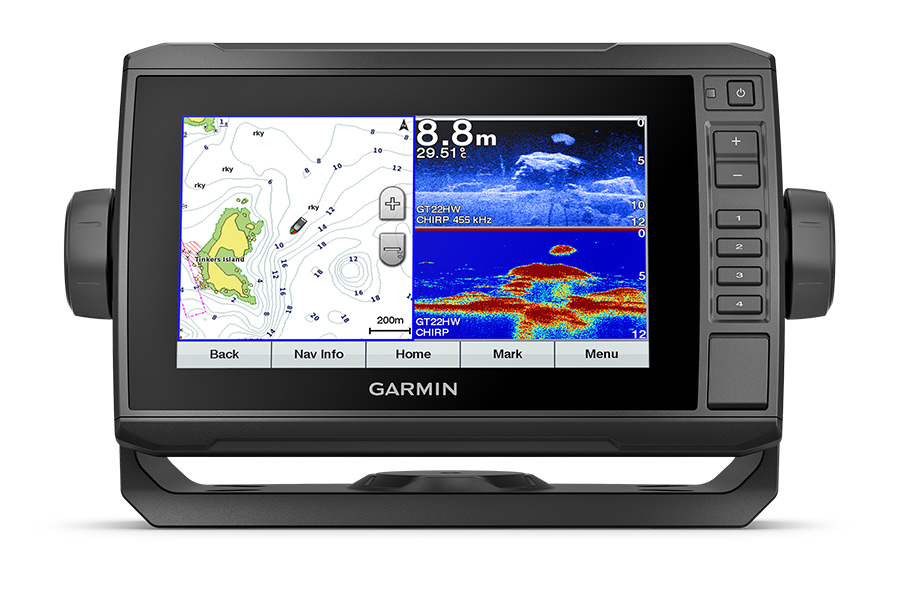 Garmin has plenty of options, too. At around $1,700, Garmin’s Echomap range fits my requirements. Sticking with 7-inch displays, the Echomap UHD 75sv supports a number of Garmin transducers, but is supplied with an all-in-one GT54 for Ultra High Definition ClearVu and SideVu scanning sonars, plus CHIRP for excellent target separation.

Pre-loaded with New Zealand charts, it has an internal GPS aerial and Quickdraw maps for personalised mapping functionality. Upgrading to Panoptix LiveScope scanning sonar requires a special transducer and an additional module, which would add another $1,500 to the price and leave no cash for the VHF! 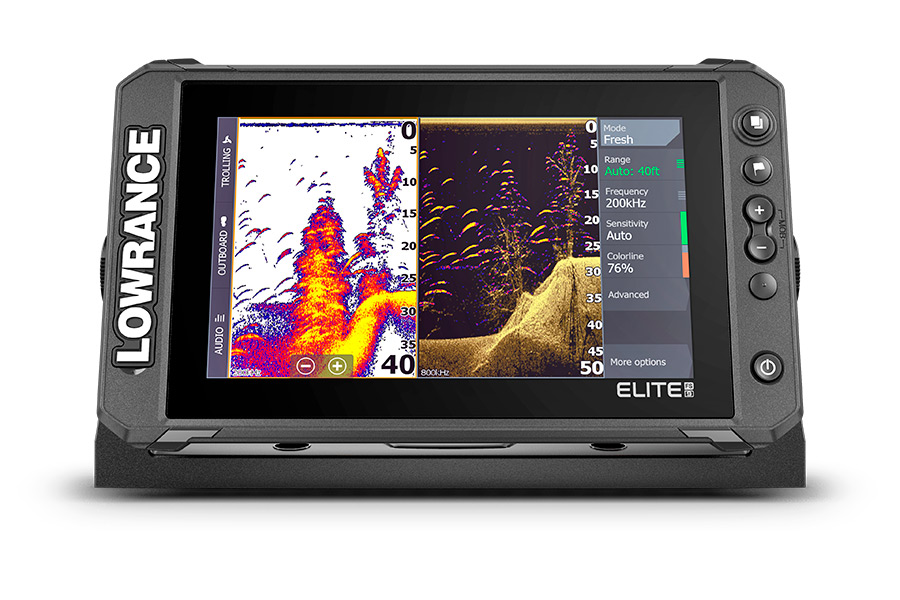 Sticking with Navico, Lowrance’s just-released Elite FS 7 and FS 9 displays might fit the bill. The FS is the most powerful Elite so far with a high-resolution SolarMax touch-screen display, built-in Genesis Live real-time map creation and a 3-1 transducer. WiFi, NMEA 2000 and Ethernet connectivity are included and add-ons include Halo Dome Radar and Outboard Pilot.

Configurations include high-resolution Active Imaging 3-1 sonar, featuring CHIRP, SideScan and DownScan imaging with Fish Reveal ($1,929, 7-inch; $2,279, 9-inch), or adding another $2,619 to the price for the full package with ActiveTarget Live Sonar.

ActiveTarget Live Sonar tracks fish as they swim in and around cover but requires an additional module and transducer. It’s well beyond my budget. 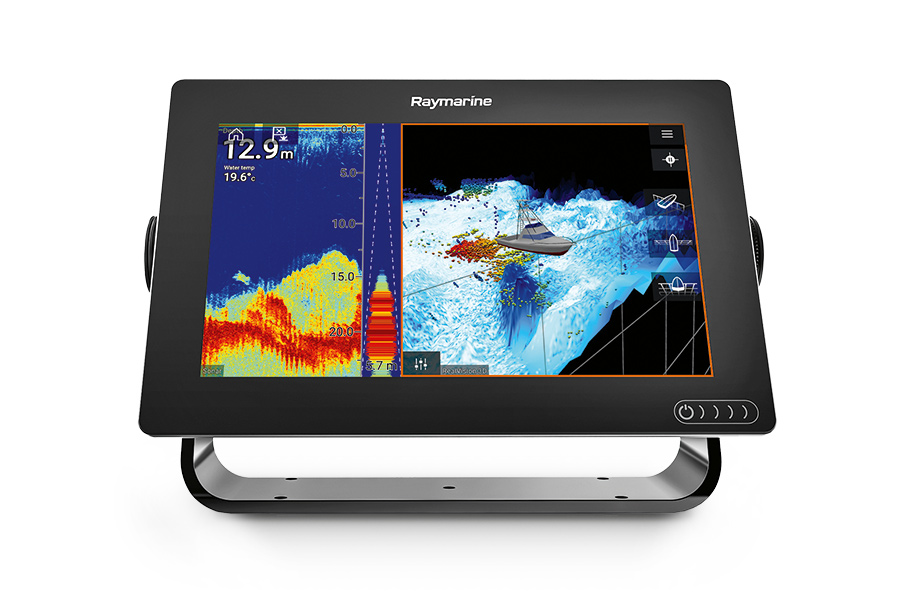 Adam King and the team at Lusty & Blundell, New Zealand agents for Raymarine, recommended I invest in DownVision, SideVision and RealVision 3D for a much better understanding of what lies beneath the water’s surface.

Suitable Raymarine MFDs that fall within my budget include models in the Axiom and Element ranges.

The GPS receiver is built in and charting is supported from C-Map, Navionics and Lighthouse Raster. Axion is expandable with radar and network capability via Raynet Ethernet and NMEA 2000. Built-in WiFi allows control from a smartphone or tablet.

An Axiom 7 RV, with an RV 100 transom-mounted all-in-one transducer and a Navionics MSD chart, is listed for $2,649 on the Lusty & Blundell website.

Alternatively, I could go down the Element route. At $1,179 for the display only, the Element 7 HV is cheaper, but requires an external GPS aerial. 1.2 megahertz HyperVision sonar provides superb resolution to 33 metres while 350kHz Down and SideVision delivers lifelike imaging to 200 metres. Built-in RealVision 3D sonar reveals channel edges, ledges, weed banks and contour changes and the unit is expandable with radar, autopilot, AIS, vessel systems and more via NMEA 2000. 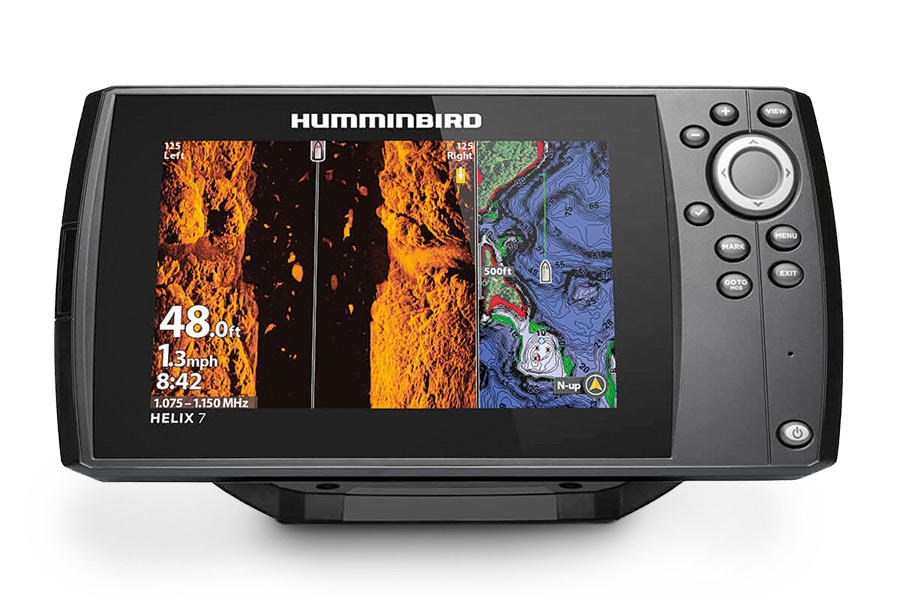 Other options include Helix 7 and Helix 8 packages from Humminbird with dual-spectrum CHIRP, plus side and down imaging and the Furuno DB-7 with Bluebeam technology from Electronic Navigation. Starting around $1579 for the Helix 7 and $1,120 for the Furuno DB-7, these closely match similar products from other manufacturers in performance, features, expandability and price once the accessories are included. The Furuno supplied with a NZ chart and a CHIRP TM150 transducer is listed at $1,739 plus GST on ENL’s website.

Although most of these products can be successfully installed by a competent DIY-er, Blair Geldard at Advance Trident recommends getting a professional installation for optimum performance. That is the track I will go down.