Nothing beats doing it all yourself. The excitement and satisfaction of learning something new, getting out there and giving it a crack, learning from the experience, and achieving the result you set out for is without equal. I think it’s part of the Kiwi way.

Over the years I have really developed a love for live-baiting and switch-baiting for billfish. I love the hands-on feeling of rigging, pitching and – most satisfyingly – hooking the fish myself. The teamwork involved in raising, teasing and switching out the dead bait in front of an angry, lit-up marlin is, of course, another great aspect of this method.

For many years, while targeting billfish overseas, we relied on the ballyhoo and split-tail mullet as our stable source of dead bait for swimming pitch-baits. Since moving back to New Zealand a few years ago, I have been experimenting with our local baits to see what would be a good replacement. I used jack mackerel for a while, but really struggled to get them to swim well due to their short stubby profile and the shape of their head.

A few years back, Matt Watson came and fished with me in Mexico and was impressed with how we prepared and ran our ballyhoo swim and pitch baits. Later that year, I fished with Matt back here in NZ and he was stoked to show me how he had achieved the same result with the good old NZ piper. Matt, being a get-in-and-give-it-a-go Kiwi, put a whole lot of thought into how to make the fragile piper into a good pitch bait. I have to give him credit for the piper pitch bait we now use today. The other bait I really love is the yellow-eye mullet. It has a really nice profile, is tough as hell and swims great.

We are really lucky here in NZ to have sheltered harbours that are home to two species that make great pitch or swimming baits. I am very fussy on how I catch and process my bait, opting to catch it all by hook. I am not a big fan of netting – I do not like the damage it causes to the bait or its potential to kill or wound unwanted/non-targeted species in our fragile harbour environments. I want my bait harvesting to be sustainable, and I only catch and prepare enough bait for a few marlin trips at a time.

After a bit of hit and miss, I have now worked out a few areas in my local harbour where I have a reliable source of both piper and yellow-eye mullet. For both species, berley is required to bring them within striking distance of the boat, but the way we hook them is different. For piper, I use a small float, 8lb leader and a very small hook with a small piece of pilchard or skippy for bait; for yellow-eye mullet, I use a lightly baited sabiki rig with size 10 hooks. Once you have your bait to the boat its every important not to touch the fish – we always use a de-hooker to ensure we keep the bait in the best possible condition.

The first and most important step to preserving and brining your bait is to get it into a brine/ice slurry solution immediately. This will keep your bait strong and natural-looking. The last thing you want is to be over-handling the fish or letting it flop around in a net or on the deck, both of which could damage the bait’s protective layer of scales.

If I were using a 15-litre Icey-Tek cooler bin, my typical brine recipe would be 2.5kg of salt ice, two litres of salt water, ½ cup of sea salt, and a heaped tablespoon of baking soda. The ice slurry chills the fish instantly and stops bacteria forming on the skin; the salt toughens the skin and firms the scales fixing point; and the baking soda brings out and retains the natural colour in the skin.

The gear required to rig fish using this method is as follows:

• Scissors and cutters for cutting floss, the beak off piper and pectoral fins off baits.

• De-boner for removing eyes and de-boning mullet if necessary.

• Closed eye needles for stitching and removing eyes from smaller baits like piper.

• Chugger heads to sit over the head of the main bait for increased action and pop of your swim or pitch bait. You can use the small plastic tube at the front of the lure to separate the circle hook from the face of the lure for a better hook set. 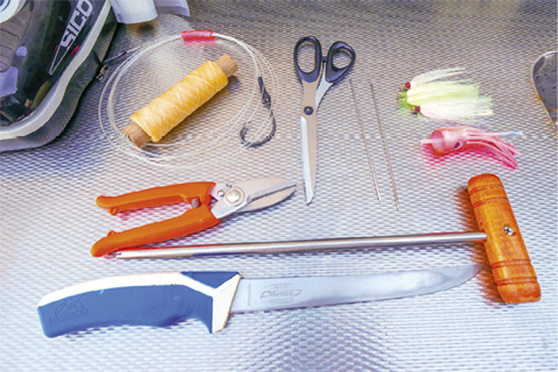 The tools needed for the job.

Once the baits have brined for a couple of hours, you can now start preparing and rigging them.

Now it’s time to stitch up the fish and create a towing point.

The next step creates the towing point. We take one of the tag ends and push it up though the top of the head with a needle so we now have one tag end at the bottom and one coming out the top of the head of the fish. We can now tie both the tag ends together on the nose of the fish, which keeps the mouth closed and gives a good central tow point. I like to slide a chugger-headed, small rubber lure over the head of the fish for added action. When attaching the hook, we just do two-or three overhand knots over the hook with some separation between the lure head and the hook – this helps with a better hook set. 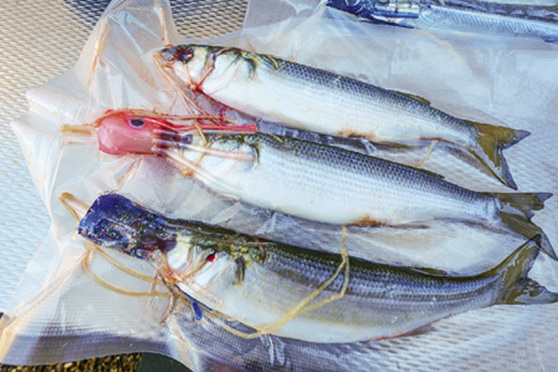 Once rigged, the baits can be vacuum-packed and frozen for future use.

If I am not going to use the baits straight away, I like to sprinkle them in sea salt and vac bag them in lots of four. These bags go into the freezer until I am ready for my next day of marlin fishing. Because they have already been brined, they are well preserved in the freezer.

Attach your hook rig, wait for a marlin to pop his head up and swallow your bait and enjoy the satisfaction of catching, preparing, rigging and hooking a marlin on a bait you personally prepared!