Living in Auckland and predominantly chasing snapper, my mates and I concentrate on jigging for kingfish when heading north. We usually make two annual trips, each of five to six days, one in October, the other in February.

There’s a spot that produced some solid greenbacks for a decade, but over the past couple of years the fish appear to have gone. I’m unsure whether it’s been over-fished, the baitfish have moved on, or the kingfish have just relocated.

So, with kings getting harder to track down each year, we have reverted to chasing big reds, and also like to prospect for various types of reef fish such as parrotfish, pigfish, granddaddy hapuku, porae, red snapper and big blue cod. Over the years we have noticed a big increase in these reef fish numbers – we have even had a great trip catching all the above, plus big tarakihi, in 20m of water straight off Tokerau Beach.

A couple of spots have produced some solid reds over the years, but with a mint forecast on the cards during our February Far North trip, we decided to adventure to new territory further up the coast to an area well known for big fish.

Upon arrival, we were told it had gone a little quiet in the past week or two. However, I still wanted to open up the Honda outboard and take the Osprey for a good run, so we geared up to go a little wider for the day. I wanted to prospect some new ground and drift through the day, dropping a mix of soft-baits and micro-jigs, as well as trying a few smelly baits of course.

The next morning, before the birds were up, we were on the water and running along the coast for about an hour. Birds were working all the way along and there was no wind, so we stopped occasionally to drop a few Gulp! soft-baits and jigs for a bit of fun. I was using a five-inch soft-bait and it got smashed every drop, but most of the other lures produced too, resulting in a mix of snapper and various other species. 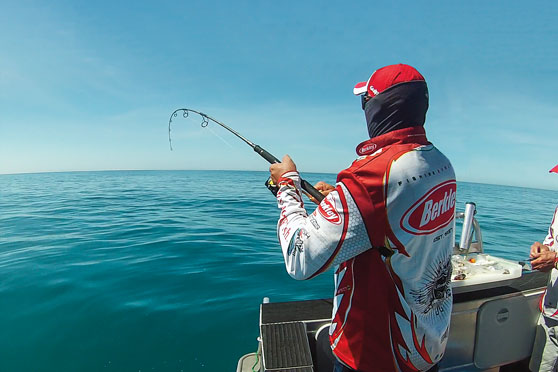 Eventually we found another spot that appeared to be holding some solid fish. I am a firm believer of the motto ‘big bait, big fish’, and my biggest snapper have all fallen to this method. However, on this occasion I continued using the five-inch Gulp! and was the first to hook up to something big – and if it was a snapper, it was an absolute donkey!

This thing was pulling a heap of string, making my little Penn reel sing a nice tune. Meanwhile, my rod remained deep bent throughout the whole fight – something hasn’t happened for quite some time.

Finally, after 10 minutes of string pulling, a bit of stalemate and finally gaining a bit of line, I got a glimpse of it: a monster red! I couldn’t believe something that big would eat a five-inch Jerk Shad the size of my little pinky!

This solid red measured out at 89cm long and was 40cm deep; after getting a couple quick pics and holding it in the water for a while, I watched it swim away strongly.

Pea was next to hook up, but this time on a little 28g jig. His rod was buckled like a horseshoe and his reel was singing the same tune. It was hard to hold back our excitement and we let loose a couple of yahoos on some of the bigger runs.

Ten minutes later we had the beast netted and once again it was of monster proportions – it just about wouldn’t fit in the net! With a quick measure at 90cm and 45cm deep, we got a few pics then got it back in the water. Pea held it for a good five minutes and eventually feeling it kick, he let it go and it powered away back to the depths. 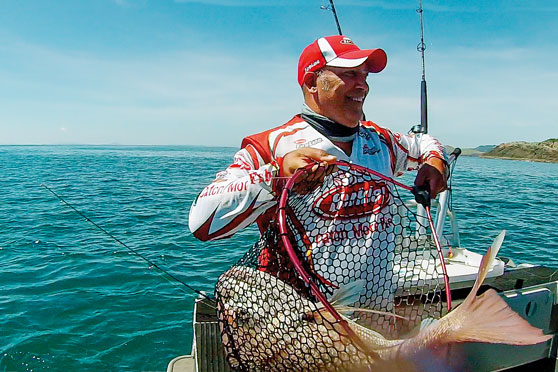 We fired up the outboard and retraced our steps to set up for another drift. We caught a few more nice snapper around 7-8 kilos and then decided to move on. The day was still young and I wanted to try a few different places.

After another 10-15 minute run along the coast we once again came across a nice piece of foul with sign all over it.

I dropped the little soft-bait again, and it was was instantly smashed. It was another stringpuller and next minute I heard Pea yahooing behind me – he was hooked up again too.

After a few minutes we both boated another couple of solid reds, one at 92cm the other 87cm. After a few quick pics they were released and powered away. Magic!

Through the rest of the day we fished half-a-dozen spots all of which produced. We managed to boat four or five solid reds and we lost a couple we just couldn’t stop! The great thing was we were able to put them all back to fight another day.

Pea’s best snapper nearly had the rear wheels removed by a mako but we got it up in one piece and send it back home when the shark had vanished. We also caught a few interesting reefies, which is always fun to do while in the north.

What a day it turned out to be, with some ‘epic’ soft-baiting and micro-jigging for some monster reds. I’m hoping it will be like this again on my next Far North adventure! 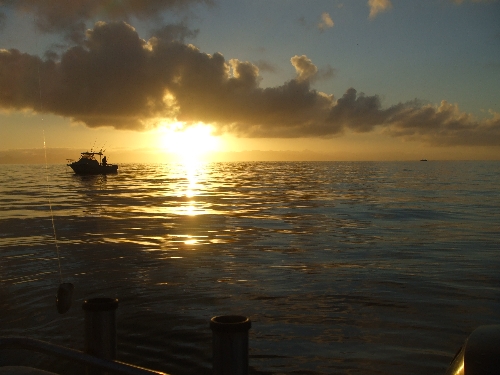