Caring for a kayak catch

Most anglers take pride in looking after their catch to ensure it reaches the table in prime eating condition. Chilly bins with salt-ice slurry are ideal for boats with enough deck area to store them, along with everyone’s catch. The kayak, with a smaller deck area, requires a bit more consideration.

Just like on a boat, a kayak system also needs to provide storage and somewhere to cool down the catch. Certain parts of the deck are usually utilised as catch storage, but some kayak designs also have built-in storage. Most popular roto-moulded fishing kayaks have a rear well area that is the ideal place to store the catch. 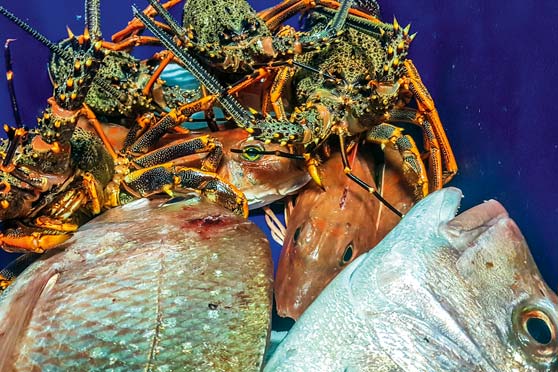 A suitable container to store the catch should be made from a material that offers insulation against heat. Smaller chilly bins can be used but their small size limits the amount of catch storage, and it’s difficult to find one that fits the rear well. The other limitation with chilly bins is their higher profile. When loaded with seafood and ice, they can cause stability issues.

A purpose made PVC cover with foam insulation solves the stability issue and converts the rear well into a catch containment area. However, the protection is less effective at keeping the catch cold due to the proximity of the uninsulated plastic deck area and the sea under that. Modern storage solutions offer improved performance. They include insulated bags and ice bins custom-made to fit a kayak’s rear well area. Both these cooler types have advantages and disadvantages, so making the right choice will come down to personal preference.

The ice bin or pod provides effective insulation but can add quite a few kilos to the kayak. They also protrude above the deck of the kayak, causing wind drag. On top of this, the door or lid of the bin should seal adequately to prevent water ingress.

This is very important especially in a situation where the kayak rolls over. If water can enter the bin, it is highly likely that it will fill up and make righting the kayak more difficult. Not only does a non-airtight lid let water in, but it also admits warm air. Purpose-made ice bins sometimes lack decent insulation, which makes them less efficient at keeping the catch fresh.

I have found an insulated bag is a better all-round solution because the lid is secured using a zip which prevents water and warm air entering. They are also light and streamlined, so they fit flush with the deck area of the kayak.

One other accessory can make containment of the catch easier, especially when using the rear well area. Reaching behind you to place fish in the rear well area creates problems. When you have a fish that is sizeable, at around four to five kilos or more, it can be very tricky to twist around and manoeuvre the fish into the well area. Uneven weight distribution can put the kayak off-balance, with the potential for capsize.

Using a fish threader, where a length of cord connects to the back end of the bag or bin, can overcome this problem. The cord secures the fish and acts as a conveyer send fish back into the bin or bag. The front end of the line is connected to a stainless rod that allows the fish to be easily threaded onto the line.

To feed fish onto the cord and into the rear well area, first feed the stainless rod through the fish’s mouth, so it comes out on one side of the gill plates. Next, take hold of the fish’s tail and pull all the cord through the mouth and gills using the opposite hand until it is taught. Then, proceed to push the fish down the line behind you. This will direct it head-first into the rear well area, with hardly any need to turn your body around. Use caution with larger fish as the heavier weight can put things off balance a bit.

Once the catch is nicely in the bag or bin, tuck the remaining cord inside before closing the lid. With the right storage in place on the kayak, it’s time to add some seafood. Some kayak anglers consider the insulated storage system sufficient to keeping the catch protected from the elements until they arrive back on shore where a chilly bin of salt-ice waits.

The bin or bag alone is not enough to keep the seafood in perfect condition, especially with the warmer than average temperatures we are experiencing these days. There’s no cooling going on, and at best the fish is stored at ambient temperature. In addition, New Zealand’s sun is one of the harshest in the world, so on the hottest days, any fish lying on their sides will be affected.

The result of this scenario is the flesh on the side facing upwards turning opaque white, indicating it has been partially cooked. Fish should be placed on ice and chilled down as quickly as possible. Why is it so important to do this? The answer is significantly better-eating quality. On top of this, the flesh has a much longer shelf life and is easier to fillet because it has had time to set.

The benefits of cooling seafood quickly are obvclearious, and I’ve tried various cooling mediums over the years, including ice and ice packs. Ice works well, with salt ice the best option because it takes longer to defrost, however, ice can offer limited protection on the kayak.

The most suitable storage system when using ice is the cooler bin because it will continue to contain the cold water once the ice has melted. However, melted ice can be unsafe in the kayak because free water can move around inside the bin, affecting the kayak’s stability.

To overcome this issue, I use ice packs. Ice packs designed for chilly bin use often have special additives in the liquid to prevent them from defrosting. This means they will stay frozen longer and placing half a dozen together in the storage area will form a bed for the fish to lie on. Another option is a custom bag holding a number of ice packs together, which will keep them frozen for even longer periods. When it is the right size to fit your containment area, fish are more likely to land directly on them, and this starts the cooling process right away.

The low profile of an ice pack won’t take up much space, leaving plenty of room for the catch.

When conditions are extra-hot, it’s a good idea to use extra packs to create cool airspace. This can be done by using small plastic bottles filled with salt water. Rectangular shapes are a better choice as they are less likely to roll around.

This system works in two ways,  providing a cold base for the fish to land on and creating cooler air within the space which prevents the upper side of the fish from coming into contact with warmth radiating from the lid or top surface of the bag. Ice pack bags and bottles can also be washed, refrozen and reused many times, which saves you money.

The end result is a catch that has already been chilled before reaching your vehicle, where the seafood can then be transferred into a chilly bin with salt ice or more frozen bottles of salt water. This will cool the seafood down still further and keep it in the ideal state to provide superior seafood of a high eating quality at the end of the day. Not only will you taste the difference, but your palate will also love you for it. 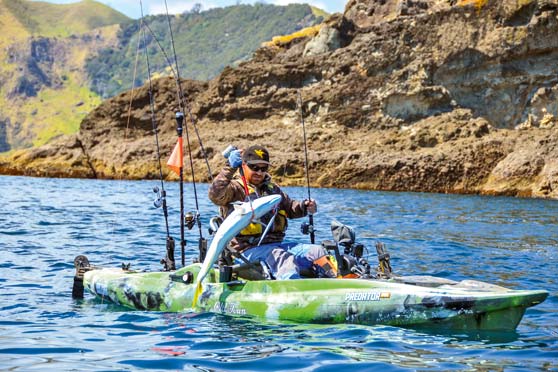 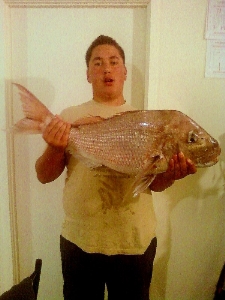