Kayaks have consistently proven themselves as effective platforms for not only catching fish but also for gathering other types of seafood. With so many recognising this, their popularity continues to rise. Rob Fort continues his series on the basics of kayak fishing.

Our recent battle with Covid-19 and the subsequent lift of lockdown to level 3 which allowed anglers to fish from kayaks, but not regular boats, played its part in the humble kayaks’ rise in popularity. It resulted in many taking up this on-water pursuit to alleviate their thirst for one of our favourite outdoor activities – fishing.

With more of us using kayaks as fishing platforms, the need to ensure it is done well is paramount. Setting up a kayak for fishing requires core equipment to be put in place to ensure seamless operation out on the water.

So far in our quest to set up for kayak fishing we have covered the suitable types of kayak and the various aspects of equipment, and have discussed a few common on-water scenarios. In the previous issue we looked at the safety aspect, including personal clothing and communication options. Hopefully you have put in place the items that will give you a much greater chance of sorting an issue or getting help, should it ever be necessary.

The safety side of things is most important, and I can’t reiterate enough just how much you need to take this seriously. If you have not read the previous articles in this series, they can still be found through NZ Fishing News’ digital platform.

In this issue, we continue on the topic of safety – particularly prevention and awareness – so you are fully prepared before heading out in search of the oceans’ bounty.

Most kayak anglers enjoy the freedom their vessel provides as they don’t need to rely on others to assist with handling and launching. This often results in solo adventures. The simplicity and ease of use also means it’s possible to head out for a few hours at the end of the day, often on your own. Solo fishing presents a whole range of potential problems, and often these are not considered until something goes wrong. Some of these have already been covered in earlier parts of this series but there are still a few more to discuss.

The first involves your means of propulsion, in most cases a paddle. Ensure it has a leash attached with a clip on the end so it can be secured to the kayak. Never unclip the leash during your time out on the water because if it’s lost, you are unlikely to be able to retrieve it. A spare paddle should be carried, too, in case your main paddle breaks. If this happens and you have no spare, you won’t be able to make it back to the launch site. 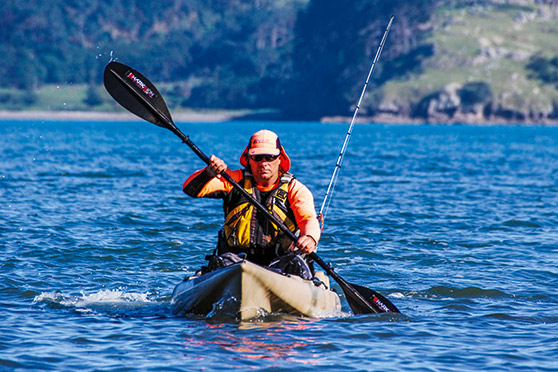 Have a backup plan for the kayak's propulsion system, like a spare paddle.

If the kayak has a pedal-drive system, it’s important to carry spares and tools to do repairs like prop replacement or linkages. You should also carry a paddle in the unlikely event of the propulsion system breaking down completely. Keeping any important safety equipment firmly secured is further insurance that it will be around when needed. 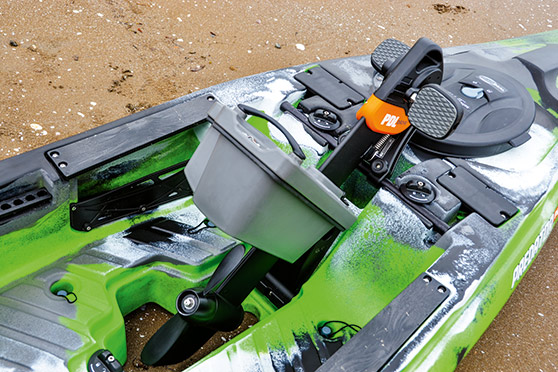 Carry spare parts if your kayak uses a drive system or electric motor.

Tethering yourself to the kayak is something many don’t think about. Falling out of the kayak and getting separated from it, especially during solo missions, is the worst-case scenario. Strong winds and currents are the biggest problem. Both can quickly take the kayak away from you, and swimming after it doesn’t mean you can catch up with it. Try to swim with a personal floatation device on some time. It not only restricts your movements but also creates drag that will slow you down significantly. Even in the situation where the kayak is anchored, you are still at risk of getting carried away by currents should a capsize occur.

Getting back on the kayak

This leads us to the subject of capsize and getting back on the kayak. Sometimes things can go wrong, such as unexpected changes in weather conditions despite a decent forecast. When it happens fast you can be caught out, and a recent incident that resulted in a very close call is worth sharing. 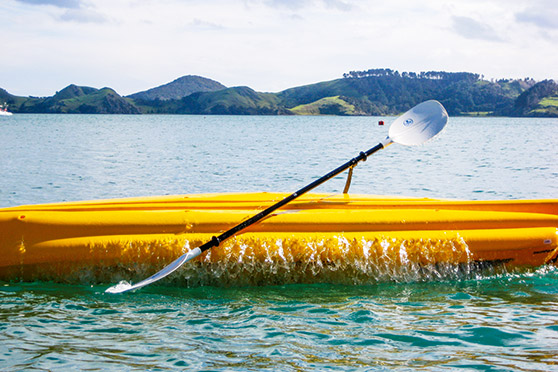 Kayak capsize can happen - are you prepared?

The kayak angler was out on his third day in a row. The conditions started flat, however, a surface chop of up to half-a-metre built as the day progressed. The angler had hooked up to a strong fish when a sudden wave lifted the kayak. The rod was out to the side, he was caught off balance and capsized. He was in an area that had open water and a fast current. Nearby was a very small island and shallow reef, but the kayak and angler were swept away from it very quickly. 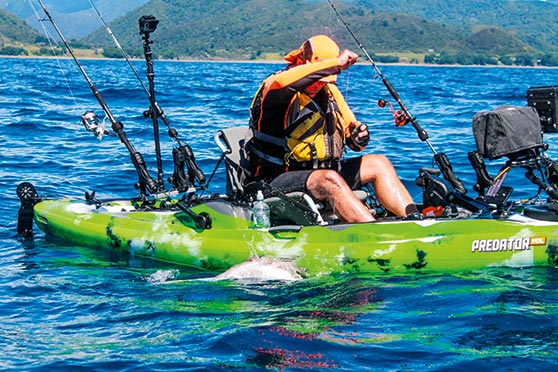 Large fish can put you at risk of capsize if you are not careful.

Luckily the angler managed to stay with the kayak, despite not being tethered to it, and his next move was to right the kayak, which was done without an issue. This person had issues trying to board the kayak, but did manage to get back on, only to capsize again shortly after. By now the angler was starting to become fatigued, which made getting back on even harder and he continued to fail after many attempts.

One problem was the lifejacket getting in the way during re-entry attempts. By now fatigue had really set in and the angler was considering taking the lifejacket off and swimming for an island not that far away. He had also been in the water for at least forty minutes, so the potential for hypothermia was also a concern. Luckily, he decided against it and now completely exhausted, he deployed his Personal Locator Beacon. One of the emergency services advised a local charter operator, and thankfully this kayaker was rescued. The outcome could have been way different if the angler didn’t have a PLB and had no other form of communication.

The cause of the capsize was down to the reel drag setting being too high and being caught off guard by a freak bit of choppy water. The increased leverage caused by holding the rod directly out the side was also a contributing factor. Everything on board, including the rods, were lost because they weren’t attached with leashes.

Finally, we come to getting back on the kayak. The user had recently purchased it and getting back on this model kayak hadn’t been practised before. He had limited experience in this manoeuvre, anyway. This eventually caused him to become fatigued and even when successful, he was so disorientated and off balance that he capsized again.

It is crucial that every kayak angler practices getting back on their craft. This can be easy to do, but physical condition and ability will have a huge influence on success. If you are struggling, then practice is needed to become proficient. Until this happens, resist the temptation to go out by yourself.

Getting the technique right will help. The best position is to lie flat on the water’s surface with your head and arms extended towards the kayak’s seating area. Keeping your body flat like this will make it easier to pull yourself onto the kayak. Start by trying to reach the opposite side of the kayak to further spread your body weight. Then slide your way on board while always trying to maintain an even weight distribution. This will prevent you capsizing again. If you try to get back on with your body hanging directly down beside the kayak, it is likely you will capsize again. Alternatively, if you are unable to do this, try sliding up from the stern of the kayak. Not only should you get proficient at doing this, but you should also practice it periodically to stay in condition.

It’s important also to consider that if a capsize does happen, you are likely to be in conditions that are less than desirable, which will make the whole exercise more difficult. A change of kayak also warrants getting familiar with this aspect on the new craft. If you cannot get back on board without assistance, then go with other kayak anglers.

With the safety procedures in place and the necessary equipment organised to operate your kayak successfully, it’s time to cover the fishing side of things in the next part of this series. 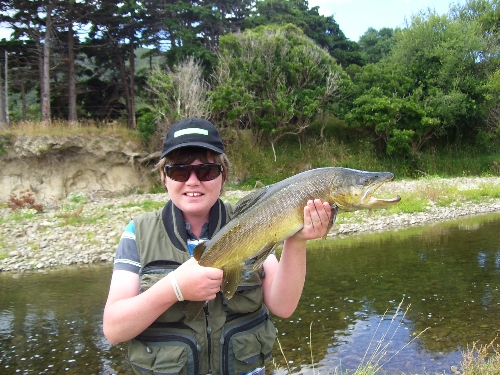