We left the OBC on Auckland’s Tamaki Drive just before the sun peeked over the horizon, heading for the area off Tiritiri Matangi Island where there had been plenty of snapper action. The crew included Sam Mossman and I, along with two Black Magic Tackle representatives in Tim Clark and Steve Newland. We were armed to the teeth with all manner of product to target kingfish and snapper.

The night before I had called at my local Top Catch store and picked up a salmon berley, a bag of redplate pilchards and some squid, along with plenty of salt-ice.

We made the most of the early bite to pull some snapper from under and tease some kingfish around Shearer’s Rock until they went off the chew.

Upon giving Gulf Harbourbased charter operator Rex Smith a call, he said they were getting a few fish a couple of clicks out from nearby Wellington’s Reef, but were expecting better action once the tide turned.

We arrived in the area with plenty of fish showing on the sounder, all tucked hard on the bottom with all but a handful of small fish resisting our offerings.

We ended up anchoring near to Rex’s boat Kiwi Angler and deployed the berley with quick results. The fish came on the bite and the cut and whole baits were snaffled up, resulting in a respectable catch gracing the IceyTek. Steve supplemented our bait supplies with jack mackerel enticed out of our berley and these were also put to good use.

The point of the above is that while lures are great fun and convenient, they do not always have it their own way in the fish-catching stakes – bait is sometimes best. 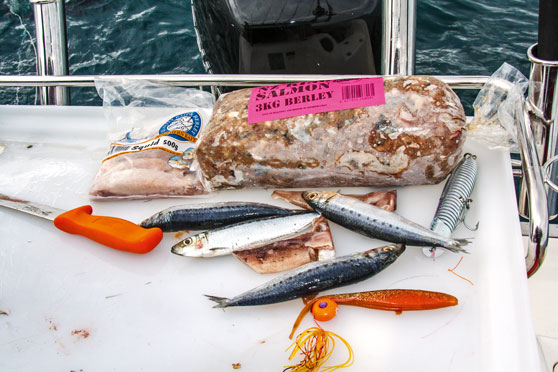 Over summer when fishing out of Waipu, we don’t do a lot of straylining, but we do mix it up and always take a little bit of bait with us on what are primarily lure fishing excursions where we drift over the deeper offshore pins.

What we did last summer was buy our free-flow pilchards and squid in bulk and then, while they were still frozen, repackage them into smaller bags of a dozen or so. We would take several off these smaller packs out with us, just thawing what we needed, the rest, if un-used, going back in the freezer until next time. 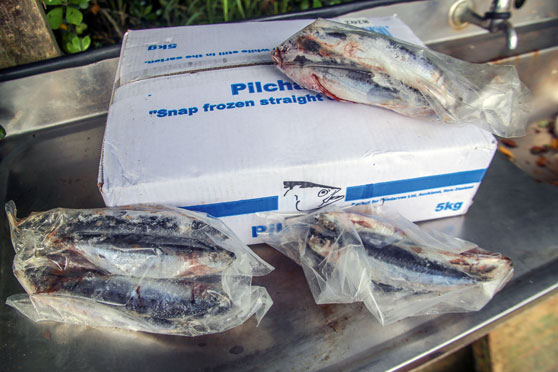 This gives you the price advantage of buying quality bait in bulk, while keeping it in great condition until needed. If you take a bulk box out with you and don’t use it all, then you lose both its quality and free-flowing nature when re-freezing the unused portion.

Buying in bulk enables you to take advantage of the bait ‘specials’ as they come along, even if you don’t need to use it all on the one trip.

We quite often used jack mackerel as live or dead baits. At the end of the day any unused live or dead baits are kept and packaged in small bags of 8-10 fish, depending on their size and then reused on the next trip as cut or butterflied baits.

Slow jigs, sliders and inchiku lures can all be enhanced with a sliver of bait. Squid legs, or finely cut strips of the mantle, can be attached to the hooks as a natural attractant. I have had sessions where the un-baited lures weren’t touched, but those with a little natural enhancement were repeatedly hooking up. The next time you head out, hedge your bets and take some bait with you along with your lure bag – it may make the difference between a respectable catch and a bare bin.