A guide to the wharves of the upper North Island 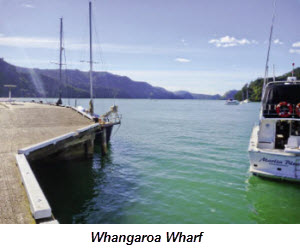 Here’s a list of well known wharves in the northern half of the country that are well worth a visit (with thanks to Nik Hannam for helping me compile this list). It would be great to hear from more knowledgeable readers about wharves in other parts of the country, too.

A popular wharf with a reputation for producing good kingfish, kahawai and trevally, with reasonable snapper fishing at dusk. Piper and jack mackerel are said to be abundant.

A regular producer of good kahawai and john dory, with consistent kingfish appearances in summer and some reasonable snapper fishing at dusk.

An excellent kahawai producer, with regular kingfish appearances in summer. Parore and trevally are caught on shellfish baits cast out into the channel.

Often crowded and busy with boats and people, the wharf is said to be a good producer of john dory and kahawai, with trevally also available in the winter months. Kingfish are reportedly present in summer, but would be very difficult to successfully land in this environment.

Ferry Landing, Whitianga Harbour: Said to be better than the main wharf at Whitianga, but tide dependent. Kingfish, kahawai, and trevally are reported. 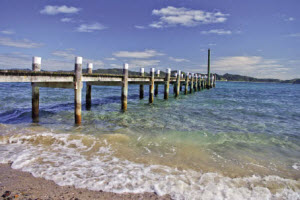 A pretty little jetty in a quiet corner of the harbour that’s a popular fishing hang-out for local kids. Kahawai, small snapper, parore and trevally are reported, along with some summer kingfish.

This is a nice long jetty that extends out across shallow water to deeper water on the main harbour channel. Not much information is available, but it looks like a good fish producer.

Barely a wharf – more of a manmade rock platform, but mentioned here for its uniqueness. Found alongside the coast road extending north along the peninsula from Coromandel, the Granite Jetty is said to be good for snapper, kahawai and some nice-sized kingfish.

The wharf used by many Coromandel charter boats, it looks good but is surrounded by moored boats, and there are few available reports about the fishing there. It looks like Coromandel locals have plenty of better land-based options close at hand.

Enjoying a huge reputation at the moment, it seems to get better as it gets busier. Plenty of legal snapper (and a lot of undersized fish too), regular visits by kingfish, and some nice kahawai. Plenty of big jack mackerel at night. Expect crowds.

An old-time favourite and a solid producer of kahawai, snapper, and trevally. Kingfish are regularly encountered, but there is plenty of underwater structure to get busted off on. The best part of the wharf is currently closed due to safety issues.

Reported to be a good producer of snapper and kahawai. Crowded.

A good summer producer of snapper. Plenty of piper too, plus occasional kingfish. 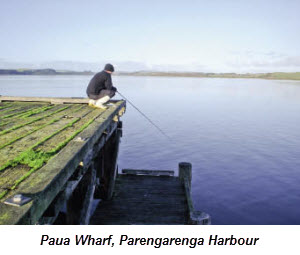 Produces kahawai, plus trevally and parore on shellfish baits. Also an occasional kingfish, but best known as a squid location at night.

The old Marsden Point Wharf used to be a fantastic fishing spot with big numbers of trevally, parore, kahawai, kingfish (no size limits in those days) and john dory being caught. It has been filled in and is part of the new log-loading development. There are new jetties on either side of the new logging port development, but neither has a great reputation as a fishing location. However, both are said to be big producers of squid.

This used to be a rickety little structure that produced piper, pannie snapper and a few nice kingfish. Apparently it has been replaced by a new wharf of similar size, and is still a good fishing location.

A busy wharf that is crowded in the holiday season. A consistent producer of snapper, trevally, john dory and parore, with lots of feeding kahawai and jack mackerel under the lights at night. Despite large quantities of baitfish around the wharf, kingfish are only rarely caught. Best fishing for legal sized snapper and trevally is in autumn and winter.

There is usually plenty of room to fish on this wharf. Situtated at the mouth of the Kawakawa River, it is not worth fishing after heavy rain. Best fishing is in autumn and early winter for some nice snapper in deep water off the front of the wharf. Trevally can be caught around the piles in winter and spring. Good kahawai fishing all year and loads of big parore around the piles.

Very crowded and busy, and shallow at low tide. Does produce plenty of kahawai. Watch out for big stingrays picking up your bait.

Consistent kahawai fishing and a few john dory and trevally.

A lovely, easy to fish wharf with great scenery all around. Not a great fish producer, although there are plenty of pannie snapper during summer and autumn (and plenty of undersized fish too). Around the wharf piles there are abundant baitfish. Kingfish make irregular visits to this wharf and john dory are caught during the cooler months. Kahawai fishing is said to be good in spring. Parking is extremely limited.

A Northland wharf with a huge reputation. A big producer of kingfish on an incoming tide in summer and a consistent producer of kahawai, john dory and trevally. This is, however, a busy commercial fishing wharf and quite high off the water. Kingfish can be difficult to land and there are often fishing boats tied up alongside. This wharf would be a fantastic attractor of tourists and a brilliant fishing location if replaced with a modern facility.

Not an easy wharf to fish due to the way it sits sideways to the prevailing current. Said to produce kingfish and trevally like Pukenui Wharf, but nowhere near as popular.

One of the more famous fishing wharves 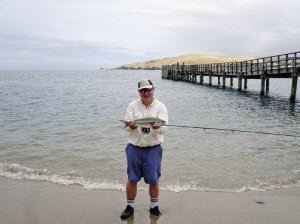 in the country. Can experience huge kingfish runs on the right tide, at the right time of day during summer. Also produces many john dory and some very big trevally. Snapper are caught too, and occasionally monsters are taken on live baits. The locals, however, prefer to walk up the channel edge at low tide and fish for snapper by surfcasting into the harbour holes.

The seafloor around the wharf is riddled with snags, and many fish are lost on underwater structures. Best fishing is achieved by locals who fish off the back of friends’ boats tied up to the wharf. A great fish-producing wharf, but one that will drive you mad.

Barely a wharf. It is old and in a state of disrepair. Do not drive onto the wharf. Can be a good producer of trevally. Kahawai are consistent and kingfish make regular visits. Underwater structures are many, so it can be difficult to land trevally and kingfish here. Snapper fishing is better at locations further away from the wharf along the channel edges at low tide.

Another famous fish producer. Kingfish runs are consistent during the summer and it is a very good producer of trevally and kahawai. However, the wharf is small and exposed to easterly winds. On warm sunny days expect to share the wharf with most of the local kids, who like jumping off it into the channel. A freezing day in winter with the wind blowing in your face is perhaps the only time you’ll get this wharf to yourself.

Wrapped in strong currents and not very large, it is said to be a producer of kahawai, trevally and pannie snapper. However, most locals surfcast off the white sandy beach right alongside for better results.

A real ‘wild west’ wharf that is battered by remnants of the huge swells that hit the Hokianga Heads and harbour entrance close by. A consistent producer of kahawai that has lots of baitfish and schools of big jack mackerel. Some very large kingfish visit this wharf, but there are underwater structures and rocks all around. Being so close to the open sea, unexpected fish have been reported here, such as mako sharks and schools of skipjack tuna. On a good day, with blue water pouring in through the harbour heads, this wharf can be an awesome place to visit. On a cold grey day it is exposed and horrible.

A wharf with a great fishing history that produces large numbers of small snapper. Unfortunately many can be undersized. There can be nice-sized trevally here though, and kingfish make occasional visits in the summer months. A great fishing wharf for kids. Expect crowds during school holidays. 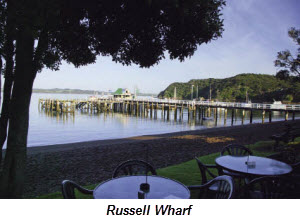 Another popular wharf with a growing reputation as a good fish producer. Legal snapper are regular catches in late summer and autumn, and there can be runs of trevally during the cooler months. Kingfish make regular visits to this wharf during the summer months and some nice specimens have been caught. The wharf is small and the walkway narrow. Expect it to be crowded with little room to move.

A regular kahawai producer by all accounts, but also some big yelloweyed mullet, lots of stingrays, and regular encounters with sharks. A popular spot that has plenty of room for everyone.

Often listed as a “great place for kids to catch sprats”, the Raglan Wharf can actually produce some quality fish at times. Good kahawai and trevally are reported, with summer runs of nice-sized kingfish. Parore are said to be abundant.