Hosted annually by the Bay of Islands Swordfish Club, the iconic light tackle Yellowtail Tournament marked a major milestone in June 2019, celebrating 50 years since its inception in 1970. Helen Horrocks investigates the reasons behind the success of this popular event…

Horses in hotel rooms, sharks in the swimming pool, blow-up dolls and blokes in wigs: the history of the Yellowtail Tournament might at first sound more like a stag party than a fishing contest. But while mischief and pranks are a regular feature, it’s the size and abundance of the famed Bay of Islands kingfish that have kept anglers from both sides of the Tasman enthralled for half a century. 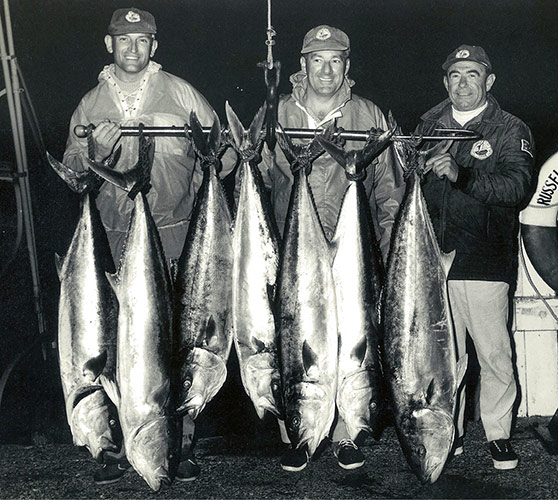 Now one of the oldest fishing tournaments in the country, second only to the NZSFC Nationals, the contest is never short of keen entrants. Most of them return year after year, and the 50th anniversary sold out in record time. So, what’s the secret to the event’s unwavering popularity for five decades?

As I chatted with Bruce ‘Smithy’ Smith, past president of the Bay of Islands Swordfish Club, and convener of this year’s Yellowtail Tournament, one phrase came up repeatedly.

“It’s all a bit of fun”, he says, casually brushing aside any misconceptions I had about the tournament being a prestigious and exclusive affair.

You only have to read the original Challenge to see the tournament’s instigators didn’t take the whole thing too seriously. The hand-written and lovingly illustrated parchment, on display at the Russell clubrooms, was created by a group of Australian anglers visiting from Sydney Game Fishing Club. 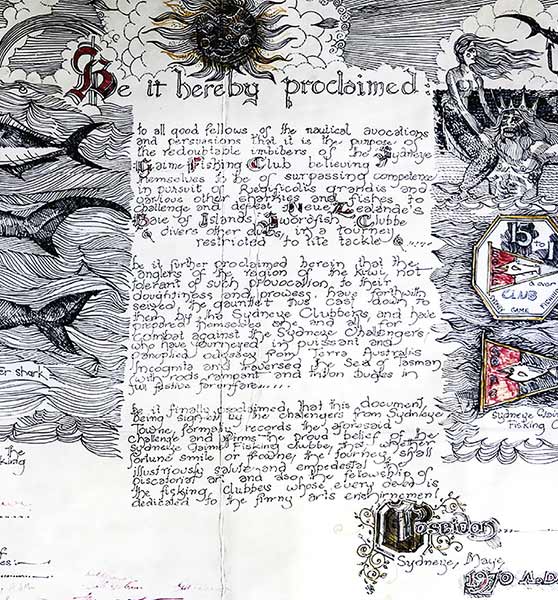 'The Challenge' set down by Sydney Game Fishing Club in 1970. The original is on display at the Russell clubrooms of the Bay of Islands Swordfish Club.

“It was a New Zealand versus Australia challenge”, says Smithy. “A couple of Aussie guys saw the size of kingies the Bay of Islands guys had caught, and they threw down a challenge. So the Bay of Islands Swordfish Club got a bunch of guys together, and then they did it the next year, and the year after.”

Among those responsible for getting the tournament off the ground were local fishing legends at the time, Jack and Barbara Brittain. Jack was on the committee at the Swordfish Club, and being a keen kingie fisherman himself, was only too happy to be involved. Barbara represented the Bay of Islands Swordfish Club as part of a ladies team in the first ever tournament.

“It was Dad’s cup of tea”, says Chris Brittain, Jack and Barbara’s son, and a respected Bay of Islands charter skipper in his own right. “It was his baby”.

Chris provides another clue to the tournament’s enduring popularity.

“There was often talk of bringing in a calcutta and money [for prizes]”, he says, “but money kills tournaments, it takes the honesty out of it, so they refused to have it. People think there must be some good cash prizes, but no, there’s just the perpetual trophy, and a bottle of Southern Comfort that goes with it.” 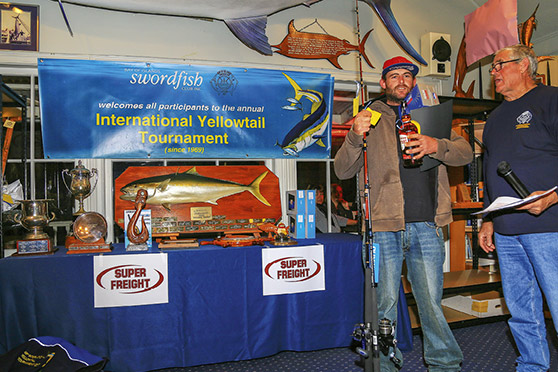 Blair Millar of the Anglers Anonymous team receives the spoils of victory from convenor Bruce Smith. The event is more about trophies than huge prizes and money.

These days, there’s more than the original handful of trophies to be won, with around 20 different sections contested. A tag-and-release section is now well established, and a measure- and-release section has been added too, as organisers look towards the next 50 years and the sustainability of the fishery. But the tradition of competing for trophies, rather than prizes, holds firm.

Line classes fished in the tournament are 6kg and 8kg (although originally it was fished with 12lb and 20lb), and there have been several world record catches over the years, including two set by Barbara Brittain in 1976.

Smithy first took part in 1978, and has only missed one since then.

“There’s been two men’s world records caught in the tournament, that I know of”, he says, “and fortunately they were both caught on my boat.”

Both were 6kg line class world records for yellowtail, and the most recent record was set in 2007 by his son, Matt Smith. 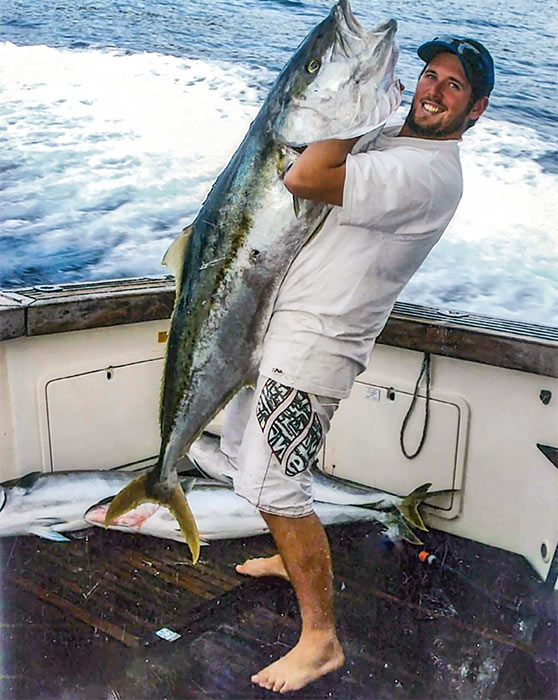 “That was a hell of a fish,” says Smithy. And by most people’s standards, it would be a hell of a fish on any line class, let alone 6kg. The 37.8kg kingfish took two hours, 50 minutes to land, after it inhaled “a monster of a bloody koheru”, as Smithy puts it.

“We had some 20kg kingis in the boat and this thing was twice the size”, says Smithy. “It made the other fish look so small I started thinking maybe I overestimated them. So we hung them up first and when they went 20kgs we knew the other one was a beauty.”

Matt’s fish still stands as the men’s world record yellowtail on 6kg line. The previous 6kg record, at 30.99kg, was also caught on Smithy’s boat by John Bolland in 1986. 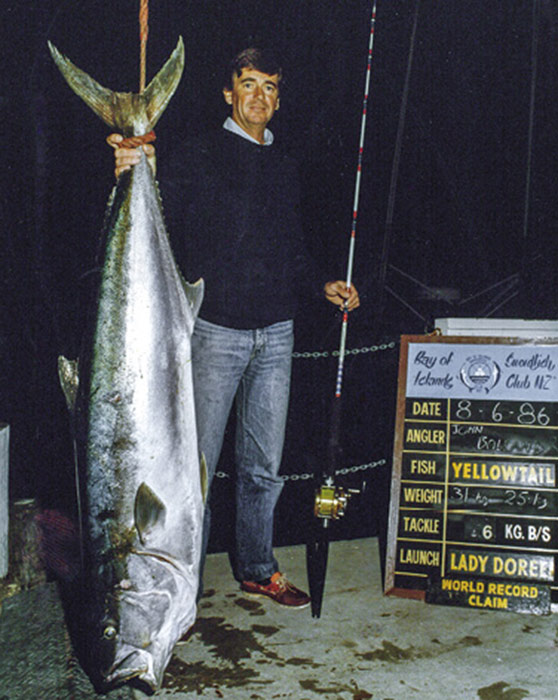 Although the first Yellowtail Tournament was held in July 1970, it was moved to June when it was thought the kingfish would be bigger and fatter. Teams of anglers fish four days out of a week, with lay days set aside for bad weather, and prizegiving on the final day. Each morning the fleet, comprised mainly of Bay of Islands charter boats, departs to fill their tanks with the livebaits of choice – koheru.

“In the early days, they [kingfish] were all caught on live kahawai”, says Chris Brittain. “Nobody had ever heard of koheru. But if we’d had them back then we’d have caught twice as many kingies!”

There’s always one that breaks the mould though, and it was Aussie angler Terry “Titch” Titchener and his team who were the first to bring jigging to the tournament. One of the characters of the Yellowtail Tournament is Aussie angler Terry 'Titch' Titchener who is well known for his practical jokes.

This was much to the disgust of traditionalists like Dr. Roy Wade – a regular competitor from Christchurch – who reportedly fished all day in a tweed suit and tie with tweed hat, carefully placing his bookmark and putting his book down to play a fish when required. He was not impressed with the Aussies or their jigs, and wasted no time declaring that jigging was not the way to catch kingfish.

Of course this just made him a target for the trickster Titch, as Smithy recalls.

“Roy used to hang his hat in the corner of the clubhouse as he came in. But he gets up to leave one night and his hat’s gone. Well, World War III erupted!”

Eventually prizegiving rolled around, and Titch took the stage.

“He’s got this brown paper bag”, says Smithy, “and he asks Roy to come up and says: ‘Dr. Wade, we hear you’ve lost your hat, and we thought it was most unfair, so we hope you’ll accept this one in its place.’ So he gets out this hat, and it’s Dr. Wade’s hat, but it’s got all these big iron Henchman jigs hanging off it! Well, it brought the roof down! At least Roy saw the funny side of it.”

Titch continues to fish the tournament to this day, making the trip over from Australia every year. Although word has it jigs don’t feature much in his arsenal any more.

Before I leave, I ask Smithy if he’s got anything big planned for this year’s 50th anniversary. “Oh yes, we’re going to ring all the bells!” he says, without divulging details.

And the horse in the hotel room? Well, Smithy and Chris are tight-lipped on that one.

“What goes on in Russell stays in Russell”, Chris says with a smile. And perhaps that’s the way it should always be. 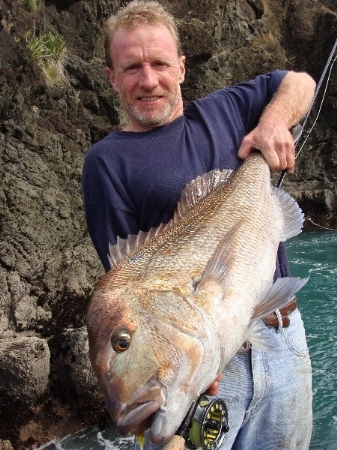